Sony takes home the gold with a total game changer 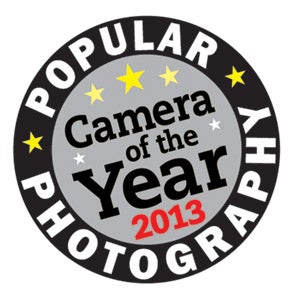 This one came way out of left field—thrown to home plate by a mighty arm. The Sony Alpha 7R represents not only the most substantial refinement of the interchangeable-lens compact (ILC) camera to date, but also a redefinition of the entire concept of the high-end system camera. The camera that best refined or redefined photography in 2013? Unquestionably, it is the diminutive (but full-frame) high-resolution Sony Alpha 7R.

We pretty much know it’s going to be trouble when Sony people show up near the end of the year with a bag or two of new stuff. By October, our editorial team had settled on the finalists for 2013 Camera of the Year, and, with no other potential competition on the horizon, we were just about to decide the winner. In anticipation of the shoot for this January issue, we had booked our studio photographer. A few days later, out of the Sony bag came the Alpha 7R and 7 cameras. They looked like super-compact DSLRs, but they turned out to be mirrorless compacts. With full-frame sensors. The “gulp” in the room was audible.

But to get in under the wire for Camera of the Year eligibility, a production model had to be vetted in the Popular Photography Test Lab within that year. That’s the rule: It’s not enough that a camera is a groundbreaking design, or that it’s a substantial upgrade of an existing model. It must go through our full battery of tests to be eligible. It has to perform, and perform very well. The results of the 7R’s test can be seen in our report HERE.

The camera actually outperformed our expectations, given the relatively small size of its body—smaller in volume than the Leica M, with considerably more electronics inside. Given the cramped interior quarters, there’s not much of a heat sink for a 36.4MP full-frame sensor, and heat buildup is a major cause of digital noise, which can also rob resolution. But the 7R proved competitive on all our test criteria with the Nikon D800, the highest-resolution digital camera available short of going to a (far pricier) medium-format camera.

Impressive as the 7R’s imaging power is, it’s all the more impressive for the package it comes in. This camera was clearly designed for pros and serious amateurs, with its tough, weather-sealed body, logical and ergonomic controls, superb electronic viewfinder (who needs a pentaprism?), and built-in connectivity. And the 7R came out of the bag as part of a full system, including five lenses and more to arrive soon (see the test report for details). There’s a vertical battery grip, the HVL-F60M electronic flash/video light that allows for wireless radio TTL, stereo mics for video, and more. We’re confident that Sony will thoroughly build out the system.

We should note that this time, our Camera of the Year award is very much an award for the system as well as the individual camera. Sony’s Alpha 7 variant—with lower resolution (still, a beefy 24.3MP) but an enhanced autofocus system and a slightly faster burst rate than the 7R’s—might be a better choice those photographers who don’t need humongous resolution.

While we’re nitpicking, we’ll point out that the 7R’s resolution comes at the expense of more noise at higher ISOs. Canon’s EOS 5D Mark III, our 2012 Camera of the Year and still the reigning low-light champ, is way ahead of the 7R in this regard, with acceptable noise through ISO 25,600; the 7R hits this boundary at ISO 1600. We wish the Alpha 7R had some way of triggering accessory flashes without using another flash as a master. (Hint to Sony: how about a trigger unit for the hot-shoe?) And a camera at this level should have a second card slot rather than a single SD.

But overall, the 7R has us convinced that ILCs can fully cut it as pro cameras. The introduction of this camera system even has us wondering whether the days of the single-lens reflex are numbered. It certainly is a shot across the bow of the two DSLR biggies, Canon and Nikon, whose ILC offerings to date have seemed, to put it plainly, halfhearted.

And the Others…
Two other cameras made it to our list of 2013 finalists: The Canon EOS 70D and Sony’s own Cyber-shot RX1. (This isn’t the first time that two Sony models competed for Camera of the Year.)

The 70D marks the seventh generation of Canon’s double-digit-D series of midrange APS-C-format DSLRs—quite a run. But it’s a measure of how much we at Pop Photo have been spoiled by this decade-old line of cameras that we were a bit disappointed in the 70D’s Excellent-rated still imaging performance, which, with resolution of 2630 lines, was “only” incrementally better than its predecessor 60D‘s. Still, we were thoroughly impressed with the 70D’s so-far unique Dual Pixel CMOS autofocus system, in which twinned pixels can perform phase detection over most of the area of the sensor. The result is extremely smooth and sensitive video and live-view autofocus. Using a smartphone to trigger a Steadicam-mounted 70D via the camera’s built-in Wi-Fi connection, we were able to capture smooth, sharp video on the move.

Moreover, we’re pretty certain that Canon will be able to speed up the Dual Pixel CMOS AF for extremely fast autofocus for stills. (Hey, Canon, will that come in a firmware upgrade?) Beside that, the 70D gives you bursts of 7 frames per second, very fast conventional AF, an articulating 3-inch LCD, and a rugged build. For its $1,199 street price, it’s an attractive option for serious amateurs and budget-minded pros alike.

As for the Cyber-shot RX1, they said it couldn’t be done, and Sony said, “Oh yes, we can.” The only fixed-lens full-frame digital compact in cameradom, the RX1 is as much a showcase of technological know-how as it is a picture-taking device. While its 24.3MP CMOS sensor is very similar to that of the Sony Alpha 99, just about every other piece of the camera was purpose-designed for it. The lens, for instance: its 35mm f/2 Carl Zeiss Sonnar T* was formulated specifically for the sensor, and it extends more than halfway into the camera body for compactness.

The RX1 takes pretty good pictures, too. It resolved 2870 lines in our test for an Excellent rating, and kept noise at acceptable levels through ISO 3200—impressive, given that sensor heat buildup in small cameras can result in more noise. The camera fell short of an Excellent overall image quality rating because its color accuracy score, oddly, just missed the Excellent mark.

For most of us, the main drawback of the RX1 is its price—a sticker-shock-inducing $2,798, street. But despite the hefty pricetag, people are buying it for the great imaging, sturdy body, well-designed controls, and generally upscale vibe.

Our sole criterion for Camera of the Year: That it be the model that best refined or redefined photography in the past year. Our finalists represented one important refinement, in Canon’s new AF system on the EOS 70D, and two astonishing redefinitions of what a compact camera—fixed lens or interchangeable—can do. But when our final test results came in, we realized it was simply no contest. And so with the Alpha 7R, Sony wins an unprecedented fourth Camera of the Year citation.

The Year of the ILC
If this year’s Camera of the Year award were limited to Micro Four Thirds cameras, it might well have been a tie. The year 2013 saw tests of the two best Micro Four Thirds ILCs you can buy today, the Olympus OM-D E-M1 and the Panasonic Lumix GH3.

When we awarded the 2008 Camera of the Year to the world’s first interchangeable-lens compact, the Panasonic Lumix G1, this was more in recognition of the exciting new path it promised to blaze rather than sheer imaging power.

In 2013, Olympus and Panasonic showed us just how much imaging power these cameras can actually muster. Both the E-M1 ($1,399, body only) and GH3 ($1,298, body only) earned Excellent overall image quality ratings from their lowest ISOs through ISO 400 in Pop Photo Lab tests. Those are impressive results, given the relatively small size of Four Thirds sensors (about one-quarter the area of the 24x36mm full frame). Both employ similar pixel counts (16.3MP for the Olympus, 16MP for the Panasonic) and both have robust, weather-sealed magnesium-alloy bodies.

The petite Olympus E-M1 maintains cleaner images at higher ISOs—acceptable noise levels through ISO 3200—whereas the Panasonic GH3’s images showed unacceptable noise at ISO 1600. The larger (some say too large) GH3 is a better video camera, with recording at 1920x1080p60. With phase-detection elements embedded in its sensor, the Olympus’ autofocusing proved faster than the Panasonic’s. The E-M1 is the knobbier camera of the two, with lots of buttons, dials, and levers for controls, while the GH3 has one of the best-designed touchscreens around (and plenty of external controls, too). Can’t decide? Buy them both—they use the same lensmount.

While these models are proof that Micro Four Thirds has matured into an enthusiast’s format, competition this time around was just too tough. for either to take home Camera of the Year honors.

A look back at some of our past winner: