A superstar proves its speed and power 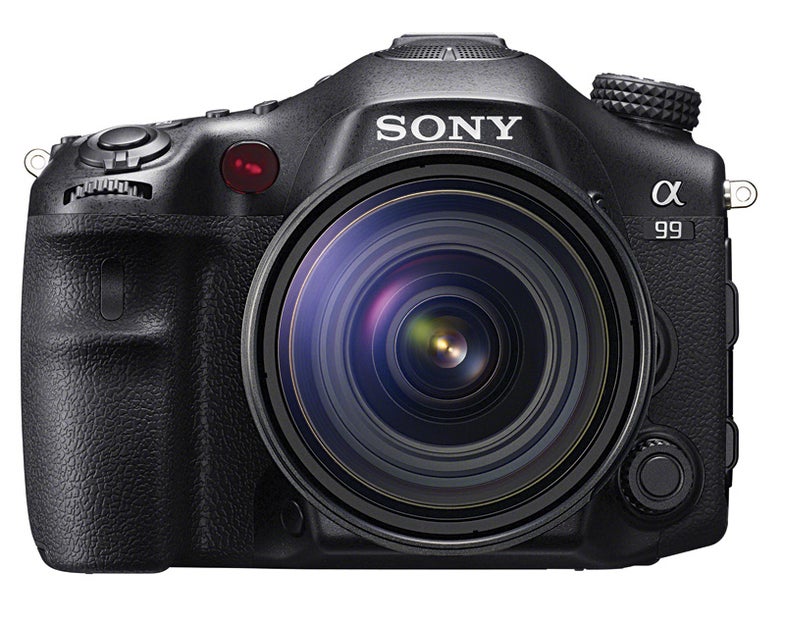 The A99 is the first Alpha to eschew the unique Minolta-type hot-shoe in favor of a conventional type that can accept a number of new accessories for Sony's Alpha and NEX cameras.
SHARE

We took a preproduction version of the Sony Alpha 99 ($2,798, street, body only) out for a field test a couple of months ago. We thoroughly enjoyed the various innovations that Sony built into its latest transmissive-mirrored camera body—the first of its kind to sport a full-frame sensor. But we never make our final assessments of image quality or other performance criteria until we can test a final production sample. That time has come.

In the Test Lab
The A99 impressed us with an overall image quality rating of Excellent from ISO 50 through ISO 1600. Ironically, though this is a full-rame DSLR, the limiting factor here ended up being noise. To compare, while we saw Canon’s EOS 5D Mark III hold noise to a Low or better rating all the way up to ISO 12,800 in the test in our July 2012 issue, the A99 could make that claim only to ISO 1600. (This doesn’t mean the images are horribly noisy; it just means the Canon’s are cleaner.)

Even at its lowest sensitivity of ISO 50, the A99 showed a noise score of 1.6, good enough for a Low rating on our scale. But compare that to the 5D Mark III that scored 0.9 for an Extremely Low rating. While the A99 holds its Low rating up to ISO 800, the Canon doesn’t reach a Low rating until ISO 6400. By that point, the A99 already hits Unacceptable territory in our test. Nikon’s D800 also became Unacceptable by ISO 6400, but showed lower noise at ISO 50 with a score of 1.3, earning it a Very Low rating.

Interestingly, Nikon’s recently released D600 uses a Sony-made 24.3MP full-frame sensor that many people speculate is the same one used in the A99. However, Nikon was able to keep noise to a Low or better rating all the way up to ISO 3200.

One place where the Sony A99 did exceptionally well is in autofocus speed. This is a new Hybrid AF system, so it’s especially impressive that the A99 proved the fastest in its class. At EV12, the brightest light level in our test, the A99 showed blazing speed by focusing in 0.27 second. It wasn’t until EV6, the equivalent of a very well-lit room, that it fell to 0.36 sec, faster than either the 5D Mark III or the D800 at their best. Even down in the moonlight-like level of EV –1, the A99 focused in less than a second. At EV –2, the dimmest in our test, AF became significantly erratic in its speed, but averaged about 1.14 seconds.

In the field, though, we noticed that the AF sometimes faltered in dim light and hunted quite a bit. This became frustrating and ended up in a few missed shots during one shoot. While this didn’t happen often, it did shake our confidence in the AF a little.

In the Field
We covered most of our field testing observations in our November 2012 Hands On report on a preproduction model, and nothing changed for the worse in the final production sample of the A99 that we tested this time.

However, we want to give a shoutout to the focus-peaking feature, which wasn’t operative on the early sample—this can be amazingly helpful when you focus manually. When shooting portraits, for instance, you can see the surface of your subject’s eye light up to let you know that your focus is spot on. With landscape shots, you can see the focusing distance and place it in the perfect location in the scene. Rarely do we encounter a new feature as helpful as this one.

The Bottom Line
Even though the Canon won our 2012 Camera of the Year award (see page 58), the Sony A99 remains one of the best new cameras we’ve seen this year. It shows that the new perspectives being brought to photography by the likes of traditional electronics companies are having a positive effect on the progression of photographic technology.

If you’re a Sony shooter already and looking for a full-frame body, the A99 is a no-brainer. If you’re considering your first DSLR, you can feel safe investing in the Sony system.

The A99 is just another reminder of how serious Sony is about this business and how intent it is to be among the top echelon of camera makers. If the past few years are any indication, it will play a major role in bringing photographic technology to new heights.