The camera that best refined or redefined photography 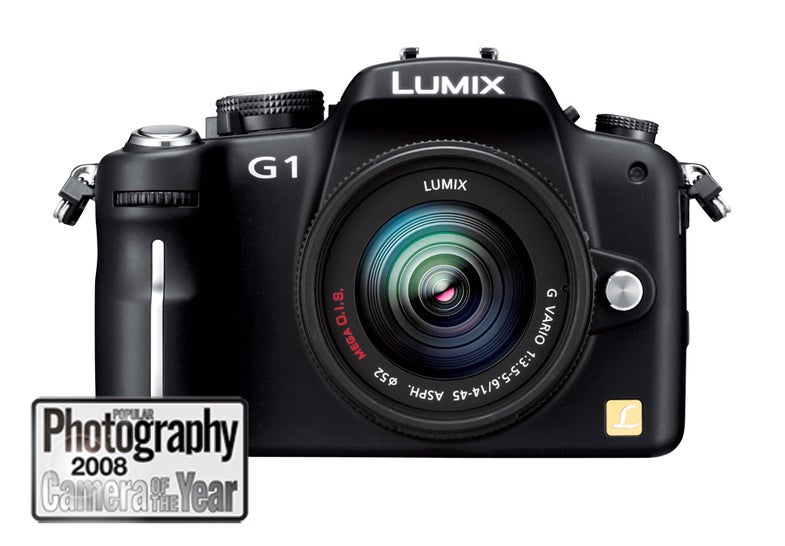 When the history of DSLRs is written, 2008 will go down as a year of big breakthroughs.

• Nikon introduced the first DSLR to shoot high-def video — the D90.
• Sony brought sensor-based stabilization to a 24.6MP full-frame camera — the A900.
• Canon blended the full-frame format with high-def video and stereo sound — the EOS 5D Mark II.
But as far as we’re concerned, the most intriguing camera is a little unit that isn’t a DSLR and packs neither infinite megapixels (just 12MP), no image-stabilization (only in its lenses), nor video capture. And, it’s kind of expensive ($800 with a kit lens).

Yet the Editors of Popular Photography named the Panasonic Lumix DMC-G1 the 2008 Camera of the Year.

The reason? In a contest where the criterion is “the camera that best refined or redefined photography,” the debut of the G1 represents a re-defining moment.

In simplest terms, it’s an electronic viewfinder (EVF) camera with interchangeable lenses. Yet in historical terms, this small camera could be the forerunner of The Next Big Thing.

It is, after all, a new format — Micro Four-Thirds. It couples a DSLR-sized sensor from a Four Thirds System camera (such as an Olympus or Panasonic) with a new breed of lenses that are about half the size of a conventional DSLR’s. At the same time, instead of a prism viewfinder and mirror-box mechanism, there is an EVF. Grainy, shaky, slow to respond? That was yesterday’s EVF. The viewfinder and camera-back LCD on the G1 are amazingly crisp and accurate. And the EVF even lets you do things you can’t with an optical viewfinder. For instance, you can set it to zoom in on your subject while you focus manually.

As the Certified Test Results from the Pop Photo Lab show, the G1 delivers DSLR-caliber resolution and picture-taking potential without being a DSLR. Small size, interchangeable glass, and (not in the G1, but in the next iteration for sure) HD-video capture will make the Micro Four Thirds cameras a truly new class that should appeal to those moving up from compact or standard EVF digicams.

No, none of us will be trading in our DSLRs for a G1. After all, the lens selection can, at this point, be counted on two fingers; the camera’s high-ISO performance isn’t especially good; the lenses are small, but the camera’s body isn’t appreciably smaller than the tiniest DSLRs (such as the Olympus E-420 and Pentax K2000); and, as good as it is, the EVF isn’t yet as sharp as a DSLR’s prism viewfinder.

In other words, much like Apple’s first iPhone, the G1 is expensive and imperfect. But like the iPhone, it is brave, and forward-thinking.

It doesn’t take a visionary to see where the concept of a mirror-box-free camera with a sophisticated electronic viewfinder can go. In fact, shortly after Panasonic announced the G1, Olympus showed its own Micro Four-Thirds “concept camera” (basically, a block of highly decorated wood with a lens stuck on). What was so interesting is that instead of resembling a shrunken DSLR, the Olympus had the lines of a tiny classic rangefinder. Will such a unit ever see production? Who knows? But with the Micro Four-Thirds approach, it’s definitely possible. And the possibilities represented by the G1 certainly could redefine photography.