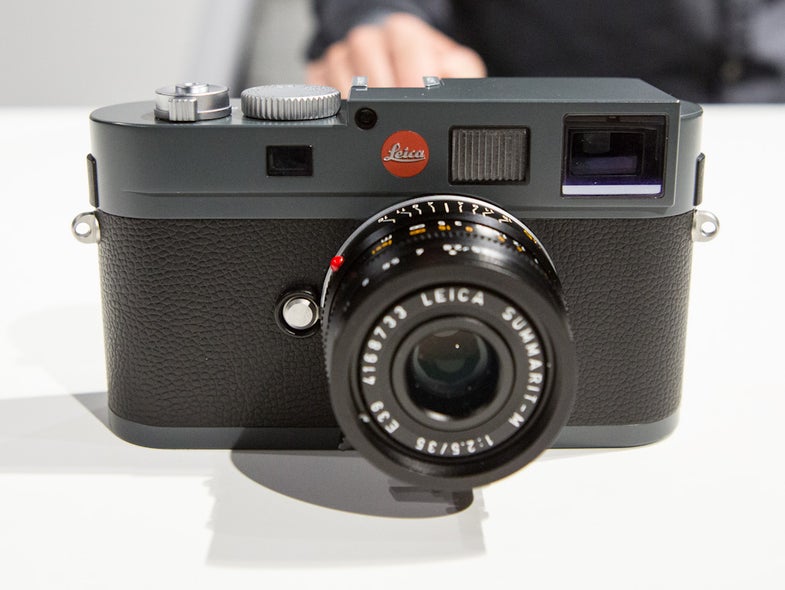 Take a quick look at the exhibitor map and you’ll notice that Leica has an entire hall of Photokina dedicated to its brand. This is their home turf after all, but they also just announced some of their biggest product updates in quite some time. I got to spend some time with their new cameras in their mammoth booth. Here are some first impressions on some cameras most of us will likely never be able to afford.

Since the Leica M has taken over as the flagship, the M-E is being touted as their “entry-level” M-series camera. Of course, according to the Leica rep we talked to, it will still cost $4,800 Euros.

When you pick the camera up, it feels like an M-series Leica. Heavy, but extremely solid and evenly-weighted. The new flat grey top piece on the body is beautiful, too, but I still prefer the all-black look.

Inside, the M-E is all-but identical to the older M9, using the same CCD sensor and everything. They’ve removed the switch from the front, though, and have also gotten rid of the USB port, which likely didn’t get much use in the first place.

The real star of the Leica booth is what many people were expecting to be called the M10. The body shape here is actually a little different and easier to hold than the previous versions because of a slight, raised thumb grip near the control wheel. It doesn’t seem like much, after a long day of shooting, I’m willing to bet it would make a difference in comfort. The buttons to the left of the LCD are also rectangular instead of round, which gives the whole thing a decidedly more modern look.

There’s also an extra button on the back which activates the live view, something no M-series has ever done. The prospect of shooting video with a Leica M is a bit of a strange one and has already garnered enthusiastic reactions from fans online, ranging from very excited to extremely angry. The new talent is a function of the new 24-megapixel CMOS sensor found inside.

Their focusing system seems to work very well for video, especially with the focus preview function in action. Though, the total lack of image stabilization in the lenses and the bodies will make shooting video from the hip a bit of a trick. They’re also starting from scratch as far as third party video accessories, which makes adapting those Leica lenses to other more common bodies still seem pretty attractive.

The LCD on the back of the camera is high-res and very pretty under the Gorilla Glass cover, but the actual Liveview performance is a bit laggy. That’s not totally unexpected, though, as Leica has had that problem before with the X1. It’s surely not a dealbreaker, but it’s worth noting. I didn’t get to try the optional EVF, but if I was going to spring for an M body, I’d almost certainly get the EFV to go with it.

Ultimately, the M delivers pretty much exactly what everyone should’ve been expecting. It will still likely cost around $7,000 when it hits the market in the States, making it the same prices of the old M9. I’m curious to see how the image quality — specifically the color accuracy — has improved, though.

For most of us, the thought of owning a medium-format S is outside the realm of possibility, but it’s an awful lot of fun to work with when you get the chance. It’s built like a tank, but the DSLR-like shape makes it easy to hold.

I got to try out the 24mm lens, which plays much wider on a big sensor. The AF isn’t crazy fast (though, in all fairness, it was dark in there) and the lens makes a fair bit of noise as it focuses, but for a camera like this, neither of those are a big deal. Reviewing the images, though, revealed that they’re insanely sharp and distortion at the corners, though present, wasn’t bad.

Overall, it’s an insanely satisfying camera to use. The shutter sound hits you in the center of your body a lot like hitting a good golf shot or killing all the pigs on your first try on Angry Birds. It feels emphatic and substantial. Sadly, just not quite as substantial as the price.