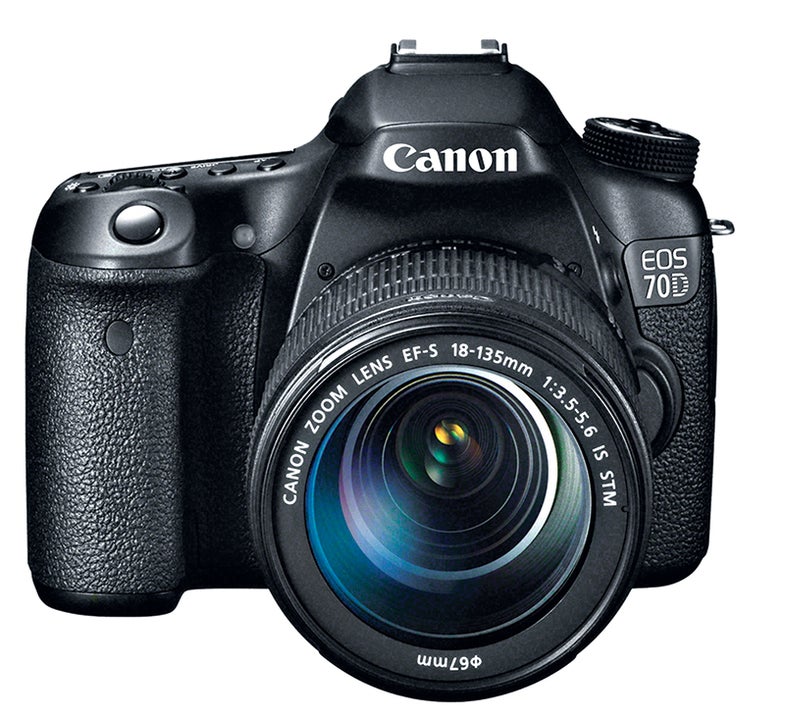 Since its inception with the EOS 10D in 2003, Canon’s double-digit-D line of APS-C-format DSLRs for advanced shooters has offered some of the best bang for the buck. Its latest, the Canon EOS 70D ($1,199 street, body only), debuts one of the most innovative approaches to imaging-sensor based autofocus we’ve seen, Dual Pixel CMOS AF.

In addition to this new technology, the Canon EOS 70D boasts bursts of 7 frames per second for up to 65 JPEGs (or 16 RAW images); a 19-point, all-cross-type, conventional phase-detection AF system that works in tandem with the 63-zone metering sensor for predictive focus tracking; and an articulating, 3-inch, 1.04 million-dot LCD. This monitor comes in mighty handy when capturing video, which tops out at 1920x1080p30 footage in Canon’s usual H.264 codec. And the 70D also gets a boost in pixels, to 20.2MP from 18MP in the 60D.

In the Test Lab
Even though the Canon EOS 70D has about two million more pixels than the 60D, their image quality results in our lab testing ended up quite similar. The Canon EOS 70D earned an Excellent resolution rating with 2630 lines per picture height at ISO 100, very close to the 60D’s Excellent 2600 lines. Color accuracy also rated Excellent, this time with an average Delta E of 7.3, versus the 60D’s 6.8. Noise was a bit lower at most ISOs—but at ISO 800, it underperformed just enough to dip to Moderately Low, which limits the Canon EOS 70D’s Excellent overall image quality rating to ISO 400 and below.

This might boil down to Canon trying to suppress noise in the Canon EOS 70D. After all, it scored 3.6 at ISO 12,800, while the 60D scored 4.7. And except for a tie at ISO 6400, where both cameras hit 3.4, and the 60D advantage at ISO 800, the new camera produced less noise at all of their shared ISOs. We’re talking very small differences here. It’s debatable whether many people would see a real difference between the images these two cameras produce at most ISOs, especially when printed at less than 100-percent magnification.

In autofocus, the Canon EOS 70D proved equal to or marginally faster than the 60D at most of the light levels in our test. Both focus extremely fast, even down to the equivalent of a moonlit field. At the brightest light in our test, the Canon EOS 70D focused in 0.34 sec and not until EV 2 did it top half a second. AF didn’t break a second until the light fell well below of the level at which Canon rates the system to work, EV –0.5. We got consistent enough results to report them below this: At EV –1 it still took less than a second and at EV –2, while less consistent, it averaged 1.21 sec.

In the Field
The Canon EOS 70D stays true to Canon’s long-successful design for this camera line. A beefy grip, long enough to fit all your fingers and angled slightly toward your palm on the side nearest the lens, feels very secure when shooting or holding the camera down by your side. Four tiny buttons between the LCD info panel and the command wheel on top provide direct access to AF, drive mode, ISO, and metering. They have such short travel that it can be hard to tell by feel if you’ve pressed one. We liked the raised dot on the ISO button, since we often wanted to change ISO without taking our eye off the optical finder.

As is the case in most recent Canons, the Q button gives access to a control-panel-style menu from which you can check or change the most important settings. If you don’t find what you want there, you can delve into the well-organized and very extensive menus. The traditional phase-detection AF did a fine job of tracking subjects in AI Servo mode. But the big news here is the Canon EOS 70D’s untraditional phase-detection AF, called Dual Pixel CMOS AF. At the bottom of each of the image sensor’s pixel wells are a pair of photodiodes. During autofocusing, each measures the phase of incoming light; the camera then compares these to determine how far to move the focusing group in the lens to quickly and decisively get the image sharp. During capture, the two pixels work together to form one image pixel.

A side effect of this new AF method is that, since it’s based on what the imaging sensor sees when wide open, its accuracy decreases with lenses of smaller maximum apertures. In other words, with a lens of very wide maximum aperture, such as f/1.4 or f/1.2, sharp focus will be visible to the sensor only within a narrow depth of field; an f/4 lens, on the other hand, will allow for an acceptable sharpness zone of greater depth—and therefore less precision. Canon says it works with maximum apertures down to f/11, but we didn’t have a lens with an aperture small enough to confirm this.

The new AF system does not prioritize speed, but it does achieve focus in about a second when moving from infinity to closest focus, or vice versa. The action is smooth and sure compared with many contrast-detection systems, which move quickly toward the focusing point, then typically waver around it before settling in.

When shooting video, such wavering can create a herky-jerky look. In our field testing, the Canon EOS 70D’s video footage looked sharp, and shifts in focus were very pleasing.

The built-in Wi-Fi proved helpful for video, since it lets you start and stop recording without having to touch the camera. This made the most difference when using the Canon EOS 70D on a Steadicam Merlin 2, which holds it very steady as long as you don’t touch it. Using a Samsung Galaxy S3 smartphone to control the camera, we were able to shoot smooth, sharp video that would be the envy of all the parents you know. Plus, with face detection engaged and continuous AF turned on, the Canon EOS 70D will lock onto your kid’s face and track along without your intervention.

The Bottom Line
The Canon EOS 70D marks a big achievement for Canon when it comes to live-view shooting and video capture. If you don’t commonly engage in these, there’s not much here that would make a 60D user want to upgrade, especially with image quality at essentially the same level. If you aren’t heavily invested in Canon glass, you may want to take a look at the Nikon D7100. In our test, it showed an appreciable amount of extra resolving power over the Canon EOS 70D, with noise at a Low or better rating through ISO 1600. Its AF for still-image capture isn’t quite as fast as the Canon EOS 70D, but should be good enough for all except those who should really be using a more expensive body. If you’re planning to shoot video or track subjects for a burst, though, we can’t understate how helpful Canon’s new Dual Pixel CMOS AF is when shooting moving subjects—which is, after all, what most people are going to do with a camera such as this. As an all-around imaging machine, the Canon EOS 70D is top-notch, for its price.