A new sensor and a wireless connection for Sony's popular ILC 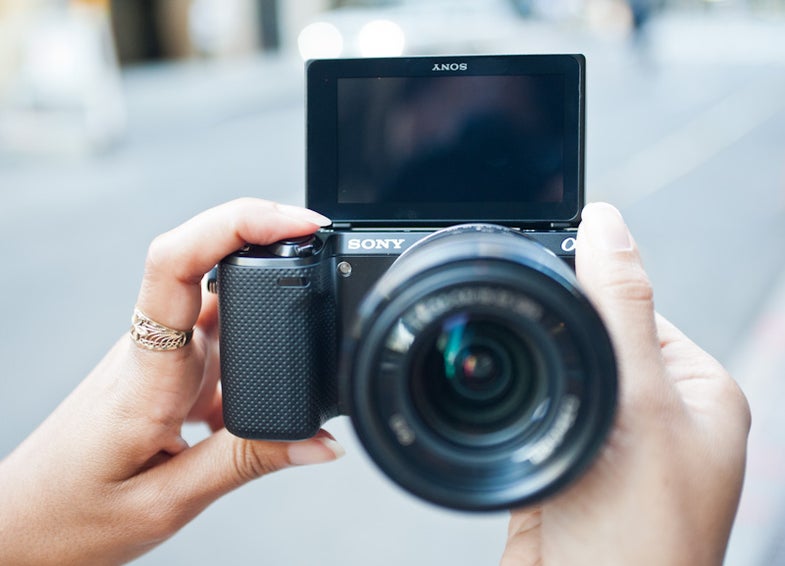 The pre-Photokina new camera blitz continues today with Sony’s new NEX-5R interchangeable-lens compact. The name might not sound like much of an upgrade, but there are some substantial differences from its predecessor, the NEX-5N.

The biggest new change from a photographic standpoint is the 16.1-megapixel sensor. It maintains the APS-C size, but they have now added 99 phase-detection AF sensors, giving it the ability to use both phase detection and contrast AF, similar to the Nikon 1-series and the Canon EOS-M and Rebel T4i cameras. Set to Speed Priority Continuous mode, it’s capable of maintaining AF tracking up to 10 FPS, which continues Sony’s emphasis on sheer shooting speed.

The other gorilla on the spec sheet is the addition of WiFi and Sony’s new PlayMemories platform. It doesn’t run a full mobile OS like Nikon’s Android-sporting S800c, but it does support additional PlayMemories apps that let you add functionalities to the camera. For instance, you can beam photos to an iOS or Android device over WiFi or even directly upload photos to Facebook. Other apps include things like additional picture effects, bracketing options, and, in the future, time-lapse. No, there’s no mention of Instagram.

The camera body has a few new additions, including a programmable control dial and a function button. The touchscreen display also now flips up 180-degrees to be front-facing like that on the entry-level NEX-F3 so you can take self-portraits for later Facebook attention grabbing. Also pulled from the F3 are the Auto Portrait Framing mode, which triest to crop your images according to photographic rules and the Clear Image Zoom which doubles the focal length of an attached lens without mangling image quality like typical digital zoom would.

Finally, they’ve also added the coveted 1080p video capture at 60 fps, which is something action video shooters are always very happy to have. It’s not surprising to see, though, since Sony was even able to cram that into their RX100 advanced compact.

The NEX-5R is scheduled to start shipping in October for $750 bundled with the 18-55mm kit zoom lens or $650 on its own. That will put it very much in competition with the upcoming Canon EOS-M, which has many similarities, at least on paper. Go little cameras, go.