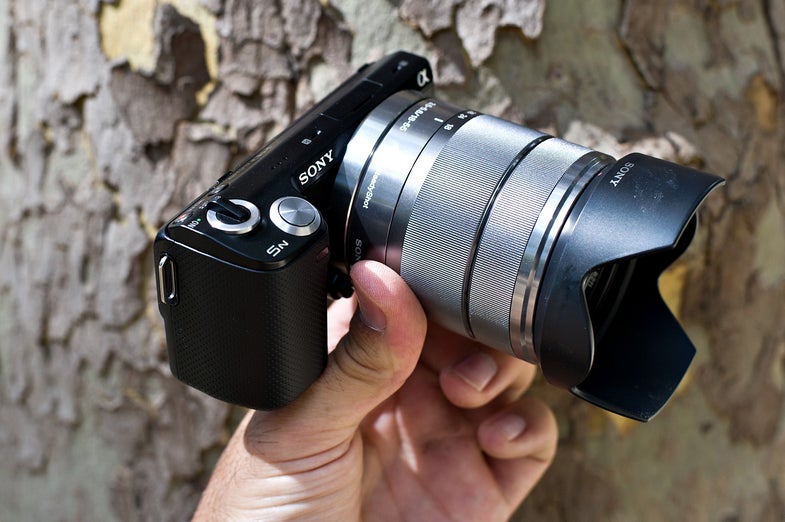 While the new NEX-7 has more in common with Sony’s new DSLRs than the rest of their ILC line, the NEX-5N should seem a lot more familiar.

Sony’s emphasis on speed remains a constant, bumping the NEX-5N’s shutter lag time to just 20 milliseconds, a number that matches that of the NEX-7. The new AF algorithm also speeds things up in the focus department, offering what Sony calls a “significant’ improvement over the NEX-5.

The guts consist of the 16.1-megapixel version of the Exmor APS HD CMOS sensor and a specially designed version of their BIONZ processor designed to maximize performance in the 5N.

The ISO caps off at 25,600, which is as high as it gets when it comes to ILCs right now and can grab up to 10 FPS in speed priority mode. The Picture Effects selection mimics that of the NEX-C3 and the 3-inch LCD display tilts 80-degrees up or 45-degrees down. Unlike the NEX-7, the LCD is touch sensitive, which handles navigation through Sony’s new Photo Creativity Touch interface.

If you’ve been keeping up with today’s Sony announcements, the video specs should be starting to sound very familiar by now. They include full HD video capture up to 60 FPS, continuous focus, which can be activated by the touchscreen, and a full set of manual controls.

One major advantage the NEX-7 has over the NEX-5N is the built-in OLED Tru-Finder viewfinder. You can add it using the FDA-EV1S OLED adapter starting November, but it’ll cost you an extra $350.

The camera itself will come as part of a kit with the 18-55mm zoom lens for $700 or body-only for $600. That means if you’re willing to give up the swanky, built-in viewfinder and some resolution (among other things) you can snag it for half the price of the NEX-7.

This whole ILC scene is getting extremely interesting.