Sony's NEX line gets a make-over at the entry-level 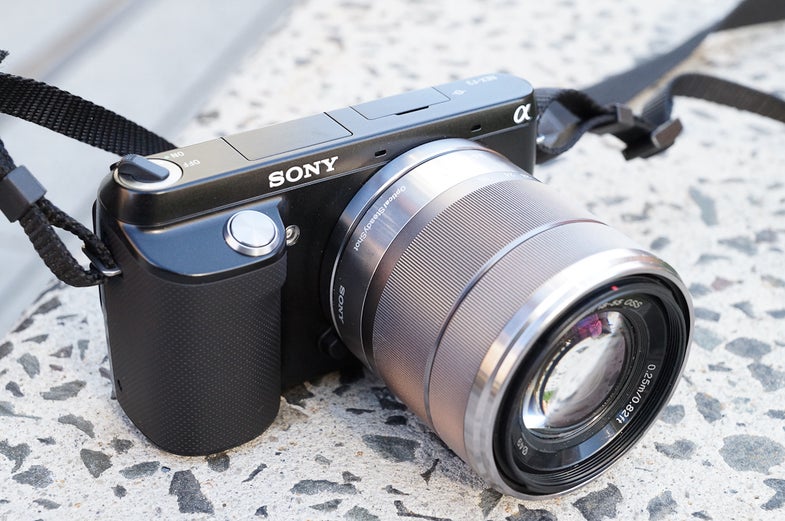 The NEX-C3 has been around for a while and now Sony has readied the follow up in the NEX-F3. I actually got to do some shooting with a pre-production model. You can check out the images in the gallery to see how it fared. Keep reading for a rundown of the new features.

From a purely image performance standpoint, the F3 has a lot in common with the C3 that came before it. It uses a familiar 16.1-megapixel resolution on an Exmor APS-C HD CMOS sensor that can capture 1080 video at 60i or 24p.

One of the handiest new features is the addition of a tilting LCD screen, something the NEX line has never had before. You can tilt the screen all the way up the actual display faces forward. When you do, the image flips so you can properly and easily compose a self-portrait without doing the awkward dance that comes with trying to figure out which way to move the camera.

Another feature that’s very welcome at this level is a pop-up flash. it’s extremely similar to the one you’ll find on the NEX-7. it won’t be overpowering bright sunlight, but it works nicely for little bits of fill flash or when you just want to add a catch light to someone’s eye.

The Clear Image Zoom is, in a way, like a beefed up digital zoom, which sounds scary, but when shooting with it, I actually found that it came in handy from time to time, especially with the kit lens. There is a little bit of quality loss, but if you’re going to be displaying images online, it seems like it might do a better job than doing a severe crop in post.

The new Auto Portrait Framing mode is an interesting concept. It identifies the people in your image and then crops the image so it obeys some common photography guidelines like the rule of thirds. We didn’t play with it much, but the results were definitely mixed. Sometimes it would do just fine. Other times, it would cut way too close. Ultimately, it seemed like it did a much better job with bad pictures than it did with OK ones, which I guess is the point. The cropped image’s resolution is then boosted using the same Pixel Super Resolution tech employed by the Clear Image Zoom.

Finally, the battery performance gets an almost 20-percent bump from the C3, giving it a total run of about 470 frames before you’ll need more juice. When I was out shooting, I actually found that I got more than that in JPEG mode.