Webb shows off what its calibrated equipment is capable of. But you'll have to wait until next week for the first full-color photo. 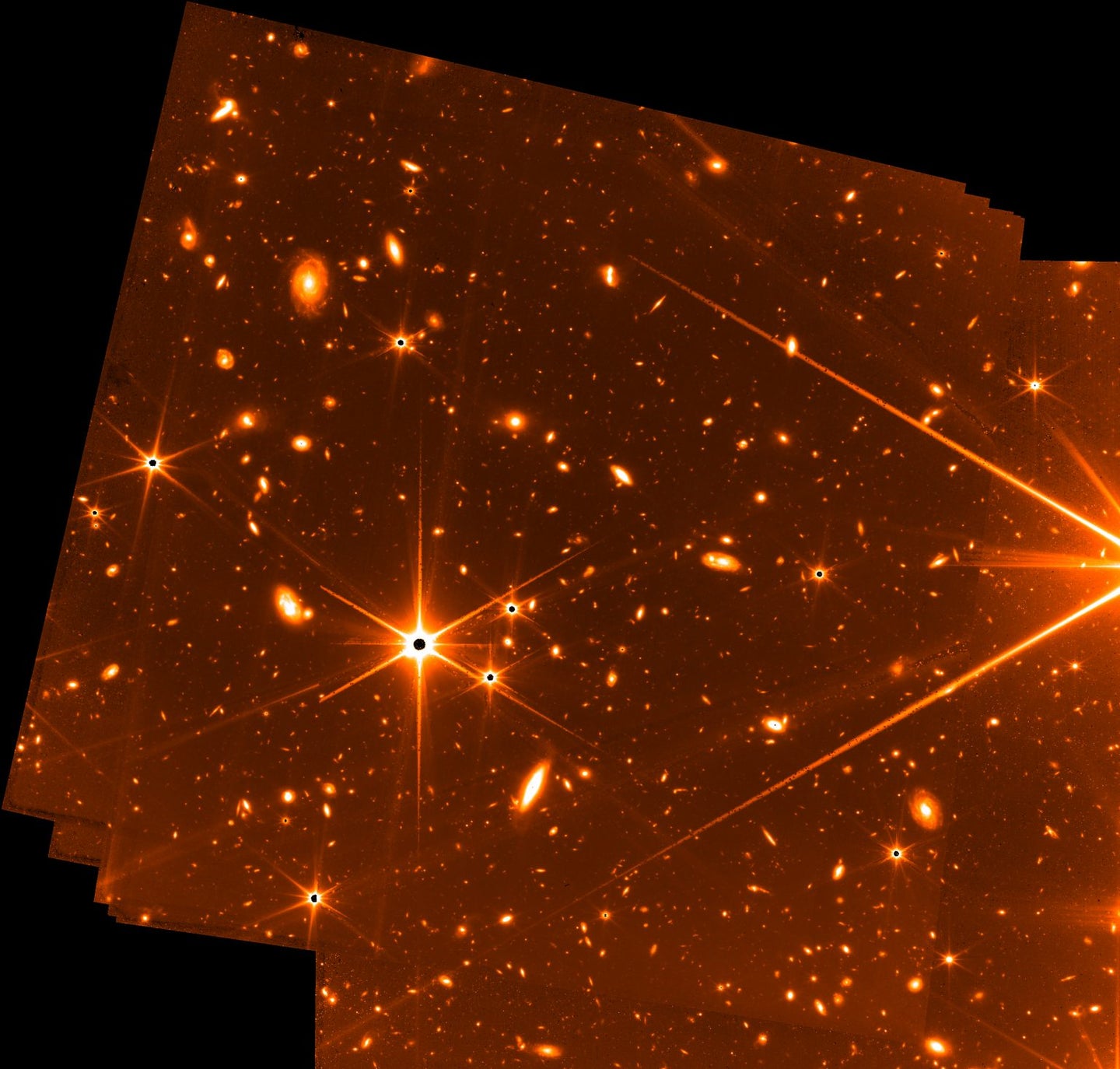 This Fine Guidance Sensor test image was acquired in parallel with NIRCam imaging of the star HD147980 over a period of eight days at the beginning of May. This engineering image represents a total of 32 hours of exposure time at several overlapping pointings of the Guider 2 channel. The observations were not optimized for detection of faint objects, but nevertheless the image captures extremely faint objects and is, for now, the deepest image of the infrared sky. The unfiltered wavelength response of the guider, from 0.6 to 5 micrometers, helps provide this extreme sensitivity. The image is mono-chromatic and is displayed in false color with white-yellow-orange-red representing the progression from brightest to dimmest. The bright star (at 9.3 magnitude) on the right hand edge is 2MASS 16235798+2826079. There are only a handful of stars in this image – distinguished by their diffraction spikes. The rest of the objects are thousands of faint galaxies, some in the nearby universe, but many, many more in the distant universe. NASA, CSA, and FGS team
SHARE

The first scientific full-color photos from NASA’s James Webb Space Telescope (JWST), the successor to Hubble, are due to be released on July 12. But, to get everyone excited, NASA has just dropped an incredible shot of deep space, captured by Webb’s Fine Guidance Sensor (FGS), incidentally, during other testing. According to NASA, it is, at least for a few more days, the deepest image of the universe ever captured and “provides a tantalizing glimpse at what the telescope’s science instruments will reveal in the coming weeks, months, and years.”

Related: One of the Webb telescope’s first missions will scope out two hot exoplanets

The funny thing about the FGS is that it isn’t even a camera—it’s a guidance system designed to help the JWST’s other instruments lock on to distant stars and galaxies. While it’s always been capable of capturing images, they have typically been thrown out because the JWST has limited bandwidth to work with. Since it can only transfer data from two instruments at a time, it’s generally had much more important photos—like the occasional selfie—to send back to NASA.

However, during a week-long stability test in May, the team realized there was enough spare data bandwidth to send the imagery from the FGS back to Earth. It uses the same telescope as the other instruments, so it’s a nice little sneak peek at the stars.

A glimpse of what’s to come

NASA itself calls the “engineering test image” a bit “rough-around-the-edges.” It was taken over eight days and uses 72 overlaid exposures totaling over 32 hours of exposure time. (You can see some of the overlap around the edges of the image.)

The centers of the stars are also blown out because they are bright enough to saturate the JWST’s detectors. NASA has strategies to handle this when it’s making scientific measurements but didn’t use any of them for this test.

Other than the handful of stars—which appear with six “diffraction spikes” because of the JWST’s six-sided mirrors—everything else in the shot is a distant galaxy. As Jane Rigby, Webb’s operations scientist at Goddard Space Flight Center explains, “The faintest blobs in this image are exactly the types of faint galaxies that Webb will study in its first year of science operations.” The more powerful instruments onboard will be able to reveal a lot more from similar photos.

The image is also in false color. It was monochromatic, but it has been given a white-yellow-orange-red gradient to represent the progression from the brightest to dimmest objects.

What to expect next week

The JWST is now focused and gazing out at the universe. The first “real science observations” were made in June, and we can expect to see those images very soon. They will be in full color and show us views we’ve never seen before.

Full scientific operations will begin in mid-July and that’s when things will get really exciting. According to NASA, JWST will make “breathtaking discoveries about stars, exoplanets, galaxies, and even moving targets within our solar system.” After everything Hubble has discovered over the last 30 years, it’s got a lot to live up to.