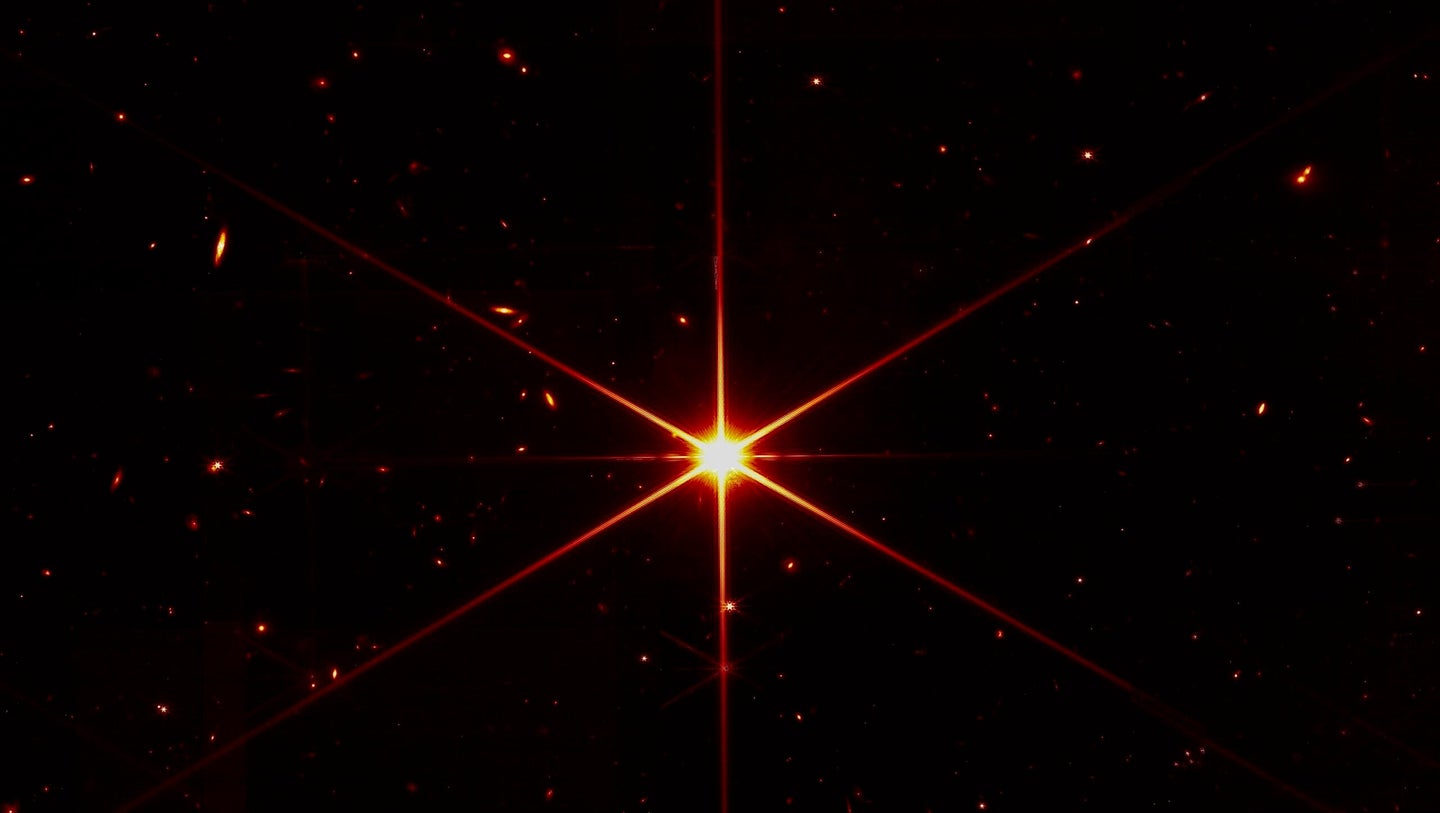 A bright star, with galaxies behind it, captured by the James Webb Space Telescope. NASA/STScI
SHARE

The James Webb Space Telescope’s main mirror segments are fully aligned, and now this NASA telescope is able to produce the highest resolution infrared images ever taken from space.

NASA released the first picture from the fully aligned telescope on Wednesday, showing the star 2MASS J17554042+6551277. Though other telescopes have previously photographed the star, the James Webb Space Telescope captured it with higher resolution. The telescope also detected other stars and galaxies in the background. These are called “deep field” images.

“This is going to be the future from now on,” said Jane Rigby, Webb operations project scientist at the NASA Goddard Space Flight Center in Maryland, according to Space.com. “Wherever we look, it’s a deep field. Without even really breaking a sweat, we’re seeing back in time to galaxies that we’re seeing the light as it looked billions of years ago.”

It’s a feat that would be impossible had the space telescope’s 18 mirror segments not been aligned precisely. Those 18 hexagonal segments make up Webb’s 21.3-foot-wide primary mirror. These hexagons had to travel to space folded—the mirror could only be unfolded after the telescope reached its targeted Lagrange point, 930,000 miles from Earth. There, it unfurled its sun shield and other components.

Aligning Webb’s many mirror segments was no small task, especially in the extreme conditions of space.  This was achieved by finely controlling multiple motors behind each segment. It was a crucial phase and a big milestone, allowing NASA to produce images with unprecedented clarity, as it did this week.

Related: How to ‘focus’ a six-ton space telescope

“We have exceeded every expectation,” Scott Acton, Webb’s lead wavefront sensing and control scientist, said in a video on the telescope’s official YouTube channel. “The telescope has performed better than the models said it should.”

The $10 billion James Webb Space Telescope mission is the most complex and expensive observatory of its kind ever launched into space. It has been decades in the making, and so these advancements have been highly anticipated.

“More than 20 years ago, the Webb team set out to build the most powerful telescope that anyone has ever put in space and came up with an audacious optical design to meet demanding science goals,” Thomas Zurbuchen, NASA’s associate administrator of science, said in a statement. “Today we can say that design is going to deliver.”

There are still a few alignment steps to go for the optical telescope, and then the team will prep the science instruments on Webb. NASA says Webb’s first full-resolution imagery and science data will be released in the summer. Once all of its instruments are fully operational, the James Webb Space Telescope should help astronomers unravel some of the universe’s biggest mysteries.

“Of all the sleepless nights I’ve had and the worries that I’ve had, they are all behind us now,” said Zurbuchen, according to Space.com. “There’s still a mountain to climb, those important tasks that need to be done. But we are way up that mountain.”