Hubble photographs the largest comet ever observed, and it’s headed this way 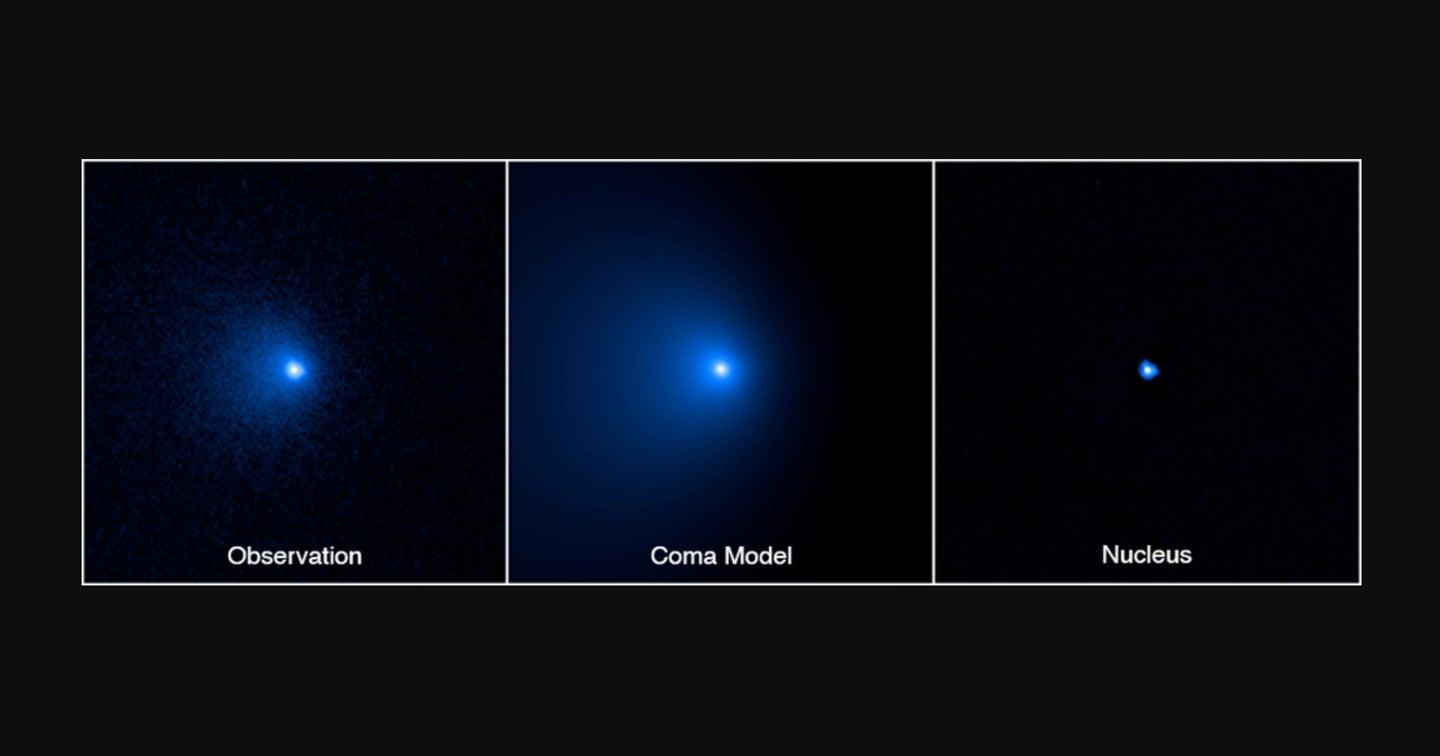 This sequence shows how the nucleus of Comet C/2014 UN271 (Bernardinelli-Bernstein) was isolated from a vast shell of dust and gas surrounding the solid icy nucleus. On the left is a photo of the comet taken by the NASA Hubble Space Telescope's Wide Field Camera 3 on January 8, 2022. A model of the coma (middle panel) was obtained by means of fitting the surface brightness profile assembled from the observed image on the left. This allowed for the coma to be subtracted, unveiling the point-like glow from the nucleus. Combined with radio telescope data, astronomers arrived at a precise measurement of the nucleus size. NASA, ESA, Man-To Hui (Macau University of Science and Technology), David Jewitt (UCLA); Image processing: Alyssa Pagan (STScI)
SHARE

While the James Webb Space Telescope (JWST) might be getting a lot of the headlines, Hubble is far from done with its scientific mission. Hot on the heels of photographing the most distant star we’ve seen, just last week NASA astronomers announced Hubble had spotted the largest comet ever observed—and it’s coming right this way!

But don’t panic, it won’t reach any closer than Saturn’s orbit.

Despite having been in orbit since 1990, Hubble is continuing to make incredible scientific discoveries. As much as astronomers might love a bigger telescope (hey, everyone suffers from Gear Acquisition Syndrome), it shows that one of the big limits in astronomy isn’t the quality of our equipment, but just how much cool stuff is competing for attention and funding.

Hubble’s latest record-breaker is comet C/2014 UN271 (Bernardinelli-Bernstein). At an estimated 80 miles across with a mass of 500 trillion tons, it’s about 50 times larger and 100,000 times more massive than a typical comet. (The previous record-holder, C/2002 VQ94, was a comparatively paltry 60 miles across, while Halley’s comet is just 7 miles across.)

C/2014 UN271 is currently “barrelling in” (that’s official NASA lingo) from the edge of the solar system at 22,000 miles per hour, though, according to NASA, the closest it will get is 1 billion miles from the Sun in 2031. That’s slightly farther out than Saturn’s orbit.

Comet C/2014 UN271 was first spotted (by astronomers Pedro Bernardinelli and Gary Bernstein, hence the name) in 2010 when it was still 3 billion miles from the Sun. From planetary perspectives, that’s roughly the average orbital distance of Neptune, although C/2014 UN271 is orbiting the Sun perpendicular to the plane of the solar system. “We’ve always suspected this comet had to be big because it is so bright at such a large distance,” says David Jewitt, a professor of planetary science and astronomy at the University of California, Los Angeles (UCLA).

To confirm their hypothesis, astronomers, led by Man-To Hui from the Macau University of Science and Technology, Taipa, took five photos of the comet with Hubble on January 8, 2022. It’s now just under 2 billion miles from the Sun, though at that distance, its nucleus—the solid icy bit at its center—is still impossible for Hubble’s instruments to directly resolve from the coma—the huge gas and dust trail surrounding it.

So Hui’s team had to use a few tricks. They made a computer model of the coma surrounding the nucleus, then adjusted it so it matched the images from Hubble. Then they used the computer model to subtract the glow of the coma leaving behind “the starlike nucleus.” From this, they could estimate the size and mass of C/2014 UN271.

While C/2014 UN271 is the biggest comet yet found, it’s unlikely to be the biggest one out there. Astronomers suspect that it originates in the Oort Cloud, a “hypothesized nesting ground of trillions of comets” that’s inner edge starts 2,000 to 5,000 times further from the Sun than the Earth. It’s so far out that NASA’s Voyager spacecraft probably won’t reach it for another 300 years.

The Oort Cloud is still considered a theory (or, really, a hypothesis) because the countless comets that could reside there are too distant and faint to be directly resolved. All we have is circumstantial evidence from comets like C/2014 UN271, and theoretical models of the birth of the solar system that suggest the material that makes up the Oort Cloud was “tossed out of the solar system billions of years ago by a gravitational ‘pinball game’ among the massive outer planets, when the orbits of Jupiter and Saturn were still evolving”.