Get the NEX-7's top features at a lower price 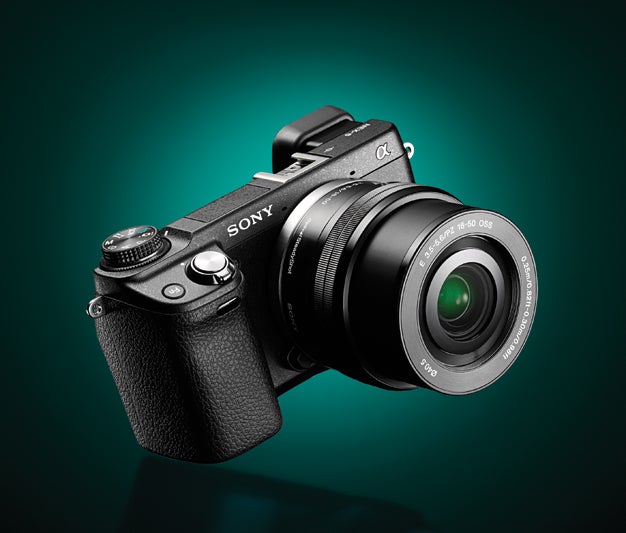 What do you do when your award-winning interchangeable-lens compact camera has too many fans that can’t afford to buy it? If you were Sony, you’d take most of what everyone loves about the Alpha NEX-7 and put it into a body that’s a better fit for their wallets—the NEX-6 ($848, street, body only; $998 with 16–50mm f/3.5–5.6 lens).

The new model has a very similar body design, the same lovely OLED electronic view-finder as its pricier sibling, and the same change-on-the-fly soft-key interface common to all of Sony’s E-mount ILCs. It also uses Sony’s new more-standard Multi Interface Shoe in place of the NEX-7’s legacy Minolta hot-shoe.

What’s missing? The NEX-6 dials down the pixel count—to 16.1MP from 24.3MP on the NEX-7—and eliminates the third command dial. As you might guess, fewer pixels mean that the NEX-6 loses the resolution battle to the NEX-7, but it also brings better noise performance.

In the Test Lab
Since Sony doesn’t yet produce a real E-mount equivalent to the 50mm f/1.4 that we typically use as a test lens, we continue to test its NEX cameras with their respective kit lenses. In this case, that’s the 16–50mm f/3.5–5.6 OSS retractable zoom. We set the lens to 35mm (approximately a 52mm full-frame equivalent) and then captured our test images at f/8 as we always do. Under those conditions, the NEX-6 earned a Very High rating in overall image quality from ISO 100 through ISO 3200. At lower ISOs, resolution was the limiting factor, while noise became the limit at higher ISOs.

Although it came quite close to our lower cutoff of 2250 lines per picture height for an Extremely High rating, the NEX-6’s resolution of 2225 lines at ISO 100 managed only a Very High rating. It held on to enough res to remain Very High up to ISO 12,800 with 2000 lines, the bottom edge of that rating.

To compare, Panasonic’s Lumix GX1 with its kit lens served up 2530 lines at ISO 100 and 2180 lines at ISO 12,800. But the GX1’s images were also significantly noisier at its software’s default noise-reduction settings. We suspect that if you applied enough noise reduction to get the GX1 to match the NEX-6’s noise results at ISO 12,800, then the Panasonic would fall behind the Sony in resolution.

A similar scenario plays out with Fujifilm’s X-Pro 1, though this model showed better noise control than the Panasonic and would give the Sony stronger competition at ISO 12,800. The Fujifilm is significantly more expensive, though, and targets a different kind of photographer.

In our color accuracy test, the NEX-6 barely earned an Excellent rating with an average Delta E of 7.9. By comparison, the Panasonic GX1 turned in an impressive 5.8, while the Fujifilm X-Pro1 was one of the rare cameras to receive the one-notch-lower Extremely High rating, with a Delta E of 9.3.

When we factor noise into our overall image quality rating, we look for the span of ISOs for which the noise rating is Low or better. The NEX-6 meets this criterion from ISO 100 through ISO 3200. However, it’s worth noting that up to ISO 1600, the NEX-6 showed Very Low or Extremely Low ratings. This is outstanding for an ILC and it even beats such DSLRs as Canon’s EOS Rebel T4i and EOS-1D X, as well as Nikon’s D4.

In the Field
Even a camera overflowing with noise-free resolving power would be worthless if you couldn’t control it properly. Ergonomics and controls are where the NEX-6 really showed its value.

Despite its small size, the camera has a pleasing grip: While not tall enough to accommodate your little finger (unless you have tiny hands), it nonetheless feels secure when you hold it. We also appreciate the space-saving strategy of placing the mode dial atop the command dial. The latter is easy enough to turn that you’re not likely to accidentally change modes when you meant only to, say, stop down the aperture.

Given that the NEX-7 lets you use three different command wheels independently, we were a little perplexed that the NEX-6 won’t let you assign a function to the wheel on the back of the camera when you are not in manual exposure mode. In that mode, the rear wheel controls shutter speed, but in aperture-priority mode, it controls nothing at all. Why can’t we program it to adjust exposure compensation or ISO? These each are quickly accessible via the shortcuts on the four-way controller, yes, but having exposure compensation at the ready on a command wheel can be a great boon to shooting in autoexposure modes. (Note to Sony: Please consider a firmware update to remedy this.)

In addition to the usual cool Sony features, such as Sweep Panorama (for automatic stitching), Handheld Twilight (for low-noise low-light shots), and Auto HDR, the NEX-6 adds built-in Wi-Fi as well as the same focus-peaking found in the Alpha 99 (see our description of that in the test here) for easier manual focusing.

You can pair the NEX-6 with your iPhone or Android device via a download of Sony’s PlayMemories Mobile app, which allows you to simply and easily transfer images from the camera to your phone for upload to your favorite image-sharing website or app. Once set up, the process becomes pleasingly seamless. On one occasion, we were able to share an image immediately after it was shot, and we already had a request for a print by the time we got home. This helped us prioritize our RAW conversions.

As is typically the case in ILCs of late, the NEX-6 focuses quickly in bright light and slows down noticeably in dimmer scenarios. Switching from the kit lens to Sony’s fancy (and pricey) 24mm f/1.8 sped things up, thanks to the extra light hitting the sensor. The autofocus system did a reasonable job of keeping up with moving subjects once it achieved its initial lock.

Video shot with the NEX-6 compares favorably with footage captured with other APS-C-format mirrorless cameras—there’s plenty of detail and pleasingly saturated colors. Plus, the AVCHD files should be fairly easy to work with in most video-editing software.

The Bottom Line
The ILC market continues to evolve rapidly, and the NEX-6 fills a spot that Sony hadn’t yet addressed. Considering how many photographers we’ve encountered who have described the NEX-7 as being just a little too expensive for them, we’d expect that a fair number of avid shooters will be won over by this model. Sony’s line of lenses still doesn’t match the selection you can get in the Micro Four Thirds format, but recent additions have been promising.

If you are looking for an ILC as a second camera, the fact that the NEX-6 doesn’t have as much resolving power as some models shouldn’t be much of an issue. If it’s to be your main camera, then you’ll have to decide whether the resolution it delivers is enough for you. For most people, the NEX-6’s resolution will indeed be enough, especially for casual, everyday shooting. Even with modest cropping of images from the camera, you can produce very nice prints at 13×19-inches or even greater enlargement—bigger than most non-pros will ever print. And if you don’t plan to print at all, the NEX-6 makes a wonderful companion to your cell phone. But be forewarned: some of your Facebook friends may want you to shoot their weddings and parties after they see what you can capture with this camera.