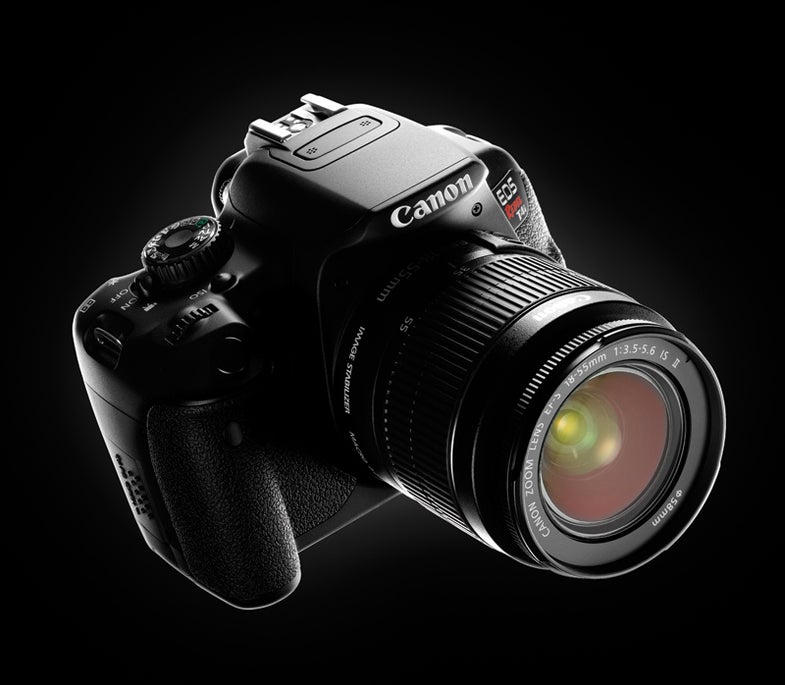 Nearly every year, we have a cover declaring the best Rebel ever. Even though we didn’t do that this year, it would’ve been true if we had; Canon always manages to make improvements in its Rebel line.

With the EOS Rebel T4i ($849, body only), improvements include a new hybrid autofocus system that embeds phase-detection points on the CMOS imaging sensor, much like Nikon’s System 1 cameras. The new AF system works only with Canon’s new STM lenses that use stepping motors to move the elements inside the lens to achieve focus. When using such a lens, you gain reasonably fast continuous autofocus during live view or video shooting. While this system can’t match the speed of continuous focusing you can get with Sony’s transmissive mirror system found in that company’s DSLRs, it is a very big step in the right direction for Canon. At the same time, Canon also managed to improve the T4i’s noise handling over its predecessor.

In the Test Lab
Though the EOS Rebel T4i’s overall Image Quality rating of Excellent from ISO 100 through ISO 400 matches that of the T3i, don’t let that fool you. The T4i managed to keep noise at a Low or better rating a full two stops higher on the sensitivity scale than its predecessor. With nearly identical results in color accuracy and resolution, that’s a pretty impressive achievement.

Noise suppression is probably the T4i’s biggest strength in terms of imaging performance. Noise remains at a Low or better rating from the lowest sensitivty setting of ISO 100 through the camera’s sensitivity halfway point of ISO 1600. It doesn’t reach an Unacceptable noise rating until its highest sensitivity of ISO 25,600.

Since Canon applies increasing amounts of noise reduction as the ISO increases, there’s not much more room to bring noise down further at ISO 25,600. Depending on the image content, it might not be possible to bring it down to a noise level we’d rate as acceptable, but given our strict standards, some people may find some images shot with the T4i at ISO 25,600 usable, especially at magnifactions lower than 100 percent.

In our color accuracy test, the T4i walked away with an Excellent rating thanks to an average Delta E of 6.5. That’s well below our cutoff of 8 for this lower-is-better test.

Our autofocus test showed that the T4i’s regular phase-detection AF functions on par with what one can expect from an entry level DSLR. In very bright light it proved fast, focusing in 0.33 second in the brightest (12 EV) portion of our test. That’s not the fastest DSLR we’ve seen, but it’s still impressive. More impressive was that the T4i could focus in about 1.28 seconds at the dimmest light level (–2 EV) in our test. Some low-cost DSLRs won’t even focus in such dim light.

The new hybrid AF system works in tandem with the standard phase-detection AF. When the mirror is flipped up for live view or video capture, the camera switches to the hybrid system. That uses both contrast detection and the special phase-detection points embedded in the CMOS sensor. These latter points let the camera see the distance to the subject in a way that the contrast-detection system can’t. The phase-detection points let the camera get very close to perfect focus, then the contrast detection brings it the rest of the way. In our experience with the new 40mm STM lens, the hybrid system provided much faster focusing than Canon’s previous attempts at contrast detection in DSLRs. But it wasn’t quick enough to keep up with faster-moving subjects during video or still capture. The standard phase-detection system had no trouble keeping up with triatholon runners and other faster-moving subjects.{C}{C}

In the Field
Given the vast similarity to the body design of the T3i, it is enough to say that the T4i is equally impressive and just as much a pleasure to use. Many settings have dedicated buttons, and those that don’t are easily changed via the quick menu.

Video shooters will appreciate that the camera now has a built-in stereo microphone as well as a stereo minijack input for an external mic. Furthermore, video footage was on par with the very pleasing footage we have come to expect from DSLRs.

Sports shooters will appreciate the increase in burst rate to a solid 5 fps in the T4i—generally our minimum threshold for sports shooting—from the T3i’s 3.7 fps. Sadly for RAW shooters, the buffer can hold up to only 6 RAW shots or 3 RAW+JPEG shots per burst. So if you’re planning to shoot continuously, it’s best to use a UHS-I-compatible card and capture up to 30 JPEGs per burst. If your card is not UHS-I-compatible, then you can expect up to only 22 JPEGs per burst.

The Bottom Line
Canon continues to make the top of its Rebel line just what it needs to be. As video has been the main theme in DSLRs this year, the new, more robust AF system is a welcome addition, as is the stereo microphone.

At the same time, Canon has maintained the AF performance we’ve come to enjoy up to this point. It’s also kept the resolution and color accuracy on par with, or above, previous Rebels. The resolution doesn’t keep up with Nikon’s 24MP class-leading D3200 and we wouldn’t expect it to. But the T4i’s resolving power is more than enough for still shooters in this range. Furthermore, the D3200 focuses slower and reaches Unacceptbale noise levels by ISO 3200—that’s two stops in Canon’s favor.

Both Canon and Nikon have more lenses and accessories available in their systems, and through third parties, than any ILC system can offer at this point. For high-level, low-cost shooting, the Rebel line still offers some of the best bets in imaging, and the T4i tops that list.