A new Lumix proves to be a small wonder 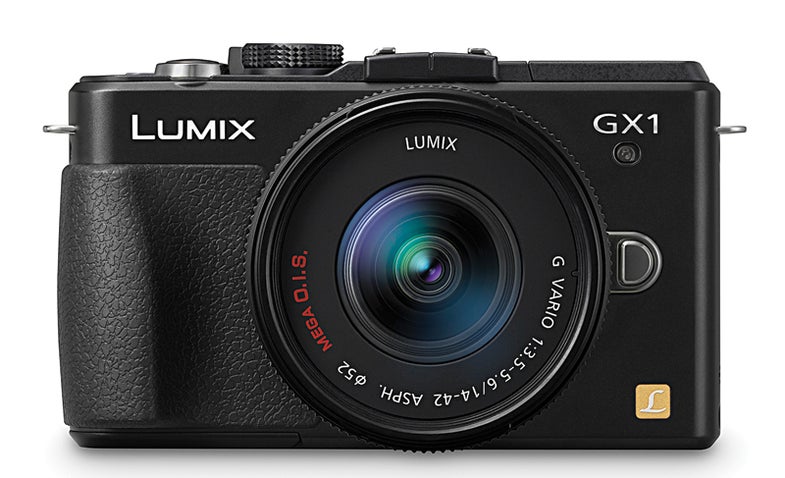 The X-series kit lens that we used during our testing impressed us with its smooth and controlled-speed power zoom action. Panasonic also offers a 45–175mm f/4.0–5.6 for video-graphers who need more reach.
SHARE

When we first saw Panasonic’s Lumix DMC-GX1 ($800, street, with standard kit lens; $950 with X-series power-zoom kit lens) we finally forgave the company’s designers for aiming the GF line at the snapshooter crowd.

The new GX1 turns out to be what we had expected of the GF3—a small, but not absurdly tiny, camera body with a built-in flash, 16MP sensor, hot-shoe that accepts an accessory electronic viewfinder, and Panasonic’s lovely touch controls backed up by plenty of real buttons. The best part of all? It delivered delicious results in the Popular Photography Test Lab.

In the Lab
With just enough resolution (2530 lines per picture height) to achieve top honors in this measure, plus remarkably accurate color recreation and well-controlled noise at lower ISOs, the GX1 earned an Excellent rating in overall image quality from its lowest sensitivity of ISO 160 through ISO 400.

Though it is considerably behind Sony’s NEX-7 in resolving power, the GX1 delivers proportionally more resolution from its 16MP Micro Four Thirds sensor than the Sony delivers from its considerably larger APS-C-sized sensor.

And while the GX1’s resolution fell just below the cutoff for an Excellent rating by ISO 800, with 2480 lines, it held onto an impressive amount of resolving power even at its top two sensitivities of ISO 6400 and ISO 12,800, where it turned in 2320 and 2180 lines, respectively.

In our color accuracy test, the GX1 passed with flying colors, turning in an average Delta E of 5.8—well below the cutoff of 8 for Excellent (lower numbers here mean higher accuracy).

Whenever we discuss noise in tests of Panasonic’s cameras, we must mention that the version of Silkypix RAW conversion software that ships with the camera doesn’t adjust noise reduction proportionally to ISO setting. This means that the results we attain with our standard test procedures look worse than what you can achieve with this camera.

It also means that if you want to shoot RAW, you’ll have to start from scratch when determining the amount of noise reduction to apply. Other manufacturers, notably Canon and Nikon, provide noise-reduction defaults in their RAW software that let you see how much reduction they recommend at a given ISO, making it easier to decide.

Even with inadequate amounts of reduction, the GX1 keeps noise to a Low or better rating up to ISO 400, and it doesn’t reach Unacceptable until ISO 1600.

JPEGs are another story, as the camera will apply more aggressive noise reduction than the RAW conversion software. When we tested JPEGs captured simultaneously with the RAW files used for this test, noise remained consistently lower, staying in Acceptable territory through ISO 1600. Of course, this came at the expense of resolution, which was about 100 fewer lines in JPEGs up to ISO 800, falling to almost 200 lines fewer at ISO 12,800.

In the Field
Of course, a camera is more than a bundle of imaging components; it is a tool, and the way it handles counts. Panasonic delivers here as well. From its superbly designed grip—among the best so far on an interchangeable-lens compact—to its control system and speedy contrast-detection autofocus, the Lumix GX1 is a delight to use.

As we’ve noted before, Pana-sonic’s touchscreen controls are a great supplement to the hard-button controls built into the top and back of the camera. Two of the hard buttons and two soft buttons in the touch interface can be assigned to control any of 25 different functions. Although we were surprised that the GX1 didn’t let us also assign a different function to the video recording button (which can be turned off, in case you’re worried about pressing it inadvertantly), we certainly can’t complain about the level of customization in this ILC.

Panasonic offers the GX1 in a kit with the new X-series power-zoom version of its 14–42mm f/3.5–5.6 kit lens that should appeal to shooters who expect to do a lot of video capture. (The camera is also available body-only and with the standard kit zoom offered with other Lumix bodies.)

The X-series lenses use rocker switches on the left side of the lens barrel to control zoom and manual focus. The idea is to mimic the way video shooters control camcorders, while providing smooth zooming and a consistent zoom speed (which can be set to three different levels). Still photographers, however, might find even the fastest zoom speed a bit slow in certain situations. If you mainly shoot stills, you should probably get the standard kit lens.

But for video capture, the X-series lens prevented zooming and focusing noise from ruining the sound recorded by the GX1’s built-in stereo microphone. For nonprofessional work, video shooters should be plenty pleased with the results.

The Bottom Line
If you’re looking for a rangefinder-style ILC, the Lumix GX1 is an excellent choice. It easily outresolves Olympus’s Pen E-P3, and serves up more accurate colors. Novice RAW shooters might prefer the noise-reduction guidance Olympus provides with its defaults, but JPEG shooters will see very similar noise results from the two cameras.

Given that we named Sony’s NEX-7 our Camera of the Year for 2011, it should come as no surprise that it trumps both the GX1 and E-P3. But the Sony also costs hundreds of dollars more than these Micro Four Thirds models. Furthermore, even though Sony’s E-mount lens selection is growing admirably, we were quite impressed with the new X-series lens, which compliments a selection of glass that covers almost anything you’d want or need. If we had to choose an ILC to buy right now, the GX1 would be on our short list.