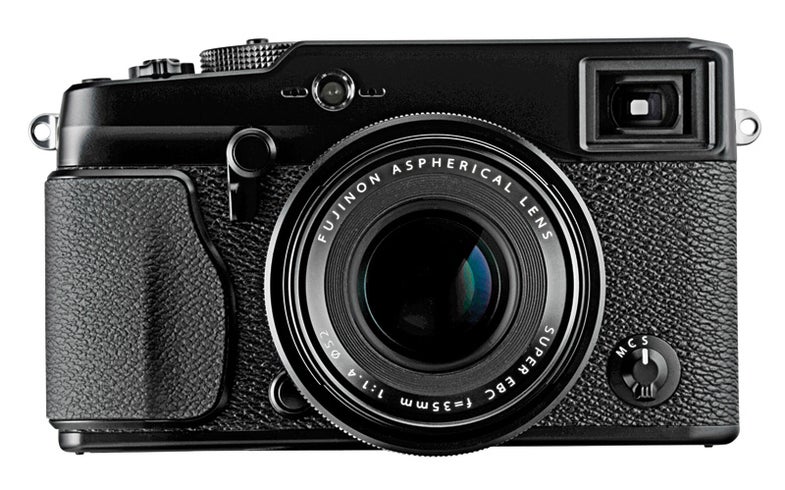 If there were a Drool Index for cameras, the Fujifilm X-Pro1 ($1,699, street, body only) would have been atop the list since its announcement back in January. Here was a new interchangeable-lens compact (ILC) that looked remarkably like an M-series Leica, right down to the bright-frame viewfinder. That it came from Fujifilm, whose discontinued S-series DSLRs still enjoy cult status, was icing on the cake. Now we can finally see if the craving was warranted.

In the Test Lab
The big news is the X-Pro1’s 16.3MP X-Trans sensor, which eschews the Bayer array of pixels—used in nearly all DSLR sensors—in favor of what Fujifilm calls a “more randomized” pattern. It has 36 pixels in a square before repeating the pattern; a typical Bayer sensor has 4 pixels in each repeating square.

Fujifilm claims this design eliminates the need for the low-pass filter that’s sandwiched with most Bayer-array sensors to prevent moiré patterns in image detail (see page 38). With no low-pass filter, the reasoning goes, the X-Trans chip can deliver more resolution. In our lab tests, the X-Pro1 did prove a sharp imager, delivering an average of 2400 lines per picture height for an Extremely High rating. But this falls short of other ILCs with similar pixel counts. The 16MP sensor in both the Panasonic Lumix GX1 and G3, for example, scored over 2500 lines for Excellent ratings—using Four Thirds sensors with physically smaller dimensions than the X-Pro1’s APS-C-sized X-Trans sensor.

But there is more going on here. Our resolution numbers are the average of horizontal, vertical, and diagonal line readings. The X-Pro1’s horizontal and vertical results ran a little over 2200 lines, while the diagonals scored much higher—2800 and 2400. So there is room for refinement in this sensor.

In color accuracy, it scored an Extremely High rating with an average Delta E of 9.3. While good, it’s no great shakes these days, when even point-and-shoots routinely hit the Excellent mark.

The X-Pro1 kept noise within acceptable limits up to ISO 6400, where it slid into Unacceptable range. Applying a little more noise reduction in the Silkypix RAW converter bundled with the camera brings this to acceptable levels; the camera holds onto resolution up the ISO scale. It got an impressive 2310 lines at ISO 6400, and at its top ISO of 25,600, it gets 2200.

Overall image quality ended up Very High at ISO 100 to 200. (With a slightly better color accuracy score, under 8.0, it would’ve won a solid Extremely High rating.)

In the Field
The X-Pro1 body has surprising heft, and its dimensions stretch the definition of the term “compact,” which makes handling comfortable and secure.

The exposure-compensation dial and frequently-used back buttons are within easy thumb reach. The single command wheel is nearly superfluous; among its few functions are option selection in the quick menu and scrolling through pictures in playback. Exposure controls are logical. Set either the shutter-speed dial or the lens aperture ring to A, and you get priority autoexposure for whatever you’ve set on the other control. Set both to A, and you get program AE, shiftable with a left or right press on the four-way controller on the back. Take both off A, and you can set exposure manually; the exposure scale is visible in the optical and electronic viewfinder.

You read that right: The X-Pro1’s viewfinder can switch between a traditional bright-frame optical finder (with superimposed readouts) and an EVF. A 1.44-million-dot LCD, this is so fine-grained and lifelike that several of our editors at first didn’t believe it was an EVF.

Unlike the OLED finder in Sony’s NEX-7, however, this EVF doesn’t redraw very quickly. During a fast pan, the finder image judders, and during a burst, it freezes. Use the optical finder in these situations, or when capturing the fleeting expressions of a child or pet.

We also like the optical finder for an old rangefinder trick: You can see what’s outside the bright frame, letting you precisely time when something moves into it. It also changes magnification when you switch lenses. (So far, lenses are limited to three fast primes: 18mm, 35mm, and 60mm macro.)

Autofocus speed is midpack by ILC standards—slower than a typical DSLR, yet not sluggish. It tends to hunt, particularly when moving from far to near subjects or vice versa. You can engage an AF assist lamp, which will dazzle (or annoy) portrait subjects. In bright light, continuous AF tracked moving subjects pretty well, but in video mode it was dicey.

Manual focusing was less than satisfying. While the lenses’ electronic focusing rings have lovely smoothness and damping, they have way too much travel from near to far focus.

With either viewfinder, an inward press on the command wheel enlarges the center portion of the frame to aid focusing. A scale readout below the frame shows distance as well as the zone of depth of field; we would happily trade this for focus confirmation.

Among the many shooting features are panorama mode (via a single slow pan), double exposure, photobook assist, and—truly useful—dynamic-range adjustment, which lets you expand the contrast range captured.

Operation is so straightforward that its few quirks stand out. Selecting viewfinder mode (you have five choices) can be a puzzle, involving both a selector button on the back and an unmarked lever on the front. And the camera captures only JPEGs (no RAW files) at ISO 100, 12,800, or 25,600.

The Bottom Line
The Fujifilm X-Pro1 will appeal chiefly to enthusiastic (and affluent) amateurs, as well as to pros seeking an alternative shooting experience—people for whom pride of ownership is a factor.

This may help mitigate its shortcomings: slower autofocus than a DSLR, clunky manual focusing more like a compact’s than a true rangefinder’s, and an EVF that can’t keep up with fast action. The limited lens selection is also a drawback, though Fujifilm will surely fill out the line.

The X-Pro1’s main rival is the Sony NEX-7, offering higher imaging performance for $500 less (body only) with a bigger lens line, a lighter and smaller body, and a more responsive EVF. Your choice may come down to control style: Fujifilm’s traditional dial-and-ring design versus Sony’s innovative triple command wheels.

The X-Pro1 is further evidence that the ILC concept is gaining critical mass. And it’s good to see Fujifilm once again making high-quality cameras with interchangeable optics.