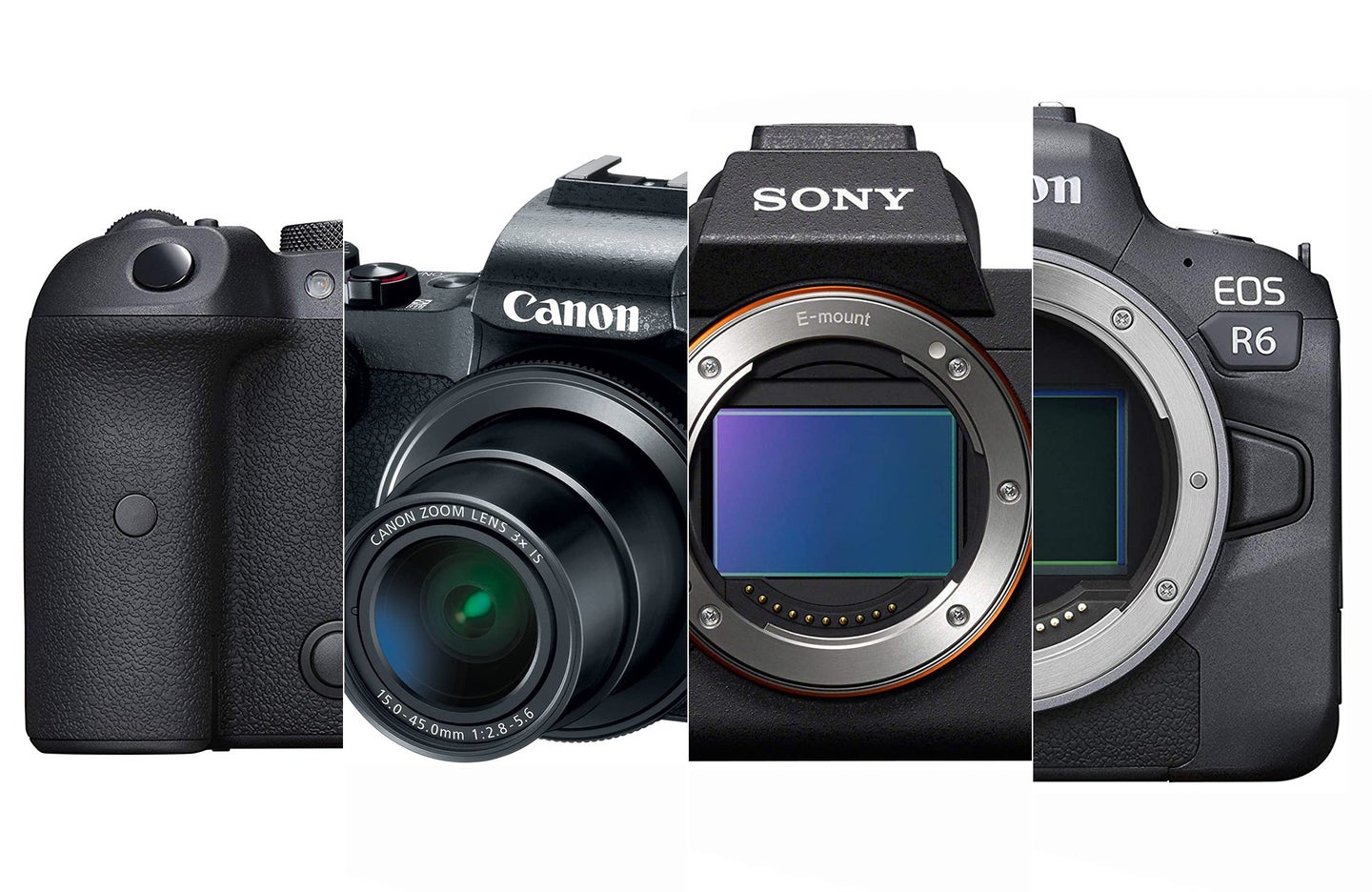 These are the best cameras for taking pictures or shooting videos in dark situations.

Shooting photos or videos in low-light situations only used to be possible if you owned a high-end professional camera with fast lenses. Luckily, over the last handful of years, as full-frame mirrorless cameras have become the norm and ISO ranges have greatly expanded, the low-light capabilities of smaller, more affordable camera bodies have also increased.

Generally speaking, for a camera to perform well in low-light shooting situations, it will need a large full-frame sensor, an extensive ISO range, and a quality autofocus system. While many of the higher-end low-light cameras in this guide feature full-frame sensors, there are other features to look out for that can make an APS-C sensor or a Micro Four Thirds sensor an acceptable choice for shooting in low-light conditions. Keep reading to learn more about the best low-light cameras for shooting late at night.

Things to consider before buying a low-light camera

The first thing you should ask yourself if you are in the market for a low-light camera is for what you will be using it. The specs that make a camera good for low-light video shooting versus low-light photography can be pretty different, so we’ve compiled our buying guide with these two different shooting scenarios in mind.

Generally speaking, you will want to look for a camera with a large sensor–ideally full-frame–because there is more surface area for light to be gathered on the frame. However, you don’t necessarily need something with a ton of megapixels. If you have no intentions of making huge prints, a large megapixel count won’t give you many advantages. For video shooters, a camera that has a 12 megapixel should be just fine. Photographers who don’t plan on printing large will likely prefer something in the 20 – 24 megapixel range.

Beyond sensor size, you will also want to keep your eyes out for a particular type of sensor. Backside-illuminated sensors (BSI), also referred to as back-illuminated sensors (BI), are excellent for low-light photography. BSI sensors essentially have the sensor components in reverse order, so more light can hit each pixel, an advantage for low-light photography.

A camera with a solid image stabilization system is another thing to look for when shopping for a low-light camera. Generally speaking, when you are shooting in near darkness, you are using a much slower shutter speed than if you were working in sunny daytime conditions. A camera with in-body image stabilization will allow you to shoot handheld photos without worrying about camera shake as much.

Although having a capable camera body is essential for low-light photography or videography, a low-light camera won’t do much good if you use it with a slow camera lens. For detachable lens cameras, consider pairing them with a fast aperture prime, something like f/1.4, so that you can get as much light hitting the sensor as possible.

When shopping for a low-light camera, the final thing to keep in mind is your budget. Camera bodies with large sensors will typically be much more expensive than an APS-C or Micro Four Thirds option, so be prepared for that.

Why It Made The Cut: The -6.5EV autofocus sensitivity and in-body stabilization of eight stops found in Canon EOS R6 and its relatively affordable price point make it the best low-light option for most photographers.

The Canon EOS R6 is one of the best low-light options currently on the market for photographers. Its 20 megapixel full-frame sensor paired with -6.5 EV AF sensitivity and eight stops of in-body stabilization make it an excellent tool for shooting in near darkness without a tripod. It also has an impressive ISO range of 100-102400 that expands to 50-204800.

The R6 has an ultra-high-resolution viewfinder and can shoot up to 20fps continuously. Although it can shoot 4K video, recording times can be unpredictable as the battery begins to drain, so we think this is a low-light camera best suited for still photography.

Why It Made The Cut: The Sony A7S III is an extremely powerful tool for low-light video shooters thanks to its excellent autofocus, in-body stabilization and 4K video capabilities.

Although it only has a 12 megapixel sensor, this camera became a fast favorite of run and gun videographers looking to shoot 4K video. It features 10-bit internal 4:2:2 recording and 16-bit RAW output to an external recorder and can shoot 4K video up to 120fps. It also utilizes Sony’s excellent autofocus system that can perform down to -6 EV, making it a great choice for videographers shooting late at night. Pair this with one of Sony’s excellent G-Master lenses, and you end up with an excellent tool for shooting video in dimly lit scenarios.

Why It Made The Cut: Although it has a modest megapixel count, the Panasonic GH5S has a 4K optimized sensor and dual native ISO, making it a good, lower-cost option for videographers shooting in low-light.

Although the GH5S has a modest 10 megapixel sensor, this older model remains one of the best Micro Four Thirds cameras for video shooters. The dual native ISO and the 4K optimized sensor make it a solid tool for shooting in low-light conditions of -5 EV. In addition, it has tons of customizable buttons and a responsive touchscreen for silently controlling the camera while you are rolling. The smaller sensor size found in the GH5S also means that this is a more affordable option than what you might find in a larger full-frame camera.

Why It Made The Cut: The Canon G1X Mark III has a large sensor crammed inside a compact body with a highly capable zoom lens, making it an excellent low-light option when you don’t want to haul a bunch of gear around.

This compact camera has an impressive 24 megapixel sensor and an extensive ISO range of 100-25600. The autofocus system is the same as those in much higher-end Canon cameras, making it easier to focus even in low-light situations. It also has a fully-articulating touchscreen, a bright OLED electronic viewfinder, and touchpad autofocus.

Unfortunately, the video quality caps out at 1080/60fps, so this camera won’t be the best option for you if high-quality video is your thing. Although it won’t provide the low-light quality of some of the other cameras on this list, it’s a great choice if you want something compact with more impressive specs than your smartphone.

Why It Made The Cut: Thanks to its optional light guides and flash diffuser accessories, this waterproof camera is one of the best options for low-light shooting underwater.

If you love to shoot underwater, you probably already know that the deeper you go, the less light you have to work with. The Olympus TG-6 is waterproof up 50 feet without waterproof housing and becomes waterproof up to 147 with that protective housing. Of course, you will lose a lot of light when you are that far underwater, but thankfully, this niche camera is up to the challenge. A bright LCD screen will help you compose underwater, while optional light guides and flash diffuser accessories will help you keep things nicely lit without disturbing the aquatic scenes below. It supports 4K video, can shoot RAW, and is an incredibly rugged option for shooting low-light images under the sea or in other wet conditions.

Q: What makes a camera good at low-light?

Generally speaking, a camera that is good for low-light shooting will have a large back-illuminated sensor and a high range of ISO sensitivity. Although these two things are crucial in determining how well a camera will perform in low lighting, the lens that you attach to the camera body will also play a role. If you are planning to shoot a lot of videos or photos in low-light, you will want to pair your camera with a fast aperture lens so that you can let as much light hit the sensor as possible.

Q: Are mirrorless or DSLR cameras better in low-light?

Q: How do I take sharp photos with low-light?

Having a camera with excellent autofocus capabilities and IBIS will help your images remain sharp even if you are shooting handheld at slow shutter speeds somewhere dimly lit. Look for cameras with AF sensitivity that can perform at least at  -5EV. You’ll also want a camera with good noise handling at higher ISO ranges, as too much noise reduction will reduce sharpness.

Q: Which ISO is best for low-light?

Knowing which ISO is best for low-light depends on your particular circumstances and exactly how much light is available. In general, cameras with a more extensive ISO range will generally operate better in dimly lit spaces, but that doesn’t necessarily mean you should be shooting at the highest ISO that your camera has. As you crank the ISO on your camera, the noise within your images will increase. Luckily, most modern cameras are good at reducing digital artifacts at ISOs as high as 10,000.

Q: Is APS-C good in low-light?

An APS-C sensor camera doesn’t have as large of a sensor as a full-frame camera, but it doesn’t mean that there aren’t decent options on the market for low light shooting. In most cases, an APS-C sensor camera will be a more affordable choice for getting the job done, so as long as it has a good ISO range and ideally in-body stabilization, it should work plenty well.

When selecting the best low-light camera in the guide, we considered how you might use them (photo vs. video work) and where you might use them. Although a camera that works well in low-light will typically be purchased by an advanced amateur or a professional, we thought it important to include a few cameras that would be considered more budget-friendly for shooters who are just getting started. The cameras we featured in this buying guide were selected through a mix of hands-on experience, user feedback, and editorial reviews.

Having the right gear for shooting in low-light situations will make a big difference in final image quality. We hope the products in this guide will help you make an informed decision in selecting the right camera for you. Video shooters and photographers have different needs for working in low-light, which is why we believe it’s one of the most important things to consider before purchasing a low-light camera.