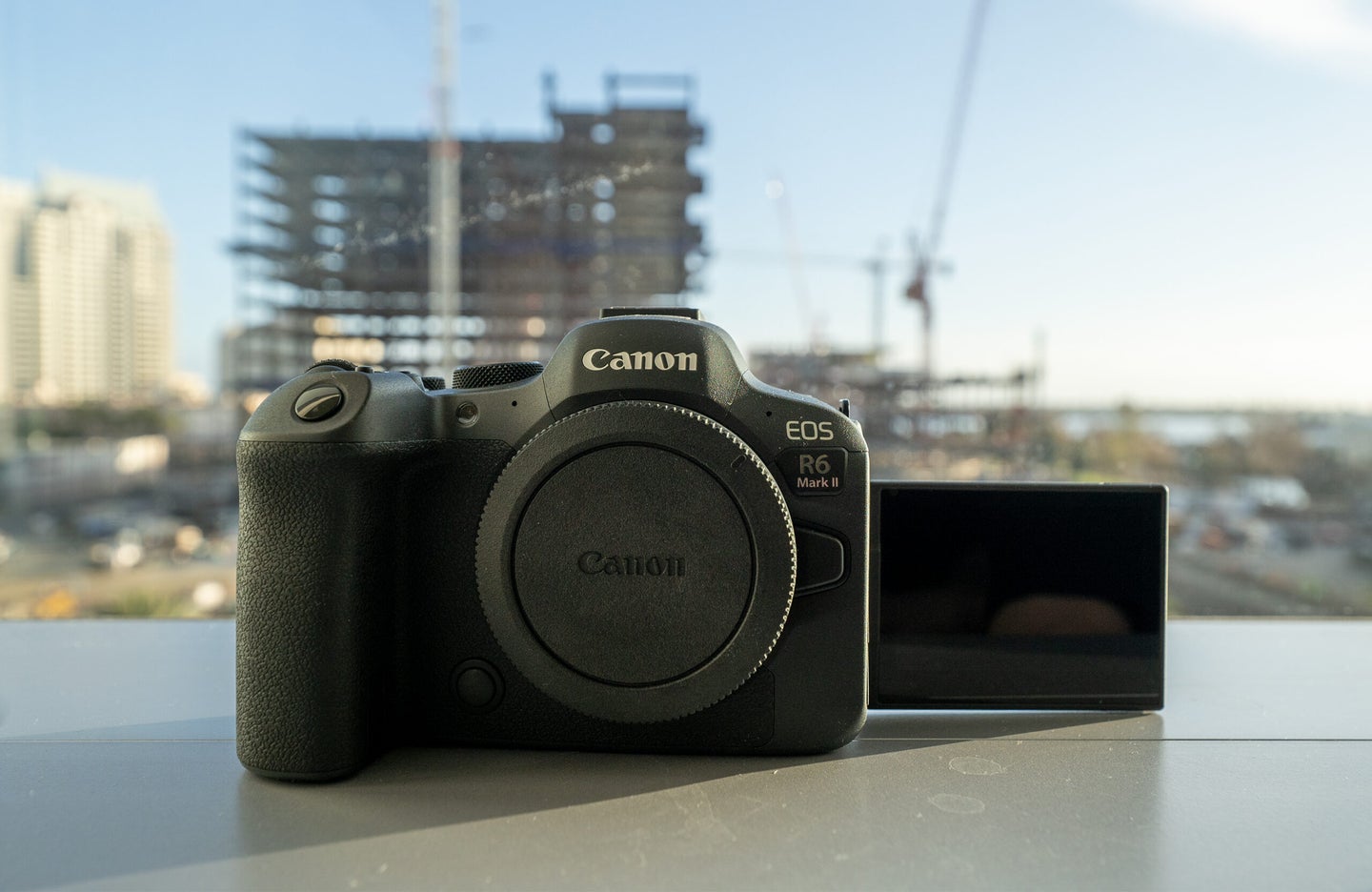 When Canon released the full-frame, mirrorless EOS R6 in 2020, it offered a well-rounded suite of features designed to fit just about any photo or video situation. Canon clearly aimed to continue the tradition with the R6 Mark II, offering specs ideal for photo and video shooters alike, such as 40 fps, 6K external recording, and outstanding autofocus.

PopPhoto recently had a chance to test a pre-production model of the camera during a press event in San Diego. We’ll publish a more complete review when we have more time to work with the camera, but here are some of our initial impressions after using the camera for roughly two full days of shooting around with the EOS R6 Mark II.

What is the EOS R6 Mark II?

The R6 Mark II is a full-frame, 24.2-megapixel mirrorless camera. Priced at $2,499 for the body only, it sits right in the middle of Canon’s full-frame mirrorless lineup. It features a brand new 24.2-megapixel CMOS sensor, though it isn’t back-side illuminated (BSI) or stacked like many other recent cameras. Presumably, this was to keep the price of the camera down, as it’s the same price as the original R6 when it was released in 2020 despite the Mark II’s upgrades as well as the current state of inflation.

Don’t let the traditional sensor fool you, though. It’s capable of 12 fps with the mechanical shutter and a whopping 40 fps with the electronic shutter, even with 12-bit raw files. Canon also says the R6 Mark II has a resolution performance that is superior to the EOS 5D Mark IV, which provides 30.4 megapixels.

If you’ve used the EOS R6, the Mark II will immediately feel familiar. The body itself hasn’t changed at all, keeping the same general ergonomics and size as the original version. The new power switch layout may throw you off, however, as it has moved to the opposite side. In its place is a switch to toggle between photo and video settings. This makes it much more straightforward to go back and forth between formats.

If you haven’t used an R6 before, know that the camera just feels good in your hand. I’m not typically a Canon user, but that was one of the first things that struck me about this camera. It feels natural and comfortable to hold, even for long periods. The grip is nice and deep, but it’s not so large that if you have smaller hands, it’s challenging to manage. Despite being a lightweight (1.5 pounds) mirrorless camera, it has a DSLR-like feel, which, call me old school, feels better in my hand.

Beyond the fast-burst shooting, the autofocus is the star of the show with this camera. It inherited the autofocus from the EOS R3, which is more than twice the price. Of course, the R6 Mark II won’t match the performance from the R3’s stacked sensor. But we love to see advanced systems and features trickle down the camera lineup. With the R6 II, Canon aims to make it easier to use the autofocus system, meaning less fiddling with settings, but also more reliable and accurate.

To aid in that goal, there are new tracking subjects: horses and planes. But perhaps most importantly, there is now an Auto Subject Tracking mode. This will automatically detect the subject—based on what’s near the center, larger in size, or was the subject in the previous frame—for the best autofocus results. It should do a great job of keeping you out of menus and instead able to focus on shooting.

We were primarily photographing humans the entire press trip, so I mostly kept the AF tracking mode on People or Auto. Overall, I was thoroughly impressed with the autofocus and its ability to track subjects as they moved through the frame. And Auto Subject Tracking did an excellent job of picking up what I had in mind as the subject of a shot, even when it wasn’t very obvious.

The camera did seem to struggle when there were obstacles (literally, in the case of the obstacle course) in the way or if the person was smaller in the frame. But when the person was very clearly the subject of the shot, the camera did an excellent job of focusing on and tracking them as they moved. That was even the case if they went behind something after the initial first shots.

One feature I really appreciated was the ability to adjust the sensitivity for switching between subjects when tracking. I tested this mostly when photographing tennis doubles. With the camera set to stay on the original subject, one player in the foreground was completely blocking the subject I had focused on. Despite this, the camera was able to successfully keep focus on the original subject. With the camera set to be more sensitive, it mostly reliably switched between subjects so I could get shots with each in focus. As with other advanced cameras in the Canon lineup, the AF features work best if you’re willing to put in a little work to understand the customization features.

One of the other key upgrades in the Mark II is the video specs and shift in features to focus on hybrid shooting. As mentioned, there is now a switch on the top left to quickly toggle between still and video shooting. Overheating was a common issue with the R6, but Canon says the R6 Mark II is capable of recording 4K60p for 40 minutes or more. That essentially means there is no longer a heat limitation. Instead, battery life and memory card space will be the limiting factors.

The R6 Mark II is capable of 6K 12-bit raw external recording, 4K60p full-width internal recording oversampled from 6K, or full HD at 150 fps. It also has the addition of Detect Only AF, which focuses on the subject, even if they come from or go behind something. It should make for smoother videos since the focus won’t shift around between the subject and other items in the frame, such as walls. I focused on still shooting during this press trip, so a more in-depth video review will happen down the line.

I was, admittedly, a bit surprised to see the sensor only jumped from 20MP in the R6 to 24.2MP in the R6 Mark II. But nevertheless, I was happy with the image quality, even in jpegs, and most people don’t need massive megapixel counts anyway. Although I did shoot raw for a substantial part of the trip, none of our preferred editing software can process those yet, so we will look at that more in-depth at a later date.

We shot in a lot of bright, high-contrast situations on this trip, resulting in some tricky images. I was able to bring a lot of detail back out of the highlights and shadows of the jpeg files. Even with really dark shadows, I didn’t have to deal with a substantial amount of noise as a result of lightening them up, which was good to see.

Low-light shooting was also a good experience. I took a few shots in my dark hotel room at ISO 10,000 and was quite surprised by how little noise there was. The noise was definitely there, and it wasn’t as sharp as lower ISOs, but I wouldn’t necessarily shy away from shooting that high, especially when shooting raw. The camera has in-body image stabilization (IBIS), and it is quite effective. I took a handheld image at 1/15 of a second, and it is totally sharp despite my very not stable hands.

The burst shooting rates were indeed fast, and a sequence of stills looks remarkably like a video clip. The camera also has pre-shooting for its Raw Burst Mode, which was hugely helpful when photographing tennis. I haven’t photographed fast action in quite a while, and my reaction time for the ideal moment of action was always just a hair behind when trying to do it on my own. With pre-shooting on, I was able to get the ideal timing most of the time. It will burn through the buffer, so for longer action that could be an issue, but for short bursts, it worked well.

Who should buy the R6 Mark II

The R6 Mark II is very much a hybrid camera. It has a well-rounded set of features and specs for high-quality stills and video. As is the trend, Canon has clearly geared things towards content creators, who will especially benefit from the feature set of this camera. There are even social media aspect ratio overlays to help compose material for those platforms in camera and a simplified Wi-Fi process for getting content to your phone faster.

As a mid-range mirrorless, it’s also the ideal DSLR upgrade for those who have been waiting to move to mirrorless. As should be evident by the types of scenarios Canon set up for us to shoot, the camera is excellent in sports scenarios thanks to the fast burst rates and responsive autofocus. The R6 Mark II can truly do a lot of things well, making it a good choice for a wide range of photographers and content creators, but especially those who dabble in a lot.