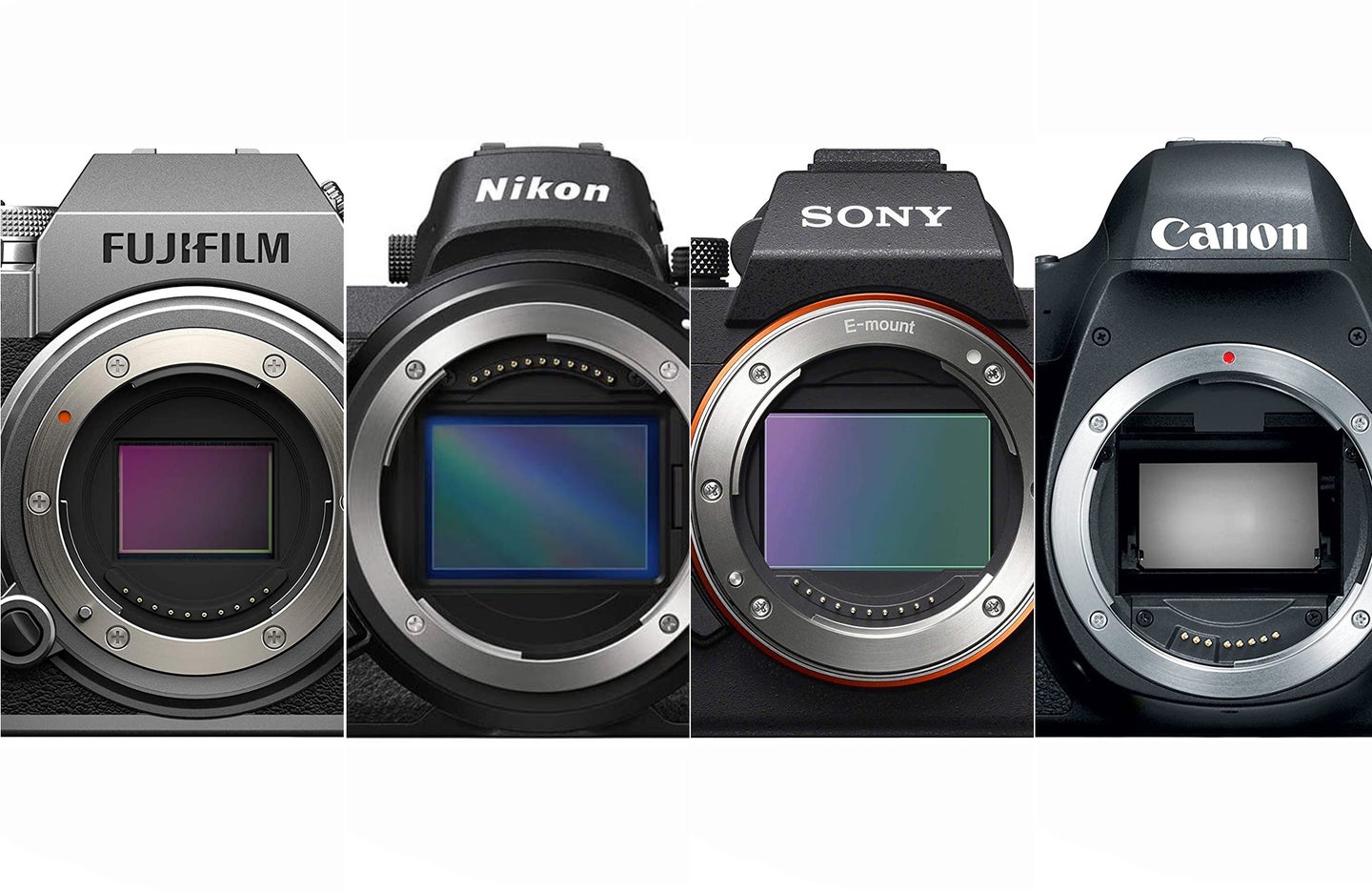 Best cameras for astrophotography in 2023

Capture stunning starscapes and beyond with one of the best cameras for astrophotography.

Astrophotography has rapidly become more popular among hobbyists and professionals alike. Aided by the recent lockdowns of the global pandemic, three visible near-earth comets, and the highly publicized achievements of NASA and the ESA, people have increasingly connected with the idea of photographing space. The best camera for astrophotography is one that allows the capture of detail-rich photos of the night sky while at the same time balancing noise and resolution.

Here are our picks for the best camera for astrophotography in 2023:

Things to consider before buying a camera for astrophotography

If your main goal is to take still photos at night, there are a lot of features on modern cameras that will be irrelevant for your pursuit. Marketing will hype up features related to autofocus, extreme ISO ranges, video capabilities, and in-body image stabilization (IBIS), but in practice, these features are inconsequential to astrophotography, so take them with a grain of salt.

Mirrorless cameras aren’t inherently better than DSLRs for astrophotography. More important to this debate is the actual lens mount on the camera you’re interested in. Sony, Nikon, and Canon have all switched their lens mount type to accommodate the new mirrorless technology. Unfortunately, this means that the newer Z and RF mounts have limited and pricier options than older legacy mounts. So a DSLR might be the better pick if you want a broader selection of potentially less expensive lenses.

Cameras that perform well for astrophotography can range from $500 to $3000. The main differences between cameras in this broad spectrum are going are photographer aid features, such as live view zooming, enhanced exposure, backlit buttons, etc. Yes, quality does get better the more money you throw down, but only incrementally. If your main focus is astrophotography, an increase in price doesn’t necessarily mean an increase in quality.

Why it made the cut: The Sony a7 III is the king of versatility with its low light performance, video capabilities, and advanced feature set.

Despite the a7 III not being the newest version (Sony introduced the a7 IVin late 2021), choosy consumers will still have a fantastic experience with this well-rounded mirrorless camera. For one, it will be easier to find stock of the a7 III (thanks to the pandemic). It’s also going to be much less expensive than the new model. And you won’t be missing much buying this older version, as many of the upgrades in the a7 IV wont help in astrophotography, and in the case of the megapixel jump, it might actually hurt it.

The a7 III is a versatile performer that can do it all. Its 24.2 megapixels might seem low for a full-frame camera, but that’s actually going to help it be highly competitive in low-light situations. This camera will exceed expectations in taking both stills and video when paired with a fast lens. Its high ISO performance means you can even capture usable video of the night sky. The a7 III is also very lightweight, meaning it will work just as well atop even the smallest star trackers or timelapse rotators. Couple that with its “Bright Monitoring” feature, which enhances the exposure in live view, and you’ll never again struggle to find compositions on a tracker or tripod.

Why it made the cut: The Nikon D850 is a professional workhorse with substantial resolution, sturdy construction, and access to the entire F-mount lens range.

The Nikon D850 might be the last great DSLR in production today, and it’s likely the end of a generation of large, substantially robust cameras. In an era where most modern prosumer cameras feel like toys, the D850 stands out as a tool for the most rugged and extreme adventures. Its 45.7 megapixels and lack of an anti-aliasing filter help it achieve details other cameras only dream about. But its largest advantage over the competition is the F-mount. The ability of the D850 to natively support the hundreds of legacy F-mount lenses might be a boon to those who want to offset the cost of this camera by getting some inexpensive glass.

Although high-resolution cameras tend to suffer in low light photography, especially in deep-sky astrophotography, the D850 holds its own inhigh dynamic range, low read noise, and shadow detail at higher ISOs. It also has some pretty nifty features that the competition is lacking. For example, none of the other cameras on this list have backlit buttons. In fact, not many cameras in existence have this feature, which is a big deal if you’re doing a lot of night photography. And then there’s battery life, which will never be an issue when owning the D850. The only real downside to this camera is its size and price. Some consumers may not be able to justify the high cost for a camera system that is conventionally obsolete.

Why it made the cut: The Nikon Z6 strikes a perfect balance between sensible cost, low light performance, and high-end features.

Less expensive than its replacement (Z6 II) and better performing than its big brother (Z7),the Z6 is a perfect choice for mirrorless astrophotography. The incremental changes between the Z6 and Z6 II are so minuscule as to wonder why Nikon bothered, especially considering that you can still buy the Z6 brand new. Those thinking that the 46 megapixels of the Z7 or Z7 II are enticing will have to pay nearly double for them, which shows what a bargain the Z6 is. You get a lot of camera for the money.

Nikon really struck gold with this camera. They included a large swath of features that are still impressive today. The viewfinder is ridiculously clear and bright, which is a huge plus as Nikons have traditionally offer a lackluster live view in the past. The top mount display is a welcome addition that makes seeing the settings at night a breeze. But what’s most impressive is that this camera packs a fantastic sensor with a very low noise profile thanks to the smaller megapixel count. It’s an achievement for Nikon to have their first Z mount camera (along with the Z7) still be relevant so many years after its debut.

Why it made the cut: The Fujifilm X-T4 is a reasonably priced, well-designed, and rugged camera. It has a large ISO range and a multi-angle screen, handy for astrophotography.

Fujifilm’s X-T4 is a great all-around camera and is an excellent choice for someone wanting to get started with astrophotography. The camera body is very lightweight–the lightest on this list–making it easy to pack in if you hike to your astrophotography destinations. It’s also a durable body, capable of handling temperatures as low as 14°F for those winter night shoots. Unfortunately, there is no top screen, meaning you have to use the viewfinder or rear screen to check settings, a downside when shooting low or trying to conserve battery.

The ISO range of the XT-4 goes up to 12,800 and can extend to 51,200, giving lots of flexibility for astrophotography. The noise levels are impressive, allowing you to take advantage of some of those higher ISOs without losing the stars to noise. In addition, the vari-angle screen makes it easier to compose your images when shooting at low angles. Though the camera is an APS-C sensor, it still puts out quality images at a reasonable price for beginners.

Why it made the cut: The Canon EOS 6D Mark II is an economical full-frame DSLR with great noise characteristics and the pedigree of being a top choice for industry professionals.

Although released five years ago, the Canon EOS 6D Mark II is still making waves in the photography community. The aspects that made the 6D Mark II an important camera back in 2017 are still relevant today. It’s still one of the smallest and lightest full-frame DSLRs available.. Thanks to the large full-frame sensor with fewer megapixels, it still has low read noise at higher ISOs, holding its own against cameras released today. To make matters more convincing, the EOS 6D Mark II still has access to the entirety of the EF-mount lens range, which should help significantly keep the costs down while keeping choices high.

If you want to save even more money without losing out on quality, you can find the original 6D used on sites like eBay. The older version is even better for astrophotography in some ways, so it is still an excellent choice. In fact, for the last three years (2019-2021), The Astronomy Photographer of the Year contest saw the Canon EOS 6D as the most popular camera. For those three years, 10% of all shortlisted images came from the EOS 6D.

Q: Are DSLRs good for astrophotography?

DSLRs are perfectly fine for astrophotography. It’s not the shutter, or lack thereof, that matters; it’s the sensor behind it that makes the difference. For now, DSLRs still have the same sensors and image processing chips as mirrorless cameras, so there’s no real difference in the results they produce. But, DSLRs are slowly becoming obsolete, meaning in a few years, the technological difference between them and mirrorless will be more significant.

Q: Is full-frame better for astrophotography?

If you plan on taking landscape astrophotography images, you will likely want a full-frame camera. The larger sensors in full-frame cameras generally perform much better than APS-C or Micro Four Thirds cameras, especially when they’re under 30 megapixels. This is because the individual pixels on the sensor are significantly larger and more efficient at collecting light and dispersing thermals, two key factors in helping increase the performance of a sensor.

Lensesspecificallyfor full frame cameras are also more efficient at gathering light toward that sensor. Wide and ultra-wide angle lenses for full-frame cameras generally deal with distortion and chromatic aberration significantly better than lenses designed for smaller sensors. Going with a full-frame camera and lenses comes at a cost, though, as making the jump to full-frame can be a significant investment.

How we picked the best camera for astrophotography

The primary concern is noise performance across the ISO band. Cameras with larger sensors overwhelmingly dominate this metric, as they tend to have larger individual pixels, which increases their efficiency at gathering light and dispersing thermals. We were also interested in finding cameras with a high dynamic range per ISO setting. With astrophotography, one is constantly pushing the ISO while trying to maintain detail in highlights and shadows. So having a high dynamic range at higher ISOs is paramount. Price was a huge factor as well; we chose older cameras simply because their newer replacements were too similar in feature sets and low light performance to warrant the added expense.

Final thoughts about the best camera for astrophotography

Astrophotography is still a niche pursuit. Picking the right camera for this niche is a delicate balance of selecting individual features and low-light performance versus price. Don’t automatically assume that the newest camera is the best choice for astrophotography. The newest features on the latest camera models don’t always improve their functionality and usability as it pertains to astrophotography, and you could end up paying more for features that won’t apply to this genre. The choices above reflect these concerns. After all, the camera is only one part of the equation; if you’re economical with your decision you should have savings to apply to better quality glass.