Nikon's latest mirrorless camera is an affordable, APS-C model, built with vloggers and streamers in mind. 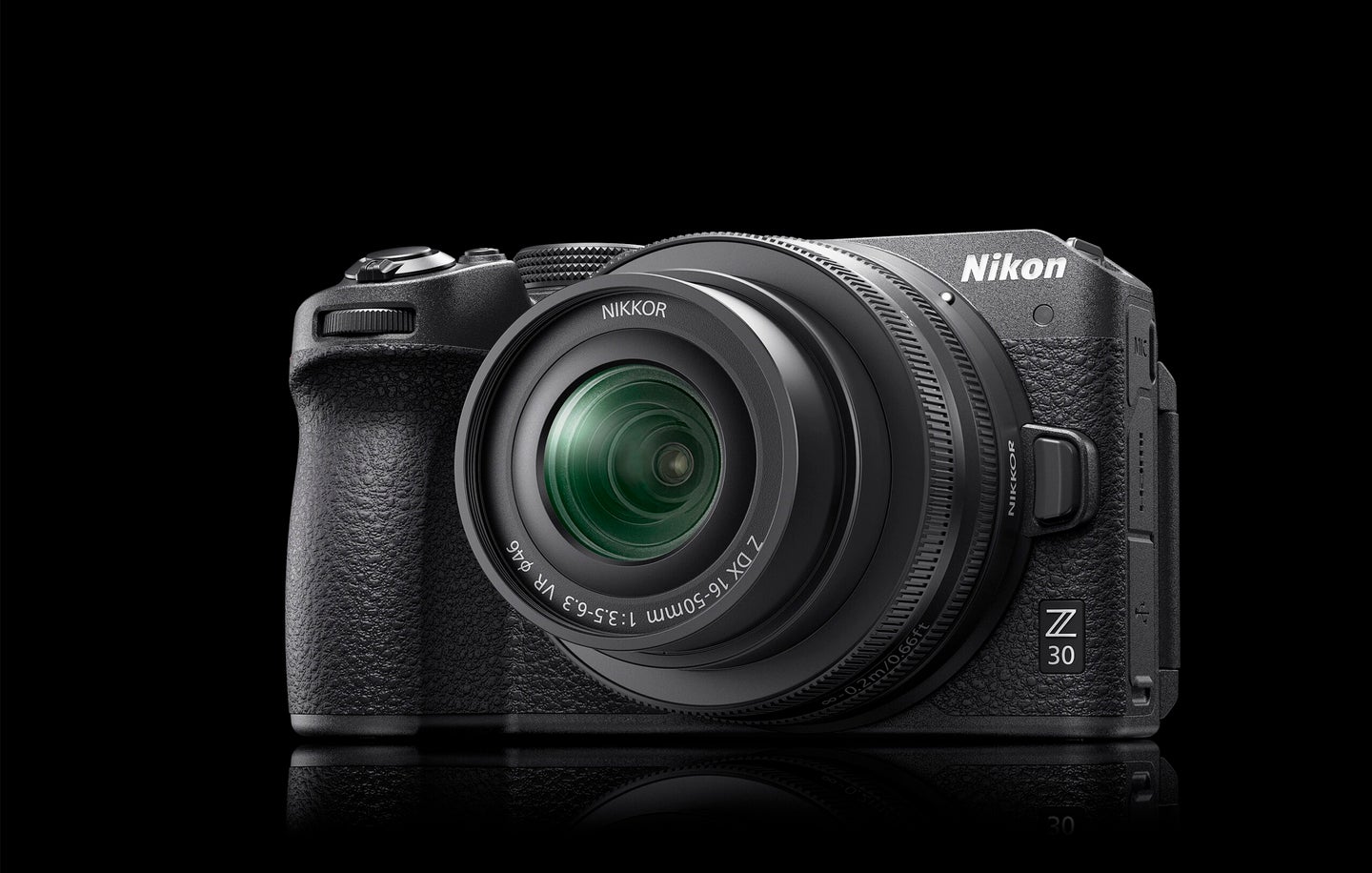 Nikon is hoping to appeal to the video content-creating crowd with the launch of its new Nikon Z30 mirrorless camera. Though the brand’s mirrorless cameras have long boasted impressive video chops—the Nikon Z50 is our favorite camera for Youtubers under $1K—this is the Nikon’s first built specifically with vloggers and streamers in mind.

The Nikon Z30 offers a solid set of video features at a fairly impressive price point. These features include a compact and lightweight design, a selfie touchscreen, a built-in stereo microphone and microphone jack, an impressive record limit, streaming capability, and of course, highly-detailed 4K video capture.

As mentioned, the Z30 is geared toward the video market, specifically, young content creators. Nikon is hoping that vloggers and streamers, wishing for better video quality than their smartphones may offer, will consider it. In gathering user feedback to build the camera, Nikon notes that features like a lightweight design, good battery life, solid lowlight performance, clear audio, a selfie screen, the ability to blur a background, and an affordable price, were most important.

Given the above, we think Nikon has come darn close to creating one of the best bang-for-your-buck video cameras, currently available. That said, we’ll hold off making a final judgment call until we have one in hand. Still, any video content creators looking to step up their gear game would be wise to give the Z30 an honest look. That being said…

Compared to its peers

Related: Finally, the Sony a6400 returns to production

There are considerations in choosing the Z30 for video, especially given what some of its peers offer. The Sony a6400, for instance, offers a higher-resolution sensor and likely (we’ve yet to test the Z30) more accurate AF tracking. It also sports an EVF, which the Z30 does not. However, the Sony costs a good bit more than the Z30 (despite being on the market much longer).

The Fujifilm X-T30 II is also a direct competitor to the Z30. Like the Sony, it sports a higher-resolution sensor (and an EVF) and is a bit pricier than the Nikon. It also boasts a significantly faster burst rate when shooting stills. But with a continuous video capture cap of 10-minutes in 4K—compared to 35 minutes on the Nikon—and no selfie screen, the latter is likely still a better choice for video folks.

That being said, unlike Sony and Fujifilm, Nikon’s range of lenses for its APS-C mirrorless system is rather limited at the moment. You can view Nikon’s DX Z-mount optics here. Of course, full-frame Z-mount glass will work just fine on crop sensor bodies. And affordable primes, like the Z 40mm f/2, are a lovely match for cameras like the Z30 and Z50—the 40mm, in particular, provides a 60mm equivalent field of view.

Though this is a new camera, the majority of its “guts” are a known quantity, shared with the more stills/video-focused Nikon Z50, as well as the retro-styled Z fc. Unlike those APS-C cameras, the Z30 offers no electronic viewfinder, which likely contributes to its considerably lower body-only price.

Footage can be captured at up to 4K/30p using the entire sensor (no crop). For slow-motion video, the Z30 shoots 1080/120p also with no crop. There’s no in-body image stabilization. However, Nikon does offer electronic stabilization in video mode, called E-VR. Using it comes with a 10% crop, which means the widest equivalent focal length you’ll be able to achieve (using the kit lens) is ~26mm. Additionally, users can shoot with the camera in a vertical orientation when creating content for TikTok, Instagram Reels, etc.

When shooting a full-HD video, the record limit is an impressive 125 minutes. In 4K mode, you should be able to get up to 35 minutes of continuous capture (the shorter record time is due to camera heat). When plugged into a power source via USB-C, the camera can be run continuously (again, until heat becomes a factor). Speaking of which, a Micro HDMI port can be used for recording video to an external device, for streaming, and for using the Z30 as a webcam.

Eye detection AF can be used to track subjects around the frame in both video and stills mode. Better yet, Nikon says the AF algorithms in the Z30 have been tweaked/improved compared to the Z50 and Z fc. This should hopefully result in more accurate AF subject tracking, across the board. The AF system is also now sensitive down to -3 EV, which should result in more reliable performance when shooting in dimly lit settings.

Like its APS-C siblings, the Z30 can shoot bursts at up to 11 fps with continuous AF and AE. However, if you want a live feed of the action, you’ll have to step down to a 5 fps burst speed.

Unsurprisingly, the Z30 uses the same EN-EL25 battery as its crop-sensor siblings. Battery life is CIPA-rated at a respectable 330 shots per charge on the stills side, and 75 minutes of capture on the video side. That said, you’ll more likely than not surpass those ratings in real-world use.

For storage, the Z30 offers one UHS-I SD slot.

The Z30 plays nice with Nikon’s SnapBridge app, which can be used to control the camera remotely and/or transmit photos and videos via Bluetooth/WiFi. Vloggers, in particular, may find the app’s remote control functionality useful.

In terms of physical connectivity, you’ll find a standard 3.5mm microphone jack, a USB-C port, and a Micro HDMI port along the side of the camera—there is, sadly, no headphone port. On top is a standard hotshoe.

The Z30 is Nikon’s most compact and lightweight Z-mount body to date. Yet, it offers a hearty grip and plenty of controls, many of them customizable. Two of those programmable function buttons can be found on the front of the body, near the lens mount. The front also sports a tally/record lamp in the upper right, as well as one of the camera’s two control dials (located on the grip).

On top, you’ll find the second control dial, an oversized record button, a mode dial, the hotshoe, and the stereo microphone. The grip sports Nikon’s classic wrap-around-style on/off switch, the shutter release, an ISO button, and an exposure compensation button.

Moving to the rear, we’ve got a somewhat petite 3-inch, fully-articulating touchscreen, along with an array of buttons, including an 8-way controller and information button. The latter can be used when browsing the menus to help users decipher what various settings mean.

Like all of Nikon’s recent ILCs, users can also fully customize a 12-slot “iMenu” with their most-used settings. It’s also nice to see the inclusion of a video/stills switch on a camera at this price point. This allows users to easily jump between the two modes, saving different settings for each.

In addition to the Z30, Nikon has also announced several accessory kits to be sold alongside it. The Creators Accessory Kit includes a SmallRig tripod grip, Nikon’s ML-L7 Bluetooth remote, and a Rode VideoMicro microphone, for $149.95. Users can also pick up a hotshoe-mounted wind muff for the built-in microphone for $9.95.

The following sample photos have been provided by Nikon.