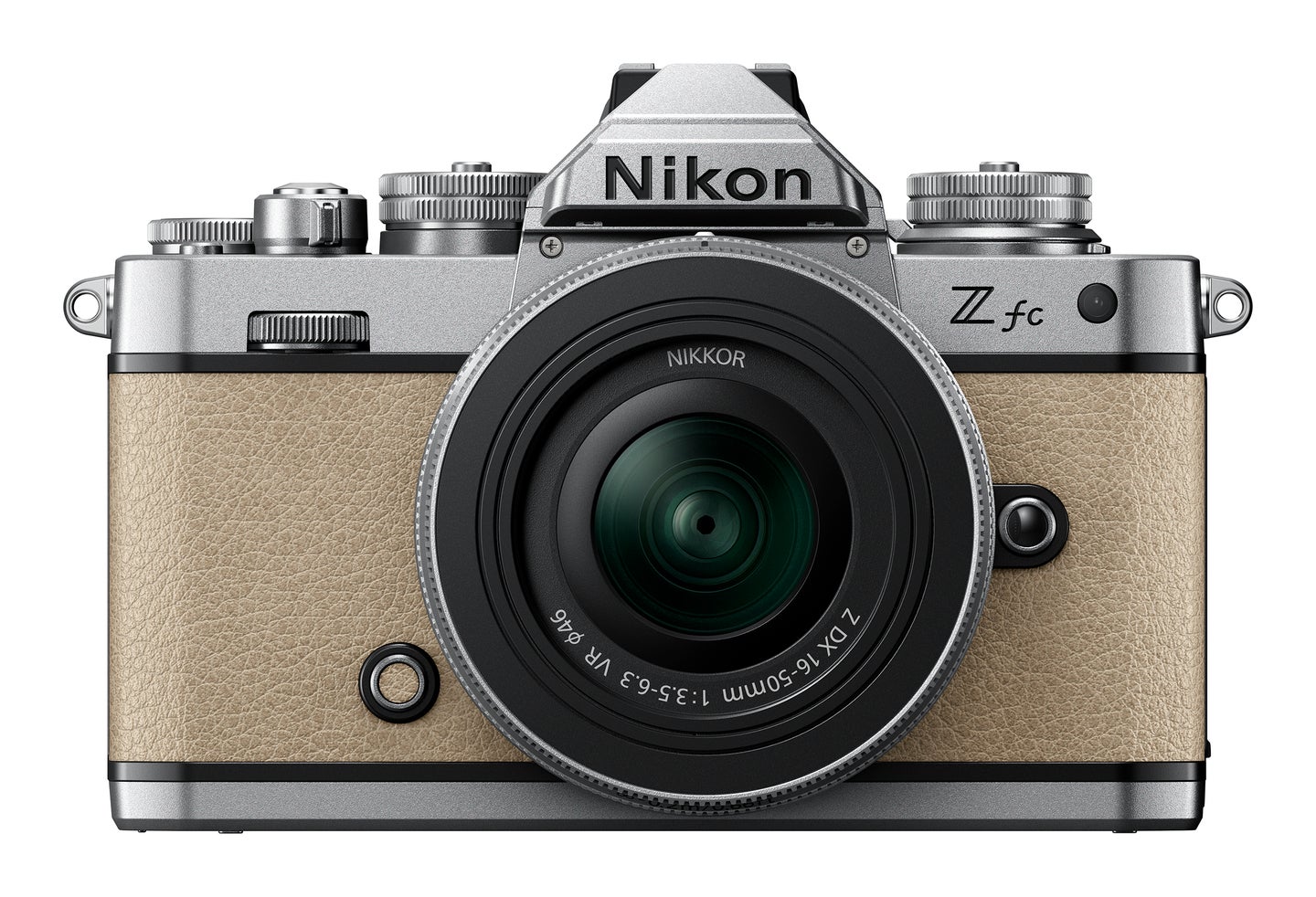 Take a quick glance at new Nikon Z Fc, and you’d be forgiven if you mistook it for a film camera. Despite its modern 20.9-megapixel sensor, Nikon’s newest DX-format (APS-C) body takes its design cues from the iconic FM2 film SLR. That includes a familiar viewfinder shape and classy leather wrap around the grips.

On paper, the spec sheet looks as you’d expect for a camera at this price point. The heart of the camera, a 20.9-megapixel DX-format sensor, is roughly 25 percent smaller than full-frame FX-format full-frame sensors. That choice makes sense for the camera’s $959 price, which aims squarely at the enthusiast market. The autofocus system covers roughly 85 percent of the frame in either direction and face tracking and other convenient modes that make mirrorless cameras appealing.

That sensor sits behind Nikon’s native mirrorless Z lens mount, which means it has access to Z-series lenses, as well as F-mount SLR lenses with help from an adapter.

With the adapter, the Z Fc has access to a huge number of old Nikon manual focus lenses that would look and feel incredible on this type of body. Now, adapting those lenses will only get you part of the picture they would otherwise provide. While the full-frame would be extremely nice, it’s also probably impractical here. Nikon wants to keep the cost relatively low. It also had a not-so-stellar experience with a retro-themed DSLR called the Df way back in 2013, That camera had a great sensor and a solid body, but it was pricey and didn’t find much commercial success.

While the imaging components are fairly stock, the body itself is a swing from Nikon. From the front it really almost could pass for a film camera if it weren’t for the front-facing control wheel. The top is similarly adorned with retro-style controls. Even the shape of the finder on top of the Z Fc is very similar to the FM2.

On the top-left of the camera, you’ll find an ISO wheel where the film rewind knob lives on the FM2. The shutter speed dial, hot shoe, and shutter button all remain consistent between the two cameras. Because the Z Fc doesn’t need a film advance lever, Nikon has replaced it with an exposure compensation dial. Of course, the new digital camera also has a video record button that the FM2 lacks.  I haven’t had the chance to touch the Z Fc yet, but it’s rare tactile knobs and buttons hurt a camera’s handling and usability.

Rounding out the feature liste, you won’t find many surprises. The 3-inch, 1 million dot screen seems fairly stock for this category, but it’s fully articulated for shooting at unusual angles. The Z Fc  can shoot UHD 4K video at a variety of framerates, and built-in WiFi keeps it connected to the Nikon app while you’re shooting.

You’ll notice that there’s a new kit lens attached to the front of the Z Fc in the press photos. The $299 NIKKOR Z DX 16-50mm f/3.5-6.3 VR isn’t particularly fast, but it’s small and light, which matches the Z Fc’s overall vibe.

Nikon also announced another, even more interesting lens: the NIKKOR Z 28mm f/2.8 (SE). This piece of glass mimics the look of old Nikon F-mount SLR lenses. From the side, it could almost pass as an old school wide-angle lens. It will also cost $299 when it comes out later this year. Given the the APS-C sensor, though, even these promising lenses are a slight disappointment.

When can you get the Nikon Z Fc?

You’ll be able to scoop up Nikon’s newest mirrorless camera in late July. The body will cost $959, while a kit with the kit zoom lens will run $1,099. If you’d prefer a kit with the new 28mm retro prime lens, the price of the package goes up to $1,199. Look for a full review down the road. The FM2 left some big shoes to fill.

Other cameras with vintage looks

While the Z Fc is the newest retro-inspired digital camera on the market, it’s certainly not the only one. Here are some other options if you’re looking for vintage looks with modern guts.