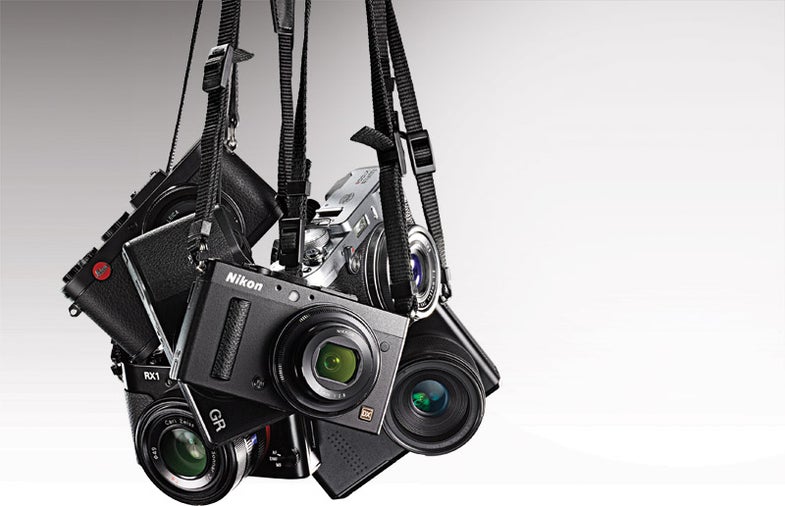 With the introduction of the Nikon Coolpix A and the Ricoh GR—the number of little fixed-lens cameras with APS-C-sized sensors comes to seven (leaving aside the one full-framer). And that’s a big deal for a category that’s just a few years old.

Many readers may remember tiny 35mm cameras with big performance such as the Minox 35, the Rollei 35 (described as being as big as a cigarette pack—remember that size reference?), the Olympus XA series, and a dark gray magnesium tanklet, the GR1, from an iconoclastic company named Ricoh. And that’s besides the raft of fixed-lens rangefinders, such as the beloved Canonet.

But enough with the nostalgia already. How is it that large-sensor fixed-lens digital compacts (no, we will not call them LSFLDCs) have suddenly reached critical mass?

The Long Gestation
The real question: Why did it take so long for camera manufacturers to put big sensors in digital compacts? If you can make a full-frame 35mm camera (with a film autowind mechanism, no less) in a pocket size, why not with digital? There are many answers, both technological and economic.

The key factor is that these cameras are aimed squarely at DSLR (and ILC) shooters. While we’re sure a certain percentage of buyers will do so solely because of the style—or the upscale cachet—of these compacts, the market for them will be mostly those who already own enthusiast-level cameras. (Some observers see them as “niche” products, but we predict it will be a pretty big niche.) To attract that audience, these cameras have to be very good indeed.

As recently as five years ago, the technology wasn’t advanced enough to make cameras like these, or at least make them at viable price levels. A large sensor (in physical size and pixel count) requires a lot of processing power, and processor circuitry can take up a lot of room.

Buffer memory is even more of a size issue. A decent burst rate, or even just a short time lag between single frames, is non-negotiable for serious shooters. But both of those things require a big and fast buffer, another component that would have taken up too much room to make a genuinely compact camera in the past. (Remember five years ago, when a 4GB SD memory card was considered humongous?)

Then there is the issue of heat buildup in cameras. Larger sensors throw off more heat, and heat is a known cause of digital noise. This is less of an issue in DSLRs, which have more internal volume and space for heat sinks. But it remains a real issue for compacts.

In the past few years there have been dramatic increases in buffer memory and/or reductions in the physical size of the buffer component. (We’re using 256GB SD cards—64 times the memory—and read/write speeds are proportionally higher, too.) Processors have come up in power and down in size, as well, and components of the sensor chip itself can be used to serve processing functions.

More components can be placed on a single circuit board, rather than on several boards in different locations within the cameras. Sensor chips today run cooler, although still not enough to provide as much noise suppression as DSLRs can do.

One big factor to the critical mass of this new breed of high-performance compacts is the maturation of the DSLR market. Pretty much everyone who wants a DSLR has one, and many are on their second or third or fourth DSLR. And just as happened in the 1980s and 1990s, these shooters are hankering for pocket cameras that can give them the imaging quality they expect from their cameras. And more.

Pros and Cons of the New Compacts
The major reason for a big sensor, of course, is image quality: high resolution, with low noise and accurate colors. Our table on page 70 shows Popular Photography Lab Test results for these cameras at a glance. As you can see, the results are pretty close for the whole pack, with some numbers so close as to be statistically insignificant. All told, you can expect about the same image quality from these cameras as you’d get from a 16MP DSLR, at least up to ISO 1600 or so.

To be sure, “advanced compacts” such as Canon’s PowerShot G series, Nikon’s Coolpix P models, and Panasonic’s Lumix LX line can provide near-DSLR image quality levels, at least at moderate ISO levels. But there’s another big plus to the big sensor: the ability to limit depth of field far more than the smaller sensors in these cameras can. For reference, f/2.8 on a Canon G12 will give you the same depth of field as will f/9 on an APS-C sensor camera, with both set to a 28mm equivalent.

Limitations, there are a few. To have reasonably large-apertures and compact lenses, the optics have a single focal length—zooms need not apply.

The issue of sensor heat is evident in the imaging performance of the cameras. Typically they reach tested Unacceptable noise levels at one or two ISO steps lower than a DSLR equivalent, and the extra noise suppression needed also drops resolution down a notch as well. The fact is, as good as these cameras are, they actually underperform compared to interchangeable-lens cameras with the same or similar sensors.

Shooters Check In
We found several pro photographers who are using large- sensor compacts and asked them about their experiences. Full disclosure: Because two of the camera models, the Nikon and the Ricoh, hadn’t yet arrived in stores as we were putting this issue together, two of these shooters had inside connections with the manufacturers of their cameras, and some of their work is being used to promote them.

EJ Camp (ejcamp.com) is a New York City-based pro known for celebrity portraits, advertising work, and architecture, as well as land- and seascapes. She keeps a Leica X2 in her bag as she tools around Manhattan on a bicycle.

“Generally, I shoot my color photographs with a medium-format Leica S2 and my black-and-whites with a large-format Linhof 4×5 Master Technika,” she tells us. “Both cameras are considered very light and transportable for their size group, but neither fits into a shoulder bag easily.”

She chose the X2 because, she says, “as you can see from my choice of camera gear, I want the most image information possible for my photos. The same is true of my compact camera—although it would be more appropriate to call the Leica X2 a get-up-and-go camera, rather than a compact camera, because other than its size, it has very little in common with other compact cameras.”

Doug Menuez, also based in New York, is a documentary photographer who was commissioned by Nikon to do a three-day shoot of life in the city for promotional materials. Hurricane Sandy showed up precisely during that time.

“I always like to have a camera with me,” he says. “The biggest bummer with most small point-and-shoots is the files just don’t stand up if you want to make big prints. So it’s about being able to capture moments wherever you are.” Menuez also credits the plain, stealthy looks of the small camera with making it easier to approach subjects on the street—they aren’t intimidated by something that doesn’t look like a “good” camera.

Rachel Shaver is a newspaper and magazine photojournalist who now serves as marketing support assistant for Pentax Ricoh imaging and hence was able to try a GR before its official release.

“It’s so nice to be able to leave my DSLR at home from time to time, and just grab the GR and go,” she says. “I have taken everyday snapshots, portraits, landscapes, still life, and some lifestyle.”

None of these shooters see a fixed focal length as a limitation. “I use this camera primarily outdoors or for environmental portraits, which is what most people probably do with a compact, and the 24mm lens is ideal,” says Camp. “It’s more in keeping with a photojournalist—yesterday’s blogger—kind of gear and lens.”

Shaver explains, “I have the most fun as a photographer when I am thinking, scheming, moving my body, getting closer, talking to people, and trying new things to get my shot. With a fixed focal length you have to do all of those things at some point. In some ways, without the intimidation of a DSLR or a large lens, this camera really helps the photographer to be in the moment with the subjects.”

Doug Menuez adds, “There is a beauty and discipline to limitation. Creativity thrives within a set of limitations. It forces you to edit. You can’t shoot everything all the time anyway. Why not be more Zen, more focused, and pay attention to what is possible and what comes your way?”

And let’s not forget the element of style. “I am the proud and vain owner of the Paul Smith Limited Edition X2,” EJ Camp says. “I’m a huge fan of Paul Smith and I wear a lot of his clothes. It also comes with a very retro tan leather half-case. I wear the camera with the half case when running around town, and when I go to a black-tie event, I take the case off and wear the camera slung on my shoulder like an expensive evening bag—which it kind of is.”