A sharp shooter with a single focal length. 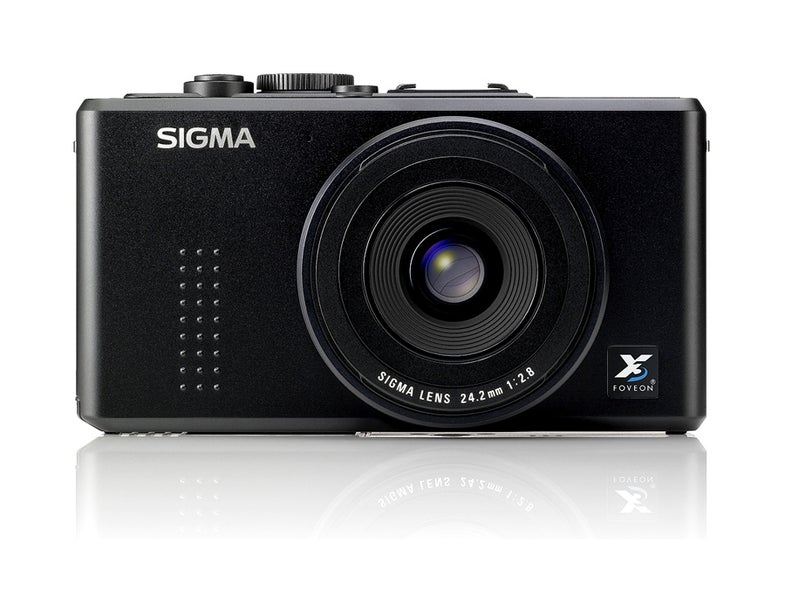 You’ve heard of “advanced compact” cameras-those pocketable powerhouses that shoot RAW, sport hot-shoes, and give you much more control than typical point-and-shoots.

But Sigma’s DP2 ($650, street) is different from many of those, such as the Canon PowerShot G12, Nikon Coolpix P6000, Panasonic Lumix DMC-LX3. It fits into a subcategory comprising just three others, including an older current model, the DP1, and Ricoh’s GR Digital and GR Digital II: all have high-quality lenses, with fixed focal lengths. If you want to zoom in or out, you’ve got to do it with your feet.

The DP2’s gorgeous seven-element lens, full of aspherics and lowdispersion glass, will appeal to shooters who mainly use primes anyway. And Sigma’s sensor, designed for its DSLR models, has nearly seven times the area of the ones used in other advanced compacts-called the Foveon X3, it has a unique, three-layer design.

This new camera improves on the DP1, tested in our May 2008 issue. Its lens has a longer focal length (equivalent to 41mm on a full-frame sensor, up from 28mm) and is brighter (f/2.8, rather than f/4), for better lowlight performance and shallower depth of field. It uses a faster processing engine. And it has a new QS (“quick set”) button for speedier access to frequently changed settings, such as ISO, meter pattern, and white balance.

In imaging ability, the DP2 doesn’t disappoint. On RAW files converted to TIFFs in Sigma’s Photo Pro software at the default settings, tested resolution rated High through ISO 1600 and Acceptable at ISO 3200. Its scores might have been higher were it not for occasional banding that blurred finer detail in our test target.

In noise control, the DP2 outshines its class. Its Extremely Low noise at ISO 50 and 100 is almost unheard of in a compact. At higher sensitivities, it did get noisy: Pictures at ISO 1600 are usable, if grainy; at ISO 3200, we’d advise converting to black-and-white.
Color accuracy was stellar-one of the best scores we’ve seen in any camera of any type. Put it all together and you have imaging about on a par with a good 10MP DSLR.

But numbers don’t tell the whole story. We were looking at scenic shots-the greens of summer- converted from RAW at Photo Pro’s default color profile, Standard, which stresses accuracy over saturation, when something about the sharp detail, creamy gradation, and slightly subdued color rang a far-off bell.

Then it came to us: Kodachrome.

The images looked very much like Kodachrome slides, revered for their accurate color and crisp detail. (The DP2, though, does yellow better.) With RAW processing, of course, you can opt for a whole variety of looks- develop the files with Vivid color, shove up the saturation sliders, etc. But we like that old-school Kodachrome look.

We recommend shooting in RAW- resolution and noise control take a hit in JPEG images made with this camera, so reserve JPEGs for snapshots. (We’re pretty sure the type of person who chooses this camera will be a RAW shooter anyway.) The DP2 can’t capture RAW and JPEGs simultaneously-it’s either/or. In addition to the included Pro Photo software, Adobe Camera RAW supports Sigma’s X3F RAW file format.

The camera’s sleek design clearly involved some compromises. As with most compacts, there’s no viewfinder, just a 2.5-inch LCD-small by today’s standards. The die-cast aluminum body is exceptionally well made, and the controls well placed, but we found the button labels hard to read.
Two accessories improve the handling. The HA-1 Hood and Filter Adapter ($30, street), a nice square lenshood, provides an extension that helps you grip the lens. And the VF-21 Viewfinder ($200, street), which slides into the hot-shoe, is good for grab shots and makes for steadier handholding.

That’s a good thing, because the DP2 lacks image stabilization-surprising, since this feature is now standard even in $150 point-and-shoots.
The autofocus, which strikes us as speedier than that of the DP1, is still slow to lock on. (We’re unable to test this type of AF system in our lab to measure exact speed.) And the video seems an afterthought, even for a compact-tiny 320×240-pixel files.

The whole point of the DP2 is that it’s not a DSLR. It’s a camera to slip in your pocket every day and use while wandering around during lunch hour. Small and discreet, it’s a street-shooter’s instrument. The single focal length soon stops being a limitation and starts being fun: You spend time looking at the composition, not cranking a zoom back and forth. You move in or back up to change your field of view. And when you look at your photos, you may even think of a certain Paul Simon song.

BURST RATE: Full-sized JPEGs (Fine mode), up to four shots at 3 frames per second; RAW up to three shots at 3 fps.

VIEWFINDER: None. Optional VS-21 bright-frame viewfinder fits in hot-shoe.