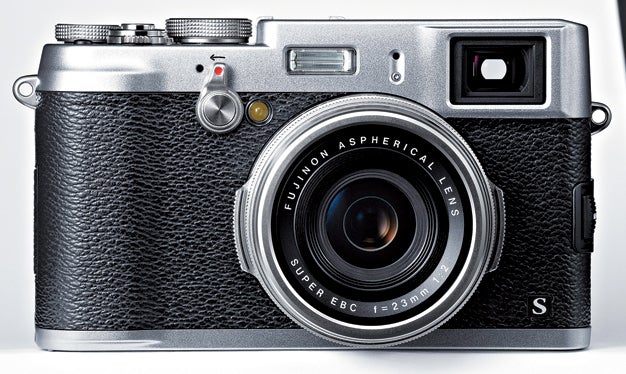 After achieving near-instant cult status with its rangefinder homage, the X100, Fujifilm had to tread lightly in designing the follow-up model. Fiddle too much with success of this fixed-lens compact camera, and risk alienating the many photographers who loved the original. That original, though, left considerable room for improvement: sluggish autofocus by today’s standards, manual focusing that didn’t really feel like a rangefinder’s, and some camera functions buried deep in the menus.

With the Fujifilm X100S ($1,300, street), Fujifilm has addressed with aplomb most of the issues we had with its predecessor. Of particular note is the addition of phase-detection AF sensors embedded in its imaging sensor (an approach that has been gaining favor ever since Nikon introduced it in its System 1 cameras). Fujifilm points to this as one of the reasons for the increased AF speed in the Fujifilm X100S compared with the X100. These phase-detection sensors are also employed during manual focusing to allow for a new visual aid, dubbed Digital Split Image. This mimics the split-image area found in rangefinders and many film-era SLR finder screens.

Also of note is the 16.3MP APS-C-sized X-Trans CMOS II sensor used in the Fujifilm X100S. The X100 had a 12.3MP CMOS sensor using a conventional Bayer color filter array instead of the X-Trans array Fujifilm created for its X-Pro 1 and XE-1 camera bodies. The increased resolution pays off nicely, as we discovered when we ran the X100S through our battery of lab tests.

The boost in resolving power that the new sensor brings was just enough for the X100S to earn top honors in our resolution test. The camera served up 2525 lines per picture height at ISO 200 when we converted shots of our test target from RAW to 16-bit TIFFs using the special version of SilkyPix software that ships with the Fujifilm X100S. (Like the X100, it allows the option of ISO 100 only with JPEG capture. Here, the camera achieved 2550 lines, its best resolution result.)

The result at ISO 25,600—also JPEG only—was 2140 lines, and marked the X100S’ lowest resolution in our test. At ISO 6400, the highest setting at which you can shoot RAW images, it resolved 2310 lines. Compared with its predecessor, the Fujifilm X100S gains 200 to 300 lines across its standard range of sensitivity—a noticeable improvement.

In our color accuracy test, the X100S showed an average Delta E of 6.0 (essentially the same as its predecessor), easily earning an Excellent rating.

But when it comes to noise, the extra pixels in the X100S might be seen as a detriment. At every standard ISO, the images converted from RAW resulted in higher noise than we saw in its predecessor. Furthermore, the camera kept noise to acceptable levels only up to ISO 1600, one stop less than the X100 did. The X100S managed to keep noise to a Low or better rating up to ISO 400, our cutoff for maintaining an Excellent rating in overall image quality, which also requires Excellent ratings in both resolution and color accuracy. Coincidentally, ISO 400 is also the highest ISO where the Fujifilm X100S retains enough resolution for an Excellent rating. At ISO 800 resolution was 2450 lines (for an Extremely High rating) and noise scored 2.3 (for a Moderately Low rating).

While it looks nearly identical to its predecessor, the X100S proved even more pleasing to use. The hybrid optical/electronic viewfinder has been upgraded to a 2,350,000-dot LCD EVF. While this stutters a bit during burst capture, it’s not much of an issue with this camera, which we don’t see being used often for rapid-fire shooting. The optical finder shows an overlaid bright frame to indicate the edge of the image area; other info, such as an exposure-compensation scale, shutter speed, and ISO, surround this frame. Meanwhile, a small box inside the bright frame indicates the location of the AF point. If you notice the frame guide shifting when you’re focused on objects very close to you, don’t be alarmed. That’s just the camera adjusting for parallax error. Trust the framelines, and your pictures will turn out composed as you intended.

While the metal chassis and magnesium-alloy top and bottom plates carry over from the X100, a couple of buttons are different. The RAW button on the X100 has been replaced with a Q button that lets you access the very useful quick menu. The AF button that used to be to the left of the LCD has been swapped with the drive function and now occupies the up position on the four-way controller, located to the right of the screen. Since you use the four-way controller to select the desired AF point, this makes a lot of sense and proved faster to use in our field tests. There is still no dedicated button for ISO, but you can change it through the quick menu. Or, you can do as we did and assign it to the tiny function button to the right of the shutter-release button. As we did with the X100, we left this button assigned to ISO for nearly our entire field testing.

In our test of the X100, we criticized the camera for behaving more like a point-and-shoot than an advanced compact in certain functions. For instance, it would let you use the self-timer for only one shot before reverting to non-timed capture. That’s no longer the case. The menus are now grouped into numerous tabs on the left of the LCD screen, making it fairly easy to find whatever you might want to adjust. And though it’s now easily accessible in the quick menu, we appreciate that Fujifilm placed the self-timer atop the first menu page.

For manually focusing, the new Digital Split Image is quite nice. It zooms in on the center area of the finder and divides it into four horizontal bars. Turn the focusing ring on the lens so that these bars align, and your image is in focus. It’s not the same as a traditional coupled split-image rangefinder, but focusing this way is a pleasant experience nonetheless.

Occasionally we encountered a subject that didn’t lend itself to horizontal alignment. In such cases, you can use focus peaking, as well as zoom assist. The distance scale remains on the bottom of the display. We should also mention that the focusing ring is significantly more responsive than the one on the X100. If you make a couple of quick movements of the ring, you can get from one end of the focusing range to the other.

Autofocus is definitely faster than with the X100, especially in bright light, where it rivals the fastest ILCs we’ve tested. As any AF system will, it slows considerably in low light. But, for a mirrorless hybrid AF system, the Fujifilm X100S performs well.

We doubt that many people will buy the Fujifilm X100S specifically to capture video, but for those photographers who plan to use this option, the X100S does a fine job. Video maxes out at 1920x1080p60, and footage that we shot showed plenty of detail and minimal artifacts. We did find it strange, though, that you have to use the drive-mode function to enter video. Perhaps it’s not all that odd, given that there’s no shooting mode dial—instead, you select A on the shutter speed dial or the aperture ring to enable auto or priority-mode shooting. Once we got used to where the movie selector was, this wasn’t a big problem.

Ultimately, we really enjoyed using the X100S. It showed itself to be a noticeable improvement over the X100 while still retaining that model’s virtues. We particularly appreciate that Fujifilm retained the threaded cable release socket in the shutter button—kudos for that.

Given the price of the Fujifilm X100S, it is difficult to draw comparisons. For the same bucks, you could easily get a camera that performs as well and accepts interchangeable lenses. But the compactness and the overall experience wouldn’t be the same.

Furthermore, with the possible exception of Olympus’s OM-D E-M5, few ILCs look as stylish as the X100S. One of our editors found that people on the street struck up conversations with him by asking about the camera—there’s no denying the cool factor.

While we’re quite pleased with the imaging performance of the Fujifilm X100S, the large-sensored compact market recently welcomed both the Nikon Coolpix A and the Ricoh GR. Fujifilm certainly threw down the gauntlet, and we’re looking forward to seeing how the competition stacks up in the Popular Photography Test Lab.