A 28mm equivalent lens to go with that big sensor 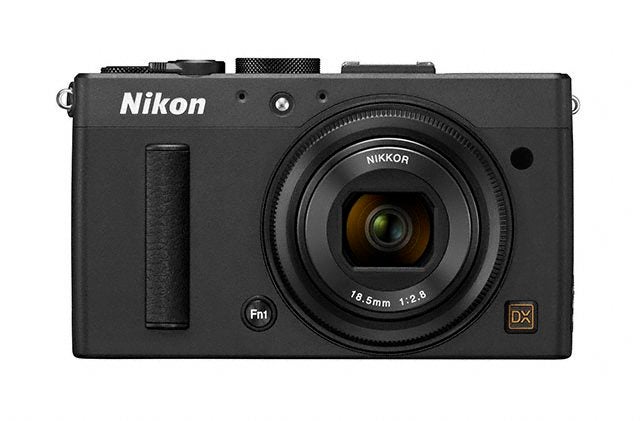 Big sensors crammed into little cameras has become the name of the game lately. Sony’s insane RX1 full-frame compact is still the champ when it comes to putting a big chip in a little box, but now Nikon has packed a 16.2-megapixel DX-format (APS-C) sensor into a compact of their own.

The Coolpix A has an all-black body that’s rather unassuming. Inside, however, it has the guts of a DSLR. In front of that big chip is a fixed lens with a 28mm equivalent field of view and a maximum aperture of F/2.8. It’s a bit on the wide side, as we might have expected them to go with a 35mm equivalent, but in a compact that might be used for group shots, it makes sense.

As you’d expect from a compact at this level, you get full manual controls including the priority shooting modes that can be accessed with a traditional mode dial. There’s another dial on the top of the camera to handle standard operations and it supports RAW capture as well.

There’s no EVF or integrated optical viewfinder, but they will be offering one as an add-on accessory, which is called the DF-CP1, which will cost a substantial $449. They’re also releasing a ring adapter to accommodate things like lens hoods and filters.

Now, you’re definitely wondering what all of this costs. When the Coolpix A hits stores this month, it will bring with it a price tag just shy of $1,100. That puts it on the same playing field as the Fujifilm X100s, which has a few advantages, the most substantial of which is the built-in hybrid EVF. Of course, the Coolpix A is also a decidedly smaller camera, so it will be interesting to see how the two ultimately compare.

That price also buys you a pop-up flash and a hot-shoe, which makes it compatible with Nikon flashes and accessories.

We should have a testable unit in our hands fairly soon, so we’ll let you know how it performs as soon as we have the results.

MELVILLE, N.Y. – Today, Nikon Inc. announced two new advanced performance COOLPIX cameras, built for the customer seeking the best image quality possible with the convenience and ease-of-use of a compact camera. The Nikon COOLPIX A is the first COOLPIX to incorporate a DX-format sensor, similar to those found in many of Nikon’s coveted D-SLRs, which provides the highest image quality possible from a compact point-and-shoot. Additionally, the small yet powerful COOLPIX P330 fits comfortably into a shirt pocket, yet gives users the confidence to capture beautiful imagery through amazing optics, low-light capabilities and creative control.

“The introduction of the COOLPIX A, as Nikon’s flagship COOLPIX camera, provides uncompromised image quality and incredibly sharp detail in a compact point-and-shoot camera. As the first COOLPIX to use a DX-format sensor, the COOLPIX A will exceed expectations for its unsurpassed performance,” said Bo Kajiwara, Vice President of Marketing, Planning and Customer Experience, Nikon Inc. “The COOLPIX A, along with the COOLPIX P330, demonstrates the forward-looking direction of the Advanced Performance COOLPIX line, and packs all of the benefits of Nikon’s optical heritage and imaging experience into a compact, yet powerful package.”

For those who never settle for second best, this new duo presents the optimal choice to consistently capture high-quality images and HD video with outstanding clarity and detail. Thanks to their exceptional CMOS imaging sensors and world-class NIKKOR lenses, these cameras deliver brilliant photos amidst the action, even in low-light conditions. With compact designs and advanced feature sets that allow users to easily grow and improve their image or video shooting skills, these new COOLPIX cameras provide creative control and connectivity options for the photographer in everyone. These new cameras also join the ultra-zoom COOLPIX P520 and performance powerhouse COOLPIX P7700 in Nikon’s series of COOLPIX Advanced Performance cameras.

Once a still or video has been captured, both cameras let users share images instantly with family and friends when connected using the optional WU-1a Wireless Mobile Adapter1. This accessory pairs with the free downloadable Wireless Mobile Utility application1, which enables users to transfer their images and videos to compatible smart devices and tablets for easy sharing and viewing with others.

Unlike any other COOLPIX camera, the new COOLPIX A is equipped with a DX-format CMOS sensor that enables users to achieve superior image quality previously only possible with a Nikon D-SLR. The combination of this 16.2-megapixel DX-format sensor and ultra-sharp prime NIKKOR lens firmly positions the COOLPIX A as the reigning flagship camera in the COOLPIX line.

The all-glass 18.5mm (28mm equivalent) prime lens has an f/2.8 aperture, allowing users to shoot with a shallow depth of field to blur backgrounds for professional-looking photos. Even when the sun goes down, the lens offers the ability to turn a fleeting glance into a flattering moonlit portrait with just a press of the shutter. Always ready for the spontaneous moment, the camera’s quick AF performance and 4 frames-per-second (fps) burst help users to consistently capture any moment with outstanding image quality.

For those who want to push their photography skills, the versatile COOLPIX A also offers advanced settings to allow shooters to have complete creative control to master nearly any shooting situation. With multiple Scene Modes, a familiar manual focus ring, full manual exposure controls (P,S,A,M), and the ability to shoot RAW/NEF image files, even a simple snapshot can be transformed into artistic expression.

Additionally, the COOLPIX A offers a variety of accessories to enhance the shooting experience, including the DF-CP1 Optical Viewfinder, the UR-E24 Adapter Ring for attaching lens hoods and filters, and the HN-CP18 metal Lens Hood, which helps protect the surface of the lens and restricts light from passing through without negatively influencing images. The camera also has a full size hot shoe port that makes the camera compatible with various accessories such as Nikon Speedlights.

**The COOLPIX P330: Big Performance from a Tiny Camera **

The COOLPIX P330 offers a useful 5x wide angle to telephoto (24mm-120mm, 35mm equivalent) zoom and cutting-edge features in a sleek, portable design for exceptional images and HD video. The P330 has a 1/1.7-inch, 12.2-megapixel backside illuminated (BSI) CMOS sensor that offers users the ability to confidently capture vibrant photos with low noise. Additionally, the super-sharp f/1.8 lens is the fastest in the COOLPIX line, rendering photos and Full HD 1080p video with striking clarity in a variety of lighting conditions. The lens also includes Vibration Reduction image stabilization to further reduce the effects of image blur when shooting handheld. Designed for the user who wants a sophisticated camera with the option of an advanced feature set, the COOLPIX P330 includes manual controls (P,S,A,M) and can now capture NRW/RAW images.

The P330 also enables users to enhance their photography with the inclusion of various Scene Modes, as well as Nikon’s Easy Auto Mode for capturing beautiful imagery during scenic vacations, celebrations or everyday moments, all with the convenience of a small, portable size. Additionally, the camera incorporates Full HD Video with stereo sound, engaged with just a simple press of the dedicated video record button.

This high-performance camera also comes with built-in GPS capabilities so photographers can easily log even their most exotic travels by pinpointing the exact latitude and longitude where the image was captured.