Ricoh steps up with the GR APS-C compact camera 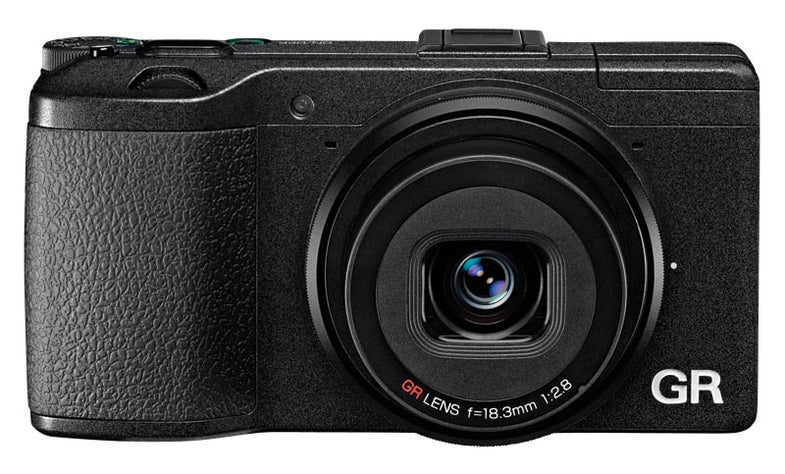 In case the 28mm equivalent lens is too wide for you, the GR has an option to crop down to a 35mm (equivalent) viewing angle, though it decreases the pixel count of your images to about 10.2MP.
SHARE

Ricoh had a hit back in the late 1990s with its GR1 compact film camera. Like the new Ricoh GR, that camera had a fast f/2.8 wide-angle lens in a body that could fit into any jacket pocket. Like Ricoh’s more recent GR Digital cameras, the new Ricoh GR sports a sensor instead of film. But with the drop of the word “Digital” from the model name comes a move to an APS-C-sized CMOS sensor that has about 8.6 times the surface area of the 1/1.7-inch CCD sensor found in its predecessor, the Ricoh GR Digital IV.

The Ricoh GR’s body design remains very similar to the earlier GR Digital line. While not the sleekest looking camera, the minimalist GR has a solid feel, thanks in part to its magnesium-alloy chassis. With a 16.2MP sensor and 28mm (equivalent) lens, the $797 (street) GR shows similar specs to Nikon’s Coolpix A. You can get the Ricoh, however, for about $300 less than the Nikon. As you might imagine, we wondered how the GR would fare in our tests. Read on to find out.

In the Test Lab
With wonderfully accurate color (when white balance is set properly), and an impressive ability to capture detail, the Ricoh GR earned an Extremely High rating from ISO 100 through ISO 400 in overall image quality.

In our color accuracy test, the GR had an average Delta E of 5.1. This score was achieved with the camera’s white balance set using a neutral gray card—a practice we always recommend for proper color reproduction. One reason: In our field testing, we found that the GR’s automatic white balance often failed to produce a neutral color rendition. In some instances, this lent a pleasing warm tone to images. But more often than not, we found ourselves fixing the white balance during RAW processing.

In our resolution tests, the GR showed a respectable result with 2425 lines per picture height at ISO 100, for an Extremely High rating. Much of this was retained at ISO 1600, where the camera captured 2375 lines. ISO 6400 brought a drop to 2290 lines—still within our Extemely High ratings band. At the camera’s top sensitivity of ISO 25,600, it turned in 2150 lines, which makes for a Very High rating on our scale.

The camera comes with a customized version of Silkypix RAW conversion software, which we used at default settings. (We lab-test all cameras using RAW files converted to TIFFs in the manufacturer-supplied software at default settings.) While Ricoh saw to it that the noise reduction defaults increase at ISO 1600 and ISO 6400, the GR still wound up reaching Unacceptable noise levels at ISO 3200 and above. It rated Low or better up to ISO 400. This places it slightly behind the Nikon Coolpix A in both resolution and noise control.

Photographers who convert in Adobe Camera Raw instead of Silkypix might be able to keep noise lower while preserving more detail. During field testing, we often used Adobe’s software, made easier by the fact that the GR captures its RAW files in the Adobe DNG file format.

A few other comparisons? The Fujifilm X100S eked out just enough resolution for an Excellent rating (with 2525 lines), but it, too, produced Unacceptable noise at ISO 3200 and higher; it showed extremely accurate colors and more consistently pleasing auto white balance. Sigma’s DP2 Merrill, which has a 40mm (equivalent) lens, trailed the GR in resolution (2360 lines at ISO 100) and Color Accuracy (average Delta E 7.9), and also reached Unacceptable noise at ISO 3200 and above. The Sigma tops out at ISO 6400, though, while the Fujifilm and Ricoh extend to ISO 25,600. You can look to PopPhoto.com for test results of the Leica X2—if you’d rather spend nearly $2,000 on a compact camera.

In the Field
Ricoh’s cameras typically have an understated look that can’t compete with the retro-chic design of Leica, or, for that matter, the Fujifilm X cameras. But the utilitarian plainness of the Ricoh GR means the camera won’t call attention to itself—unless you’re in a hipster enclave, in which case all eyes will be on the Ricoh.

Hipsterdom notwithstanding, we do love the design of the Ricoh GR. Exposure compensation is instantly available thanks to the tiny up/down rocker on the upper right of the camera back. You can switch between continuous and single-shot autofocus with a handy switch, toggle between five assignable settings with the clickable Adj lever, and assign one of 26 different functions to each of the two function buttons.

In manual mode, you can assign shutter speed and aperture to the Adj lever and the front command wheel as you see fit. While most camera makers seem to have some notion of which functions should be assigned where, and limit your choices accordingly, Ricoh leaves things wide open. This might be overwhelming to less experienced shooters; advanced photographers will love the flexibility that the Ricoh GR offers.

For a compact with an APS-C sensor, the GR does a pretty good job with close focusing. In normal mode, you can focus to just under a foot. That’s about 8 inches closer than the Nikon Coolpix A and 7.2 inches closer than the Fujifilm X100S. In macro mode, the Ricoh GR can focus as close as 3.9 inches—about the same as the Nikon and Fujifilm. To Ricoh’s credit, its macro focusing is pretty speedy and doesn’t hunt excessively, as the Nikon did in our field testing. Regular AF also proved quite fast—though not as fast as the X100S.

The GR’s Multi (i.e., evaluative) metering proved quite reliable and required compensation only in those instances that would flummox almost any meter. Its exposure comp range of +/– 4 EV eclipses the Fujifilm’s +/– 2 EV, though the Nikon trumps them both with +/– 5 EV. This is one of those areas where we question such limitations. Especially with more and more photographers exploring high-dynamic-range imaging, it doesn’t make much sense to limit exposure compensation arbitrarily. Fujifilm, at least, has the excuse that the dial used for this function can’t fit much beyond 2 EV, in 1/3-stops, in either direction.

The GR’s other nice features include a built-in intervalometer that lets you capture as many pictures as will fit on your memory card, separated by as many as 60 minutes or as little as 1 second between shots. The easy-to-use multiple exposure mode lets you combine up to four frames in a single image; it can also save each individual frame and shows a ghost of what has already been captured to aid in your ongoing composition. A custom self-timer lets you capture up to 10 shots in intervals from 1 to 10 seconds between shots.

Our gripes about the auto white balance aside, there are presets for four different kinds of fluorescent light, two varieties of incandescent, plus daylight, shade, cloudy, manual, and Kelvin temperature. For fans of silly filters, there are a slew of effects you can apply to add your favorite kind of flair to your images.

At 4 frames per second, the burst rate isn’t as fast as we’d like for shooting sports, but we don’t think a 28mm lens is really suited for that task. It would be nice to see the buffer hold more than four RAW frames before filling up, but again, we don’t see this as a burst shooter’s camera.

Similarly, while the Ricoh GR can capture 1920x1080p video at 30 fps, we don’t expect many people to rely on it as their main means of video recording. With this in mind, we were pleased with the footage we captured, as it showed plenty of detail, nice-looking colors, and few artifacts. The built-in mic is monaural, though, and there’s no minijack input to add an external mic.

When it comes down to it, a compact camera’s appeal relies very much on a pleasant shooting experience. We found that the GR’s interface and body design almost never got in the way of what we were trying to capture. Its small size can fit into spots that a DSLR could never enter, and its image quality at lower and mid-range ISOs is noticeably better than you’d get with less expensive compacts.

The Bottom Line
In the large-sensored-compact world, the Ricoh’s biggest asset of the Ricoh GR is its price tag. It’s the least expensive compact you can get in this class. More important, it delivers image quality that is good enough to rival DSLRs with a similar price tag, as long as you don’t push sensitivity too high.

But this is a strange, mixed class of cameras. Fujifilm’s X100S is one of the most stylish you can buy today. Likewise, Leica’s X2 evokes a traditional look and carries the coveted, and pricey, red dot that makes it stand out for the glitterati crowd. Sigma’s three DP Merrills have their own niche of Foveon fans and offer a variety of focal lengths to set them apart. That leaves the Nikon and this Ricoh to fill out the pack. The Nikon brings with it a major brand name that evokes serious imaging prowess. Amid all of this, the Ricoh GR stands tall with a great shooting experience, and impressive image quality for a price that sets the bar high for value.