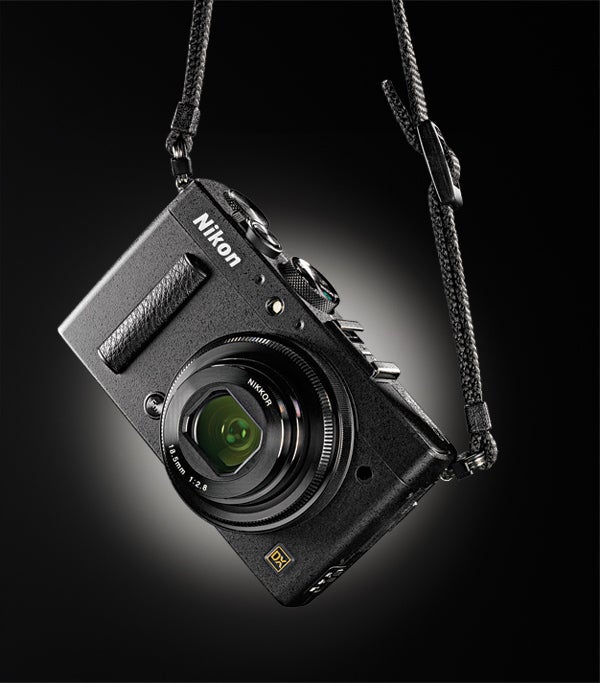 While Nikon’s approach to interchangeable-lens compacts—the Nikon 1 system—took a decidedly different direction than its line of DSLRs, the same can’t be said of its first Coolpix to sport an APS-C-sized sensor. The Nikon Coolpix A was clearly designed to make advanced Nikon shooters feel at home. The menus look like SLR menus, there’s a manual focusing ring, the “i” button brings up a dashboard of image settings, and a switch on the left side of the camera body lets you select the focusing mode. There’s even 14-bit RAW capture. On top of everything, this $1,097 (street) camera has a hot shoe that will let you mount an accessory flash or Nikon’s DF-CP1 ($379, street) optical viewfinder made to go with the Coolpix A’s 28mm (equivalent) f/2.8 Nikkor fixed prime lens.

With the Nikon Coolpix A’s DX-format 16.2MP CMOS sensor, Nikon shooters will have to accept less resolving power than the 24MP sensors many of the company’s DSLRs provide. But this camera finds itself right in line with the rest of the APS-C compacts currently available. How did it do in the Popular Photography Test Lab and in our field trials? Read on.

In the Test Lab
Plenty of resolution, super-accurate colors, and Nikon’s superior ability to control noise combine to give the Coolpix A an overall image quality rating of Extremely High from ISO 100 through ISO 1600. That puts it ahead of the Ricoh GR, which earned the same rating, but whose noise restricted this to a range of ISO 100 through 400.

As it stands, Nikon’s resolution lead is modest at best. The Nikon Coolpix A earned an Extremely High rating in our resolution test with 2450 lines per picture height at its lowest sensitivity of ISO 100. The Ricoh earned the same rating with 2425 lines. At ISO 1600, the Nikon served up 2400 lines, and the Ricoh 2375. These differences are negligible, but if you were to apply more noise reduction to the Ricoh’s images, you’d get to a point where the resolution discrepency would be meaningful.

While we’re on the topic of resolution, we should mention that Fujifilm’s X100S outresolved the Coolpix A with 2525 lines at ISO 200 (the lowest sensitivity at which it captures RAW images). At ISO 3200, the X100S turned in 2375 lines. That said, the Fujifilm doesn’t control noise nearly as well as the Nikon does, so resolution nearly ends up being a tie for all three of these cameras, especially at the low end of their sensitivity ranges, with the Fujifilm barely taking the lead.

The Coolpix A, which ships with Nikon’s View NX RAW converter, had the best noise performance we saw of any of the APS-C compacts when using the software that comes with the camera to convert from RAW to TIFF. It achieved top honors with Extremely Low noise ratings at both ISO 100 and ISO 200. It also maintained a Low or better rating all the way up to ISO 1600.

Both the Fujifilm and Ricoh ship with versions of Silkypix RAW conversion software, and neither could hold a Low or better rating past ISO 400. If you plan to shoot RAW with a camera like this, the Coolpix A provides the simplest path to low-noise images with plenty of detail.

This Nikon easily earned an Excellent rating for color accuracy, as it did for Ricoh and Fujifilm. The Nikon Coolpix A came in behind those two, but all three models were able to yield fantastically accurate colors once white balance was set properly. Our test allows for a one-click white balance based on a neutral gray patch from our test target. We always suggest this for best color results. The Ricoh’s auto white balance wasn’t as good as the Nikon’s, even though it scored better in accuracy than the Nikon once this was corrected. For shooters that don’t want to mess with gray cards, the Nikon is probably the better choice, though the Fujifilm did well in this area, too, when compared with the Ricoh.

Not many cameras offer the level of image quality in a camera as small as this. Sony’s full-frame Cyber-shot RX1 obviously springs to mind, but that will do far more harm to your bank account.

In the Field
While we think the Fujifilm X100S is the most stylish camera in this class, we appreciate the Coolpix A’s understated charm. This camera feels solid, has a decent number of dedicated function buttons, two of which are assignable, and there’s even a small pop-up flash just in case you need it. Sadly, this flash can’t act as a wireless commander for other accessory flashes.

We were also a little disappointed to see that the functions assignable to the two Fn buttons are more limited than those you can assign to the Ricoh’s similar buttons. For instance, we found ourselves wanting to assign ISO to the Fn button on the front of the camera instead of the one on the back, for which it is the default function—but you can’t assign it to that front button. That meant that if we wanted a dedicated ISO button, it would have to be on the back—a silly limitation, in our view.

We would swap the playback and the exposure compensation buttons, too. It’s cumbersome enough to have to press the button and then turn a wheel to set exposure comp, as opposed to just using a simple rocker as you do on the Ricoh. It’s all the more annoying that we couldn’t reach the exposure comp button with our right hand, thus making this a two-hand operation. Sure, it’s good to keep two hands on the camera for stability, but sometimes you’re forced to shoot one-handed—and a compact should be conducive to this. We’re always perplexed when a simple design decision gets in the way of smart handling.

Though it is on the left side of the body, requiring your left hand, we applaud the inclusion of the focusing-mode switch on this compact. It provides consistency for Nikon DSLR shooters who are used to such a switch near the lensmount. Similar consistency is found in the well-ordered menu system, which looks very similar to the menus on the company’s DSLRs. And if you like to reverse the dials on your Nikon bodies, you can also do so with the Coolpix A.

When we first saw the power flip-switch that surrounds the shutter release, we grew concerned. We imagined ourselves errantly turning the Coolpix A on or off while shooting. However, in our field testing, we never encountered this problem.

In fact, we had very few problems of any kind when field testing. Video footage was among the best we’ve seen from a camera of this size. Burst shooting logged decent speed at 4 frames per second (not quite what we’d like for sports), and when shooting RAW + JPEG images, we captured 10 frames before the buffer filled.

If there was one area that left us less than pleased, it was with the focusing speed in macro mode. The camera was slow to focus for close-ups, which constitutes anything closer than 20 inches, and it tended to hunt a bit prior to achieving focus. Furthermore, dimly lit or low-contrast scenes left the Coolpix A flummoxed, whereas the Ricoh or Fujifilm managed to find focus, even if slowly.

The Bottom Line
Nikon shooters looking for a pocket camera should very seriously consider the Coolpix A. The similarity in controls, high image quality, and simple integration into your RAW workflow make it a no-brainer—as long as you can stomach its price tag. Mind you, it costs less than the Fujifilm and only slightly more than Sigma’s DP Merrill line of cameras, which are bulkier and, in our opinion, almost require a RAW workflow.

However, Ricoh’s GR undercuts the Coolpix A’s price by hundreds of dollars. For many people, this, along with the Ricoh’s wonderfully flexible control system, will be enough to win them over. For others, the classic styling and top-notch imaging of the Fujifilm X100S will lure them away.

Despite all of that, we think Nikon has found a nice middleground with this compact. A vast audience is already well-acquainted with Nikon’s most popular brand, and the Coolpix A offers very high performance and wonderful image quality in a camera that can go with you anywhere but underwater.

In the end, the Coolpix A might be just what most people want in a camera: small size and beautiful images.