Our 9 favorite Olympus cameras of all time

The Olympus camera brand is no more. To celebrate its legacy, we've chosen our all-time favorite models, from the film era to modern Micro Four Thirds. 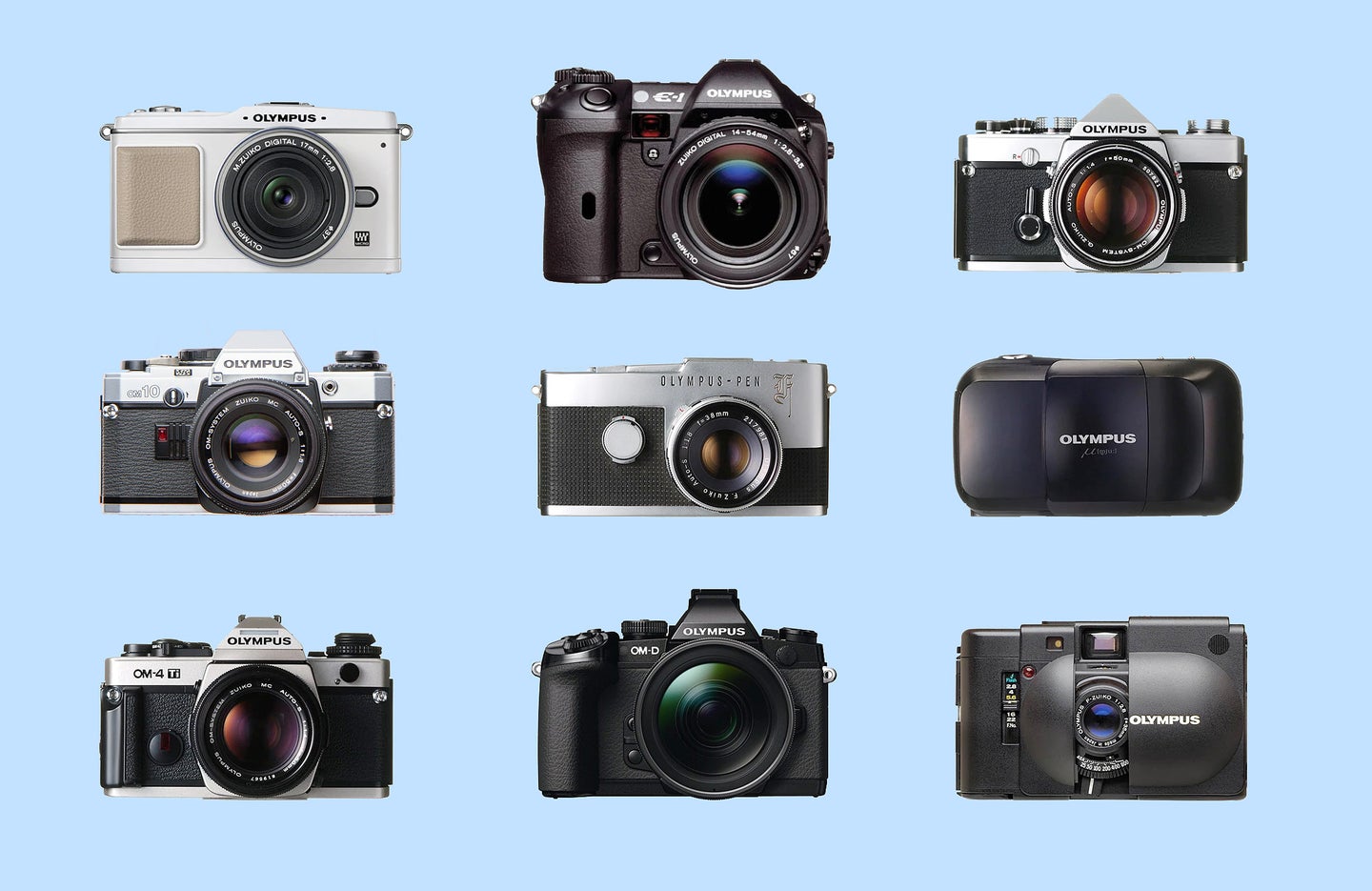 Earlier this week, Om Digital Solutions launched the OM System OM-1 Micro Four Thirds camera, the final camera ever to carry the Olympus badge. But wait, how did we get here? Last year, Olympus sold off its imaging division to Japan Industrial Partners, who then launched OM Digital Solutions with the intention of keeping the Olympus camera tradition alive.

And while we’re happy to see the DNA of the brand live on, this is a bittersweet moment. Olympus began manufacturing cameras all the way back in 1936 (one year before the first issue of Popular Photography magazine landed on newsstands). And in the time since, there have been countless Olympus cameras worth celebrating for their innovations and/or sheer awesomeness.

What follows are nine of our all-time favorite models, from the half-frame Pen F to the Micro Four Thirds OM-D E-M1.

Released in 1963, the original Pen F looks like something you’d expect to see Don Draper from Mad Men toss in his bag along with his booze stash. At the time, the Pen F was the smallest 35mm system camera, in large part because it only shoots frames that are half the size of a normal 35mm image. Load a 36-exposure roll of film into the camera and it will produce 72 vertically oriented photos that measure 24mm tall by 18mm wide.

There’s no pentaprism hump on top of the camera for a viewfinder. Instead, Olympus built a system of mirrors inside the camera in order to keep the top of the body flat. The original version requires two strokes of the advance lever in order to go to the next frame, similar to the original Leica M3. The Pen F feels old school because it is and that’s what we love about it. With film prices what they are now, we can also appreciate getting twice the frames per roll.

Pick up an original Olympus OM-1 from the early 1970s and you’ll quickly notice some subtle differences between it and some of the other popular film SLRs of the time. Both the aperture and shutter speed controls reside on the lens, so there’s no shutter dial on the compact, well-laid-out body.

Fire the shutter and you’ll also notice how quick and quiet the sound is. Olympus built an air damping system into the shutter mechanism to cushion the impact from the mirror box as it flips up and down every time you take a photo.

It even allows photographers to swap out the focusing screens through the lens mount, which means you don’t have to disassemble the camera to get a different view through the finder.

Scour the secondary market today and you’ll still find a ton of OM-1s out there, fully functional and ready to shoot, which is a testament to Olympus’s efforts to make a durable, compact, and relatively affordable camera that would last decades with just a little bit of TLC.

The Olympus XA is a compact, aperture priority-only film rangefinder that debuted in 1979. One of the stranger cameras in the Olympus catalog, it features an all-plastic design centered around a sharp 35mm f/2.8 lens paired with a 4-blade aperture. A sliding lens cover protects the camera when not in use and doubles as an on/off switch.

A vertical slider along the front of the body allows users to adjust the aperture—a needle display in the viewfinder shows the camera’s corresponding shutter speed. And a side-mounting flash unit adds to the XA’s versatility.  The only exposure override is a small lever on the bottom of the camera that adds +1.5EV to an exposure.

According to the brand, this was the first “full-featured” Olympus camera to make use of a mostly plastic construction. Still, these cameras are built tough and can easily be found in working condition, for not much coin, today.

In fact, they’re a great option for those seeking a tiny and robust, yet highly-cable manual focus camera. They’re also fantastic cameras for “shooting from the hip,” due to the unique design of the shutter release. But sausage fingers be warned, the controls can be a bit fiddly.

Off the shelf, the OM-10 is a fairly straightforward film SLR that, like the Nikon EM, only operates in aperture priority mode with a few exceptions for flash syncing and bulb exposures. A port on the front of the camera, however, allows users to attach a small dongle with a shutter speed dial that converts the camera into a full manual body.

It’s not quite as refined or durable as the single-digit OM bodies, but Olympus made a ton of these cameras, so you can still find them on the secondary market, today, for much cheaper than many of its more popular counterparts. We own several and have never paid more than $30 for one. Ultimately, it’s a clever little camera that deserves more credit than it got.

In 1989, Olympus released the last and most advanced version of the OM-series film SLRs. The OM-4Ti is lighter and more compact than the Leica M6. Plus, the OM-4Ti’s top and bottom plates utilized titanium (hence the name) to add durability and save weight.

Functionally, it feels a lot like the OM SLRs that came before it, but it had a few very notable upgrades. It was the first 35mm camera with a film plane shutter to sync with a flash, at any shutter speed.

You can still find OM-4TI bodies on the secondary market, but you can expect to pay a premium for them. The relatively high price is due in part to their rarity, but also due to the fact that they’re built for longevity. And hey, they’re still a lot cheaper than a Leica.

The Olympus Stylus/mju and its high-coveted younger sibling, the Stylus Epic/mju-II—also known as “the soap bar” for its unique shape— are pocketable, plastic, point-and-shoot film cameras sporting super-sharp 35mm lenses and straightforward functionality. The former features a 35mm f/3.5 lens, the latter a 35mm f/2.8.

Both of these cameras debuted in the 1990s. The original Stylus was a huge success, with over 5 million units manufactured. The Stylus Epic, which debuted in 1997, was also incredibly successful. And these days, both sell for a premium on the used market.

A sliding door acts both as an on/off switch and a lens cover. And both cameras offer a multitude of flash modes, reliable metering, and accurate autofocusing. Which is to say, they’re as easy to use as they are capable. No wonder you’ll find so analog-loving street and candid photographers working with them.

Back in 2003, Olympus kicked off its foray into DSLRs with a camera and lens system built specifically for digital photography. The sensor inside the Olympus E-1 was a Kodak-sourced CCD (which was common before CMOS came and made it obsolete) that measured 18mm x 13.5mm. Olympus stuck with that size, which was known as Four Thirds for the extent of its DSLR run during which it created some really excellent and compact lenses.

Even back then, Olympus emphasized toughness and durability in its cameras. The E-1’s magnesium alloy body came with burly weather sealing to help it survive in the wild. While the camera’s specs look ancient at this point, it was novel for the time and represented a big commitment from Olympus to its advanced digital offerings.

The Olympus PEN E-P1, announced in 2009, was named after the legendary Olympus Pen 35mm half-frame camera that debuted 50 years prior. It was also the first Olympus interchangeable lens camera to be compliant with the then-new Micro Four Thirds standard.

But it doesn’t just share a name with its distant 35mm relative, it also conveys a similar look, feel, and design to the classic Pen. The angular body is built from aluminum and features a 3-inch LCD on the back—there’s no viewfinder, but an optional optical finder was sold alongside it.

At the time of its launch, the E-P1 was one of only two Micro Four Thirds cameras on the market, offering a pleasant contrast to the Panasonic G1, an SLR-shaped camera with a built-in electronic viewfinder, and mostly plastic construction.

The E-P1’s 12-megapixel sensor was lauded in its day for punchy JPEGs and solid detail capture. And the camera as a whole was celebrated for its retro-tastic design, something Olympus would continue to lean into for future digital PEN models.

The OM-D E-M1 is arguably Olympus’ most important digital camera ever. Launched in 2013, this flagship Micro Four Thirds camera packs a highly-capable 16-megapixel sensor into a supremely compact and lightweight body with a tank-like construction—including robust dust and weather-sealing—and plenty of direct controls.

A comfortable camera to shoot with, the E-M1 also offered a sizable, high-resolution electronic viewfinder for it its time. And the camera’s 5-axis in-body image stabilization system was also at the top of the class for this era.

Now in its third iteration, the latest OM-D E-M1 Mark III hasn’t strayed far from the design and ethos of the original. In fact, the new flagship OM System OM-1 is essentially a distant sibling of the original E-M1. Moreover, the E-M1 is still a camera we’d gladly pick up and shoot with right now, despite its 9-year-old status.

Do you have a favorite Olympus camera we missed? Shout it out in the comments below.