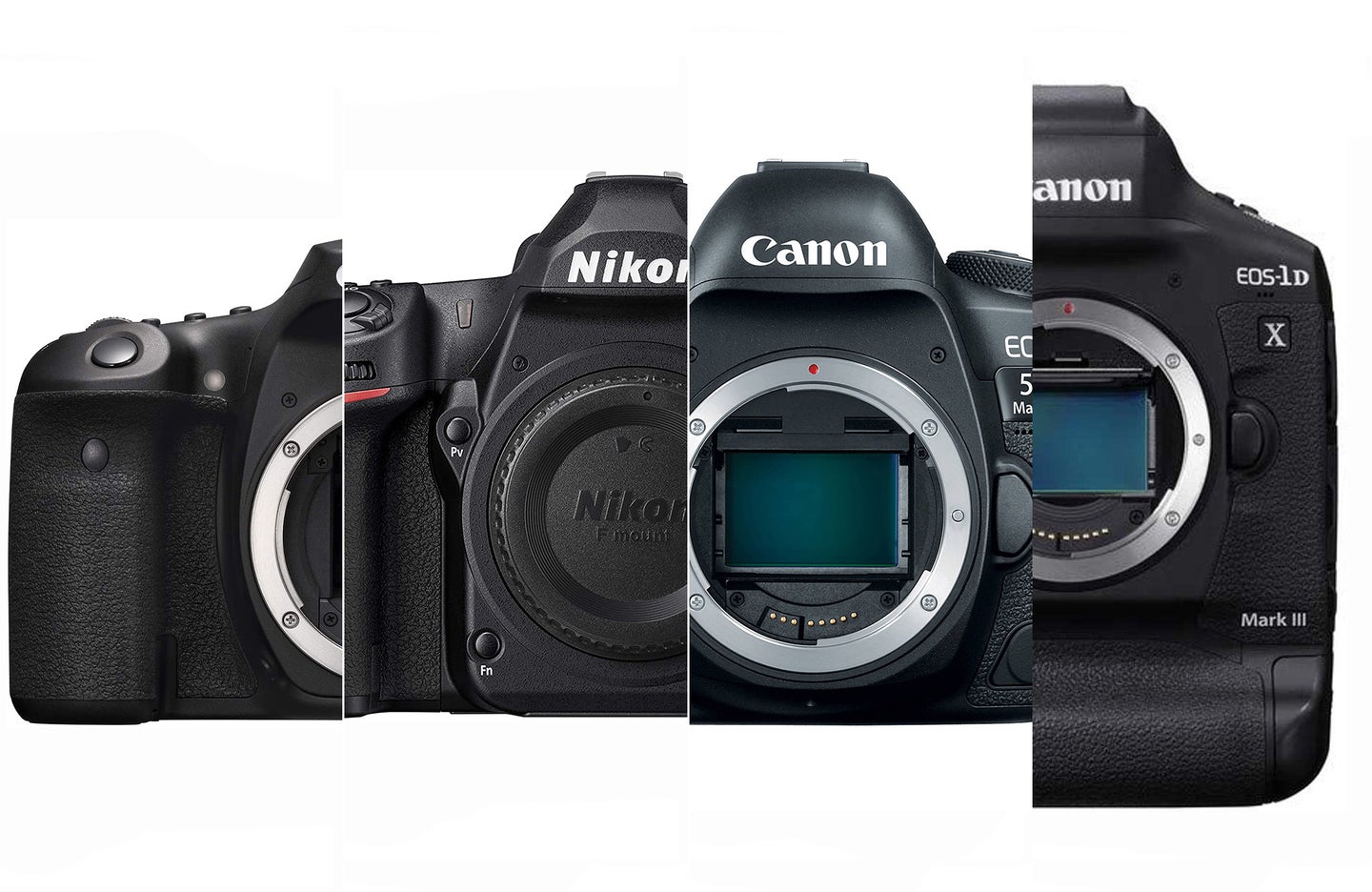 Beginner, professional, videographer, or somewhere in between: Here’s what you need to know when choosing a DSLR camera.

DSLRs have been the default for advanced cameras since the dawn of the digital age. While mirrorless cameras have come a long way and have largely replaced DSLRs in many regards, there are still some really excellent DSLR cameras out there on the market. DSLRs have access to huge catalogs of legacy lenses, many of which have gotten even more affordable as more people switch to mirrorless. DSLRs also still have a few actual advantages over mirrorless as well. For one, DSLRs still offer optical viewfinders, which causes zero lag, something mirrorless cameras can’t claim (at least not yet). We’ve rounded up this list of the best DSLR cameras still on the market, focusing on the features most photographers need while keeping them all inline with a reasonable budget.

How we picked the best DSLR cameras

The editors and writers at Popular Photography have been reviewing cameras for decades and we’ve had hands-on time with just about every major camera released in recent memory. This list is the result of hands-on testing, user feedback, spec comparison, and editorial reviews. We considered the entire current lineup from all of the major manufacturers to land on these picks. We focused on usability, feature set and budget to try and hone this list for specific users.

Features to consider when shopping for the best DSLR cameras

The perfect DSLR camera for you depends largely on the subject matter, your experience level, and your budget. We’ll walk you through the questions to ask—and the DSLR cameras we recommend, accordingly.

When it comes to a DSLR, your layout preference likely depends on your current skill level. More advanced photographers tend to prefer more tactile buttons so they can change settings quickly and easily without having to dive into an on-screen menu. For photographers just starting out, a bevy of buttons and dials can seem overwhelming. We tend to lean toward more buttons so photographers can grow into them. But, it’s most important that the camera feels comfortable to you.

It’s easy to just assume that full-frame cameras are the best, but opting for a smaller APS-C camera can have its advantages. A full-frame camera will typically give you better low-light performance and improved overall image quality. APS-C cameras, however, can be more compact thanks to their smaller sensors. APS-C cameras also get access to lenses built specifically for those smaller sensors. Those lenses often cost less than their full-frame counterparts, but they won’t cover the entire full-frame sensor if you decide to upgrade in the future. Some people are just fine staying with APS-C forever.

If you’re looking for more advanced video performance, you’re probably better off opting for one of Canon’s mirrorless options. Many of Canon’s DSLRs are still relatively capable, however, some of which offer 4K recording and advanced AF features during motion capture. For many DSLR shooters, video is relatively irrelevant, but these features can be a blast to learn if you’re willing to put in the work.

Most of Canon’s consumer-level DSLRs hover between 20 and 30 megapixels. There are some older models that go up beyond that, like the 5DS, but that model has gone out of production. Generally, anything over 16 megapixels will do you just fine for almost every purpose unless you want to make truly huge prints or crop very aggressively.

Looking at a camera’s maximum ISO range can be misleading. Some cameras promise ISO over 100,000, but will only be usable for a small fraction of that range. Don’t get dazzled by super high maximum numbers. Most DSLRs will max out around 4,000 for usable images, and even then, you should expect a ton of grain.

This category represents one of the big differentiators between high-end models and more consumer-oriented cameras. Pro bodies like the 5D Mark IV offer magnesium alloy shells that can take a beating. Cheaper models often rely on more plastic. More expensive cameras also have more safeguards against water and dust getting inside the body, so if you plan to use your camera for work or take it into a lot of challenging situations, pay extra and get something higher-end.

Why it made the cut: A solid mix of features and price make this a winner across the board.

Easy to use, comfortable to hold, with solid checkmarks in all the right boxes to consistently produce high-quality shots, the Canon EOS 90D DSLR is the all-around best DSLR camera pick. (It also has WiFi, Bluetooth, a moveable LED screen, and shoots 4K video.)

It’s not built for professionals, but it has all the settings a pro could need in a pinch. Still, it’s simple enough to use in its automatic modes that it’s easy to pick up and start shooting.

Why it made the cut: This compact, lightweight DSLR has built-in auto modes for beginners

If you are a committed Canon user (say, your friend has a stash of Canon lenses you can try out), check our budget option for an entry-level Canon.

Why it made the cut: This workhorse DSLRR is still ready for professional work for years to come.

The best DSLR for professional photographers is the Canon 5D Mark IV, a full-frame DSLR with rock-solid stats: 30.4 MP (with a beefy enough image processor to still shoot 7 frames per second), a native ISO of 32000 that expands to 102400, 61-point reticular autofocus, and dual-pixel recording in stills and video.

Despite all its heft, the Canon 5D Mark IV is still remarkably comfortable to use and carry, and for all its technical prowess, it remains an intuitive model, even if it is getting a little long in the tooth. A rotating screen would be nice, but the optical viewfinder is large and bright, which makes composing shots easy and comfortable. The super-rugged build quality also means it will be durable enough to endure pro work.

Why it made the cut: This full-frame camera shoots 4K video without cropping into the sensor like many other DSLRs do.

The Nikon D780 is the best DSLR camera for video. Its focus abilities (including two autofocus systems, and a focus-stacking mode to increase the depth of field), as well as its performance in low light, image processor, and overall image quality (it offers a 10-bit, versus 8-bit, option, which means that much more detail preserved), make this model a standout.

We also absolutely recommend the Canon 5D Mark IV, our pick for best camera for professional photography, as a 4K DSLR camera for video.

Why it made the cut: Canon’s flagship DSLR is a staple on the sidelines at pro sporting events thanks to it huge battery life, super-fast capture, and tons of physical controls.

The Canon 1D X Mark III won out over the Nikon D6 because of a few small factors, and one big one. The small: The Canon 1D X Mark III has a more hand-friendly button and wheel layout on the camera body, particularly the top, double the frames-per-second shooting speed in continuous mode, and a much larger buffer (1,000 frames vs 200 frames) for image processing. The big: The Nikon D6 does not begin to measure up on the video front, and at this level (and, to the dollar, same price point), that’s a major, limiting shortfall.

Why it made the cut: Canon’s entry-level DSLR offers manual controls and helpful shooting guides to accommodate every kind of photographer.

Starting out with a camera that’s too complex can get in the way of learning photography. Also, paying for features you’ll never use can soak up the photography budget you could otherwise dedicate toward lenses and accessories. We like the Canon EOS Rebel T7 for its durability and ease of use, as well as a solid assortment of features for the very-low-for-DSLR price. Plus, it readily upgrades with a new lens or two, which can then carry to another Canon camera body, should you choose.

Q: What is a DLSR camera?

If you’re wondering what is a DSLR camera in the first place, it stands for ‘digital single-lens reflex.’ Cameras in the DSLR category use a mirror that sits inside the camera body, between the back of the lens ahd the film plane and shutter. The mirror reflects the image coming in through the lens for the eye, and then flips up out of the way to let the light through the shutter and onto the digital sensor when the shutter button is pushed.

Q: Is a DSLR still worth buying?

Yes, a DSLR is still worth buying. While camera phones have improved drastically, you still have a smaller, inferior sensor on the phone (which no number of megapixels can counteract) and are stuck with one lens, among other limitations. Mirrorless cameras offer some advantages, but some shooters would still prefer an optical viewfinder over a digital one. For high-end applications like fast-action sports photography, DSLRs still have an edge when it comes to focus speed.

Q: What digital camera should I buy?

What digital camera you should buy depends on your primary goals and intended use (e.g., stills, video, or both?) and your budget. Overall, it’s worth going to the top end of your budget, as price really does reflect quality here—but do not forget to consider a lens budget, too, particularly if you are wanting to do any portrait photography, as kit lenses really fall short.

Q: How many megapixels is enough in a DSLR camera?

A camera’s megapixels (MP) are how many million pixels sensor has onboard to capture light. The MP number alone does not indicate quality, but rather how much information is gathered. So how many megapixels is enough in a DSLR depends on sensor size as well as how large you’ll print or scale the images—and your storage capacity (those high MP files take up a lot of space). Unless you’re doing ultra-large-scale work, 20 MP is going to be plenty and even less for an amateur user. For quality, focus on your lens, aperture setting, and sensor size/quality—particularly how it deals with light.

A final word on shopping for the best DSLR cameras

The best DSLR cameras are out there, and the more you know what you want from the camera, the easier it will be to choose.

Remember: You get what you pay for. And your skill can only do so much when up against an inferior camera. So while respecting your budget, if you want the best photos possible, go for the reach — and buy yourself time before you’ll need to upgrade.

And lenses, please remember to plan for lenses. If you want a great DSLR camera, you also need the right lens(es) for the job.