What is a mirrorless camera?

Mirrorless cameras often look like DSLRs but they have some technical differences and unique advantages. 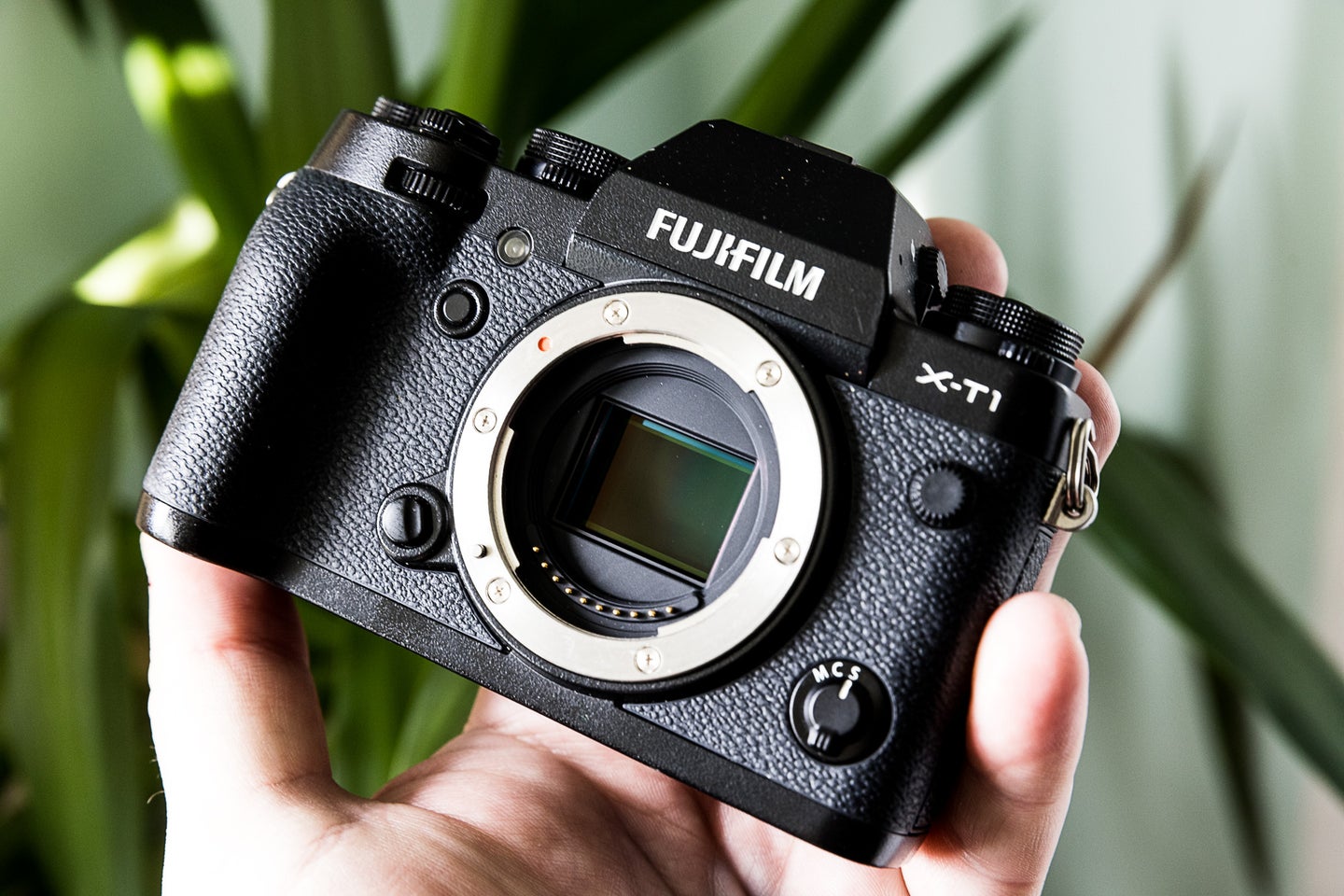 Even though it's several years old the Fujifilm X-T1 still holds its own. Stan Horaczek
SHARE

Take the lens off of a film SLR or a digital SLR and you’ll find yourself staring into a mirror. In fact, mirrors have been essential camera components for more than 150 years—that is, of course, until roughly the last decade. During that time, mirrorless cameras with interchangeable lenses have come onto the scene and eaten up huge chunks of DSLR market share thanks to promises of smaller cameras, superior autofocus tracking, and electronic viewfinders that allow you to see what your photo will look like before you press the button.

Which cameras actually had mirrors in them?

A camera like the Fujifilm X-Pro 3 is also a mirrorless camera, even though it uses a rangefinder-style design (and even old film-based rangefinders never relied on mirrors). It’s a little messy, but it gets simpler as you get accustomed to it.

Your smartphone camera doesn’t have a mirror in it, but most people wouldn’t call that a mirrorless camera because you can’t change the lenses. The same goes for compact cameras like the Fujifilm X100V, which has the same sensor as Fujifilm’s other mirrorless cameras, but has a permanently attached lens.

How do they work?

To understand the mirrorless moniker, we first have to understand how cameras with mirrors worked. SLRs (whether digital or film) place a tilted mirror behind the lens and in front of the shutter and film plane. That mirror reflects light up into the camera’s viewfinder, which uses more mirrors or a glass prism to redirect the image to your eye. This gives the shooter a real-time, analog view of the scene in front of the lens. When it’s time to take the picture, the mirror quickly flips up out of the way to expose the film before flipping back down to do it all again.

For a long time, this was the only real way photographers could get a true look at exactly what their camera sees through the lens. Early DSLRs didn’t offer digital live view because their imaging sensors simply couldn’t provide it. Eventually, as sensors improved and read-out got faster, those chips could provide real-time views of a scene and even handle the autofocus functionality. Some modern mirrorless cameras like the Sigma FP L rely solely on the camera’s rear-screen for composing and reviewing images. Many others, like the Canon R-series, Nikon Z-series, Sony A-series, Fujifilm X-series, and more, pump a live feed into an eye-level electronic viewfinder that tries to mimic what you’d get with a DSLR.

Both Canon and Nikon make first-party adapters so that their older lenses will work natively on their mirrorless cameras. In most cases, they work without any performance loss. The same isn’t true going the other way. Because of differences in the mounts, mirrorless lenses typically won’t attach to DSLRs, and they wouldn’t have a full range of focus even if they could.

How do mirrorless cameras focus?

What are the advantages of mirrorless cameras?

As stated above, mirrorless cameras excel when it comes to tracking subjects with focus. That’s especially true for people—many mirrorless cameras can hone in on a subject’s eye to ensure it’s sharp when you press the shutter. Canon and Sony have expanded that eye-tracking functionality to animals. As the cameras get smarter, they will inevitably learn to track even more types of objects. Canon recently announced that its upcoming R3 mirrorless flagship camera will be able to recognize and track cars to help with motorsports photography.

Because electronic viewfinders pull a live feed from the sensor, they can also show you how changing your settings will affect your final image. For instance, if you adjust the exposure compensation on your shot, you’ll actually be able to see the image get brighter in the viewfinder before you press the shutter. DSLRs can’t do that.

Shorter flange distances on lens mounts represent one of the unsung benefits of mirrorless cameras. It sounds nerdy, but because the lens mounts can be wider and sit closer to the sensor, lens makers can do some things that would have been difficult or impossible before. Consider a lens like Canon’s 28-70mm f/2. Sure, it’s chunky, but it’s also a full stop faster than any of the many 24-70mm lenses Canon and other manufacturers have offered in recent years.

Speaking of chunkiness, mirrorless cameras can be smaller than their DSLR counterparts because they don’t need room inside their bodies for a flapping mirror. While there is a size advantage to an extent, it’s not usually a profound reduction. Still, if you’re carrying around a camera for a 12-hour wedding, a couple ounces can make a big difference.

What are the disadvantages?

Because mirrorless cameras rely heavily on electronic screens, they tend to get less battery life out of a charge than DSLRs. The difference, however, really depends on your usage. If you’re primarily using the smaller viewfinder screen over the larger rear screen, it will save you some juice.

There is also at least a little lag in the electronic viewfinder, though it has gotten much less pronounced over the years. Current-gen mirrorless cameras are so snappy that you likely won’t notice much lag at all. When you get into dark situations, however, the viewfinder will try to brighten up the scene so you can see what you’re doing. That typically involves employing longer shutter speeds, which can make everything look smeary as you move the camera. This is one reason some shooters still prefer DSLRs for things like sports or dark wedding receptions.

What are some of the best mirrorless cameras?

Right now, the Sony A1 is the king of the mirrorless camera landscape. It captures 50-megapixel photos at a super-high burst rate with an impeccable AF system all for the pros-only price of $6,500. Both Canon and Nikon are working on high-end mirrorless cameras to compete with the Sony A1 in terms of specs. Expect to see those before the Olympics start.

The Canon EOS R5 is cheaper than the Sony A1 at $3,899 and offers 45-megapixel images with almost-as-fast burst rates. While you shouldn’t be wooed by its promises of 8K video, the Canon EOS R5 is one of the best all-around cameras ever made. It competes directly with the Sony A7 Mark IV, which has an even higher-res 61-megapixel sensor.

Peruse the Nikon mirrorless lineup and you’ll find the Z7 II at the top of the heap. Like the Canon R5, it offers a 45-megapixel sensor, a powerful image processor, and dual card slots for $3,000. The 24.5-megapixel Z6 II offers smaller file sizes and a more affordable starting price of $2,000. For just $1,000, Nikon still sells the Z5, which crams a full-frame sensor into a small body.

Panasonic made the leap to full-frame mirrorless back in 2019, and its S1-series cameras offer some of the most advanced video features in the space. The cameras are a bit bulky, but their excellent performance makes up for it, especially when it comes to shooting motion.

Fujifilm has two excellent lines of mirrorless cameras with different sensor sizes. The GFX medium format cameras command high prices, but they offer medium-format sensors, which are even larger than the full-frame chips typically found in pro cameras. That translates into excellent image quality and depth of field effects smaller cameras can’t provide.

The X-series represents Fujifilm’s smaller sensor APS-C line, which is full of rugged cameras with excellent designs that make them appealing to pros. The $2,000 X-Pro3 has a rangefinder-style design, while the $1,700 X-T4 looks more like a DSLR. The X-series also offers some excellent entry-level models like the X-E3, which provides an impressive set of features for a $700 camera.