How do I know if a lens will fit my camera?

Lens mounts can be confusing. Here's how to get the right glass for your camera. 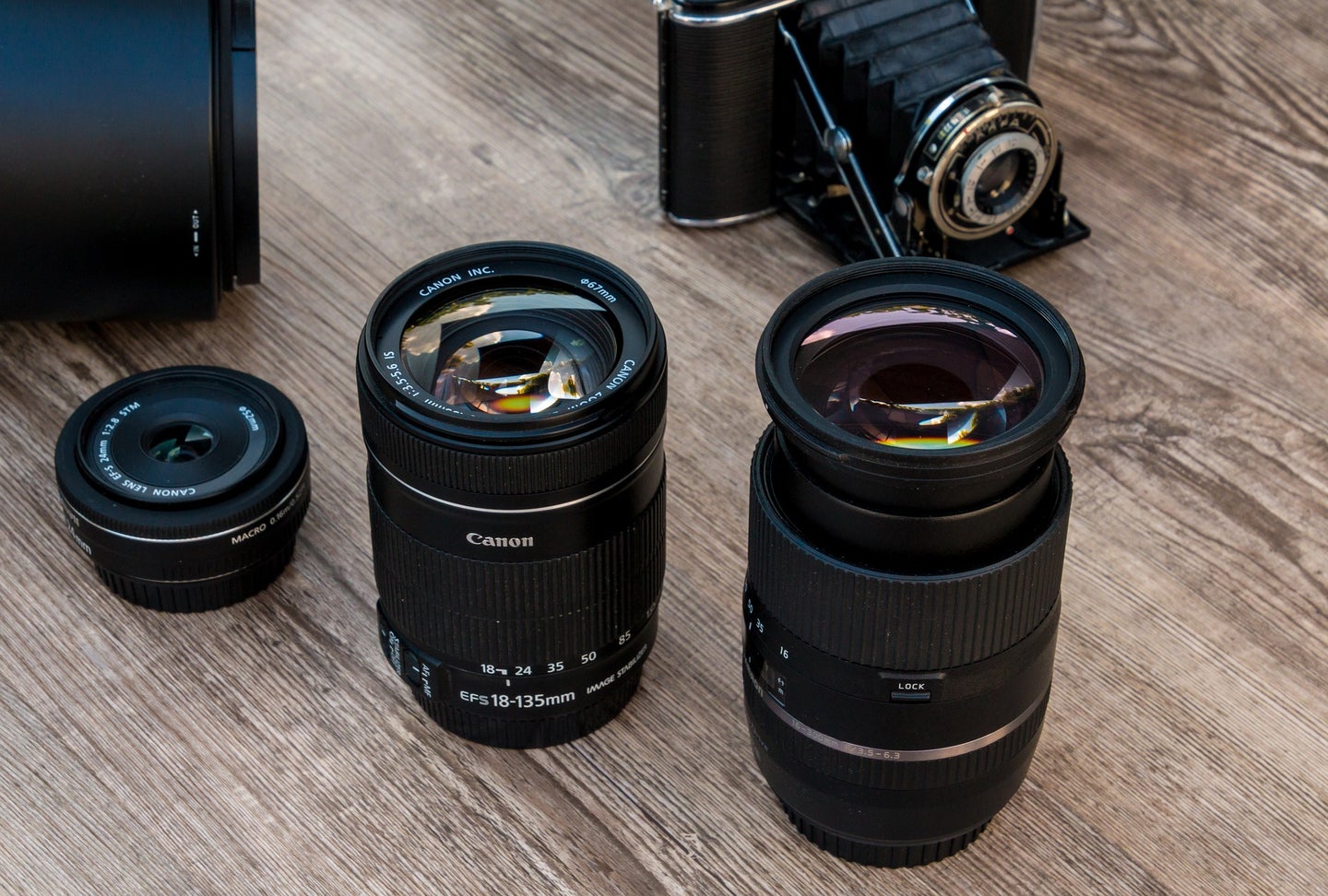 Will these fit your camera? Here's how to tell. Pixabay
SHARE

Choosing your first interchangeable lens camera is a big leap in the photography world. Once you pick a brand and a camera type, you’ll need to buy lenses specifically to fit it. New glass isn’t cheap and it’s easy to get hooked wanting to buy it. That kit lens that comes with the camera is great to start, but what happens when you want a super-sharp prime with buttery blur or a long telephoto lens to capture distant objects? You plunk down the credit card. Before you go making a wish list of lenses, however, it’s important to make sure that glass will actually fit the camera you have. Even lenses from the same company that made your mirrorless camera or DSLR may not work with your camera body. In order to ensure compatibility, you need to dig into the complicated, acronym-laden world of the lens mount.

What is a lens mount?

The junction where your camera meets the lens is called the mount. Every major company (with a few exceptions) uses its own proprietary mount. So, if you want to use a lens on your Canon camera, you’ll have to buy a Canon lens, or buy a lens from a third party company that makes models in that specific mount. Sigma, Tamron, and Tokina represent some of the largest third-party lens makers who make optics for a wide range of camera models.

Up until a few years ago, DSLRs dominated the interchangeable-lens camera market. In DSLRs, the lens mount sits relatively far from the sensor to make room for a mirror that flips up and down so shooters can see through the viewfinder. The more recent mirrorless cameras, however, don’t need a mirror box, which means the lens can sit much closer to the sensor. You don’t need to know the technical details of the mismatch, but there are real world repercussions.

It’s very simple to adapt DSLR lenses to a mirrorless camera. It’s difficult (and often impossible) to go in the other direction. For instance, a simple adapter lets Canon shooters put their older EF lenses (meant for DSLRs) onto its R-series mirrorless bodies without almost no penalty in performance. Try putting a native mirrorless RF lens on a DSLR, however, and you’ll find it impossible. Even if you could find a way to get the lens mounted, its close proximity to the sensor would seriously limit the range in which it could focus.

Not every lens creates a big enough image circle to cover every sensor. You’ll typically find two sensor sizes when it comes to interchangeable-lens cameras: full-frame and APS-C. The former is the same size as an image shot on 35mm film, while the latter is roughly 25 percent smaller.

Full-frame lenses will work just fine on cameras with smaller sensors, but you’ll notice that the image looks zoomed-in compared to what you’d get with a full-frame camera. That’s because the smaller sensor is literally capturing a smaller portion of the lens’s image circle. It’s like cropping in real time.

For example, if you have a 50mm lens with a full-frame image circle, you can mount it to an APS-C lens, but it will appear as though you’re using a 75mm lens. It will look like you literally zoomed in.

While this can be confusing, it does offer lens makers some benefits. Lenses that don’t need to create large image circles can be smaller and cheaper than their full-frame counterparts. If you ever upgrade your camera body to a full-frame model, they typically allow you to shoot with those APS-C lenses, but you’ll get a reduced resolution and a more zoomed-in look.

If you’re looking for specific lenses to fit your camera, you’ll have to understand exactly what you’re looking at. Here’s a top-level overview of most of the common mounts.

This was Canon’s dominant format for decades while SLRs and DSLRs dominated. This will work on any Canon autofocus film SLR, any Canon DSLR (regardless of sensor size), and Canon mirrorless cameras with help from an adapter.

These lenses fit the same exact cameras as the EF mount, but they create a smaller image circle, which means they’re only fully compatible with APS-C cameras like the 90D.

This is Canon’s full-frame mirrorless mount. Lenses with this designation will fit any R-series mirrorless camera and won’t work with anything else outside that line. Canon is currently expanding this line aggressively, so this is likely the best place to invest for the future.

It’s easy to forget about Canon’s line of APS-C sensor mirrorless cameras. They use this mount, however, the list of native lenses is relatively limited. There are less than a dozen. There is a full-featured adapter, however, that allows for use of EF lenses on the EF-M cameras.

Nikon first developed the F mount in the late 1950s and still uses the same basic attachment system even since. That’s still true for its DSLRs, which use the F mount. Nikon’s lens compatibility gets a little complicated beyond the simple mount, however. The company offers several types of lenses that work with specific types of cameras. The company has a solid explainer on its site to explain the broad compatibility issues.

Generally, however, you can get many old lenses to work on current Nikon camera bodies, often without an adapter.

Nikon’s full-frame mirrorless cameras use the Z-mount, which is similar to Canon’s RF mount. Native Z lenses won’t work on DSLRs for the same design reasons explained above with the Canon gear.

Sony only just recently discontinued its A-mount DSLRs, which means there will likely be no more bodies that support this mount natively. This mount was around from before the mirrorless cameras debuted. It uses technology that Sony acquired from Konica-Minolta, so some old Minolta lenses will work with it without an adapter. A-mount lenses will also work with Sony mirrorless cameras with help from some first-party adapters made by Sony.

This is Sony’s full-frame mirrorless lens mount. Buying a lens with an FE designation means it will work with full-frame cameras like the mighty A1 or the more basic A7. It will also work on cameras with smaller sensors like the A6600, but you’ll capture a smaller amount of the image circle and get a zoomed in angle of view.

If you have a camera with an FE mount, it’s simple to adapt older A-mount glass and still maintain full features, including autofocus.

Sony started its mirrorless journey with APS-C cameras and that’s what this mount is for. You’ll sometimes see E and FE used interchangeably when talking about lens mounts, so make sure you’re getting full-frame coverage if you have a full-frame body. E mount lenses are often smaller and cheaper than their FE siblings because they don’t need to make as big of an image. If you have a full-frame camera, you can often attach an E-mount lens and use it in crop mode. You’ll get less resolution, but it’s handy if you have a high-quality E-mount lens you want to keep using after an upgrade.

Fujifilm’s GFX cameras actually employ sensors that are bigger than the typical full-frame chips we’ve talked about so far. People typically refer to this sensor size as “medium format.” Because these lenses need to create large lens circles, they’re often larger, heavier, and more expensive. They’re also only compatible with GFX cameras like the 100-megapixel GFX100S or the rangefinder style GFX 50R.

Skipping straight over full-frame, Fujifilm’s bread-and-butter mount only covers APS-C sensors like those found in its X-Pro3 or X-T4. Despite the smaller sensor size, the X lenses are extremely well-made and create some truly impressive images.

If you’re willing to dig into the world of adapters, X-mount cameras are also particularly good at supporting vintage lenses meant for film cameras.

Like Nikon, Pentax has stayed relatively consistent with its DSLR camera lens mount for decades. The FA mount lenses will fit full-frame DSLRs like the K-1 Mark II. There aren’t a ton of full-frame-specific DSLR lenses in the Pentax lineup because the company concentrated heavily on APS-C models for years before diving into full-frame.

Pentax’s APS-C lineup is decidedly more robust because it simply had more time to develop. You can, of course, still use FA lenses on DA bodies, just expect to get a zoomed-in look.

While most companies opt for their own proprietary fit, Panasonic, Olympus, and other  companies like Black Magic have embraced the standardized Micro Four-Thirds format. These lenses cover sensors that are half the size of a full-frame chip. So, if you look through a 50mm lens on a Micro Four-Thirds camera, you’ll see what you’d expect from a 100mm lens on a full-frame camera. This can make it more challenging to get wide-angle coverage.

The nice part about a mount like Micro Four-Thirds: It makes lenses interchangeable between brands. For instance, you can use Olympus lenses on Panasonic camera bodies and vice versa.

What about third party lens makers?

It can be confusing when a lens doesn’t share a brand with your camera itself. But, makers like Sigma, Tamron, and Tokina churn out really excellent glass, which is often cheaper than first-party options.

If you’re going to buy a third-party lens, you just want to make sure that the lens works for both your camera’s mount and the sensor size. Refer to the chart above or do some research on the web if you’re unsure.

Remember that lenses are an investment

While it can take a little research to fully understand how lens mounts work, it’s worth buying the best glass you can. Lenses typically outlast camera bodies by a longshot, so there’s a good chance you’ll want to use your current glass with your new body whenever its time to upgrade.