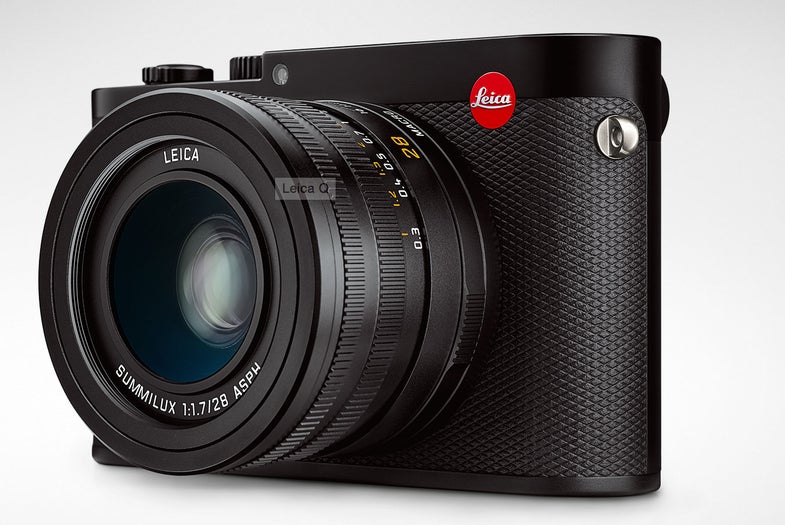 When Sony first unleashed the full-frame RX1 a few years ago, it was a huge deal. They managed to mash a big beautiful sensor into a tiny little body with a very sharp fixed lens, all of which could almost literally fit in a pocket. Since then, all has been quiet on the full-frame compact front. Now, Leica has announced their version called the Q, and it seems pretty impressive.

In short, Leica seems to have aimed to put many of the features of their iconic M-series cameras into a compact. It has a 24-megapixel full-frame CMOS sensor, as well as a fixed 28mm F/1.7 prime lens. That would be a pretty common set up for a typical Leica shooter. The body is built from metal and feels like a tank.

From what we have seen out of the lens so far, it’s on-par with what we have come to expect out of Leica, which is to say that it’s sharp and bright. Unlike the M-series, the Q is an autofocus camera, which actually makes it a lot more appealing for me, since I’m terrible at focusing manually. That sounds trite, but there are tons of shooters like me who have spent countless hours mastering the art of the autofocus.

Rather than using a true rangefinder system, the Q uses a familiar electronic viewfinder, which has a resolution of 3.68-million dots. That will feel like a big departure for M purists, but will feel very familiar to those coming from other mirrorless camera systems.

There’s a built-in hot shoe for attaching a flash and it focuses down to about six inches, which is nice and close.

While some of Leica’s more consumer-oriented offerings have seemed like a bit of a novelty, this thing actually feels like something that’s meant for real photography. They didn’t try anything crazy with the styling, but rather they stuck with the aesthetics and ergonomics that have created so many die-hard fans through the years.

Of course, there is some real competition out there for this camera. The much-loved Fujifilm X100T costs less than a third the price of the Q with the drawback of an APS-C sensor and a slightly tighter 35mm equivalent lens. Since the Q is still too big to fit in a pocket, it also has to consider cameras like the Sony A7 II in its competitive set. An A7 II body and a 28mm F/2 lens will save you roughly $2,000 and give you the option of interchangeable lenses.

So, while it will take its lumps in the comment sections for being too expensive or “a novelty,” I really like this direction from Leica. They have made something that’s truly designed to make great photographs. We’re interested to see how it holds up in terms of image quality when it hits our lab, so check back in a few weeks for a full test.