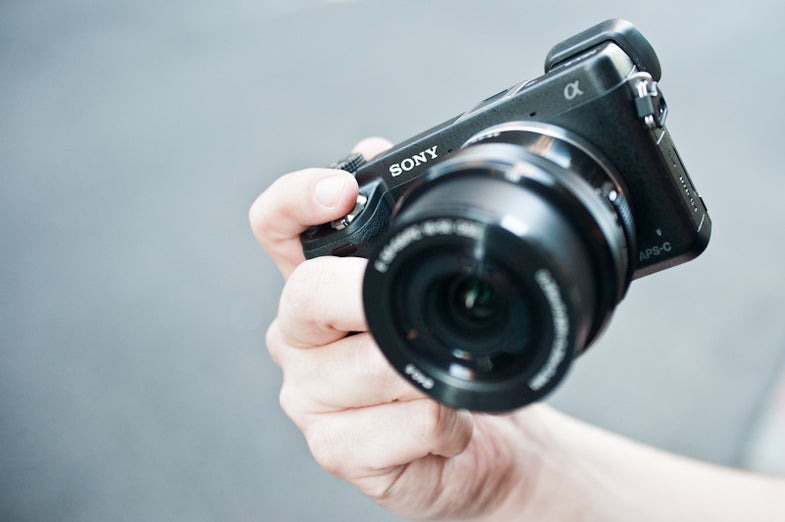 The NEX-5N is just a few weeks old, but now there’s even another addition to the NEX family in the form of the NEX-6.

One of the first things you’ll notice when picking it up is that it has a built-in electronic viewfinder. It’s the same OLED Tru-Finder that resides in the NEX-7. It has a resolution of 2.36 million dots and covers 100% of the frame.

Unlike the rest of Sony’s announcements tonight, the NEX-6 doesn’t have a full-frame sensor, but rather a 16.1-megapixel APS-HD CMOS sensor. While it doesn’t have the same amount of real estate or resolution as its bigger siblings, it does have 99 phase-detection AF points on the image sensor as part of the Fast Hybrid AF system. It’s not all that different to the system found in Canon’s EOS-M or Nikons 1-series.

From a build standpoint, the camera is small, but has a more defined grip than other NEX cameras in the past. It also has a mode dial on the top, like a DSLR, to make switching shooting modes more efficient. The “Function” key has also made its way over from the Alpha cameras to give the NEX a bit more customizability.

As with the NEX-5R, the NEX-6 has WiFi on board and plays nice with Sony’s PlayMemories Camera Apps platform. It won’t give you Instagram access like Samsung or NIkon, but it will actually let you add new functionality to the camera using apps, which is pretty handy.

The screen is a 3.0-inch LCD that can tilts up and down. It can go 90-degrees up or 45-degrees down, which means it won’t flip all the way for self-portraits like the screen on the NEX-F3.

In addition to the body, Sony is also announcing three new lenses. The first is a 16-50mm F/3.5-5.6 powered zoom that squashes down to just under 30mm thick when powered off. It has built-in OSS and has a pair of rings that operate differently depending on your focus mode.

The other is an 18mm F/1.8 that gives a full-frame equivalent field of view you’d expect from a 35mm lens. It also has built in OSS.

The last new lens is a 10-18 super-wide-angle zoom lens with a maximum aperture of F/4. It has built-in OSS and uses Extra-low Dispersion glass to help fight off distortion that can be common in extra-wide lenses like this one.

At first look, it seems like the NEX-6 does a good job filling a gap in the NEX lineup between the NEX-5N and the much pricier NEX-7.