After a long break, Canon is back in the tough compact competition 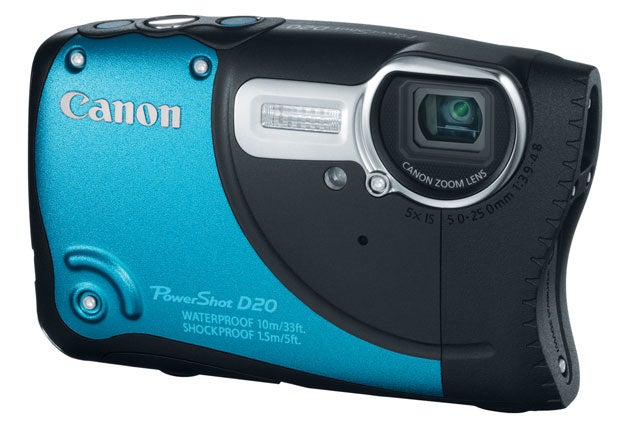 The last time we saw a rugged camera from Canon, it was the blimp-like D10, which was actually a very solid little compact. But, the tough camera market is growing, drawing even Nikon into the fray, which is why we’re glad to see Canon updating their rugged offering.

The D20 is waterproof to 33-feet and shock-proof from a height of about five-feet, which isn’t quite as burly as some others that can handle a drop from 6.6-feet. It has a 5X optical zoom lens with a maximum aperture that goes from F/3.9 to F/4.8. We would always love to see faster glass in cameras like this to help get sharper shots during fast action, but lens’s tight living arrangements make that a real challenge. The optical IS also helps a bit to make up for it.

Inside, it uses Canon’s HD system, which includes a 12.1-megapixel, high-sensitivity CMOS sensor and the Digic 4 processor, which makes it capable of 1920 x 1080 video capture. Like most current rugged cameras, it has built-in GPS, but we’re hoping it’s easer on the battery than it is in the otherwise-awesome PowerShot S100.

As you can see from the photo, Canon has changed up the design a bit. Personally think it looks a lot better, but, it’s not just about aesthetics. The bright body color makes it easy to find in case you drop it and the high-contrast buttons look fairly simple to navigate, even in limited visibility. They’re complemented by a 3-inch LCD screen for composition and review.

Canon has also built in a few underwater-specific features, including an underwater macro mode for capturing details when swimming or diving.

The expected ship date is in May 2012, at which point it will command $349, which puts it in a very competitive position with the rest of the market. I love rugged cameras, so I’m excited to get my hands on one and find out just how tough it is.