How to safely use smoke bombs in portraits

Add some smoke to your next portrait for a whimsical feeling. 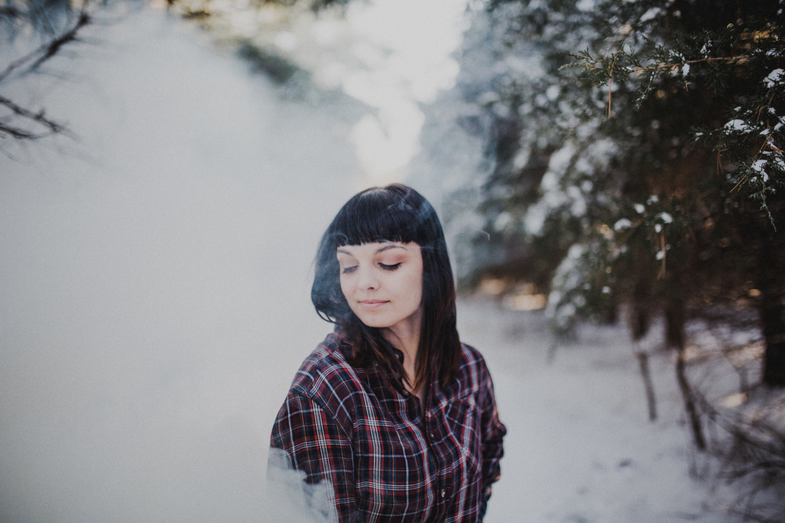 The white haze left behind from the smoke bomb creates a nice contrast with the subject's dark hair. Aaron and Whitney DuRall
SHARE

Aaron and Whitney DuRall are a husband and wife photography team based out of New York City who specializes in shooting engagements and weddings. Occasionally they will add the power of smoke to their awesome portraits. Read on to find out more about how to safely execute your own smoke bomb portrait.

Why would anyone want to use smoke bombs in a shoot?

Simply put, it’s pretty dang cool. They provide a fun and unique aesthetic that can add life to any session. Whether it’s with a couple, a model, a band, whatever, the addition of colorful plumes and the subsequent haze they leave can give any shoot an extra kick of interest. However, people should understand that using smoke bombs can potentially pose a few risks. It is paramount that these risks are openly discussed and understood by all parties involved before using them in a shoot. This is especially true if one intends to hold them in their hands. Use our guide to help get you started.

Safety concerns while using smoke bombs in your photoshoot:

Although smoke bombs can provide an interesting pop of color to a portrait it’s important to proceed with caution. The primary concerns when shooting with smoke bombs are explosions, burns, stains, fire, and inhalation/smell. More of each of these below.

Explosions We recommend everyone use cool burning smoke bombs, but due to these risks, but we also understand they are not always available. While it is unlikely that a smoke bomb will explode, it can happen. This is possible when too much moister gets inside the tube, thus clogging the pathway for the smoke’s expulsion. When this happens, it can cause a smoke bomb to combust. There is a way to tell if your smoke bomb could potentially have this issue. If it fails to emit plumes shortly after the fuse has burnt, this could indicate that there is a clogging issue relating to moisture inside the cylinder. In the event this happens, move away from the smoke bomb and allow it to burn itself out.

Burns: unless you’re using a cool burning smoke bomb, they will get hot. It is advised not to hold them and one understands they do so at their own risk. If you choose to hold them, place your hand as low to the base as possible. They burn top to bottom and the base will be the coolest spot.

Stains: If you’re using colorful smoke, just know that if the smoke is directly and closely emitted to clothing, it can leave a stain. You may want to ask your subjects to wear dark colors just in case.

Inhalation/Smell: The smoke is often very thick and can irritate the eyes and throat of some people. I personally have no issue with this, however, they tend to aggravate Whit’s throat if she manages to inhale some of the smoke as it flows around her. The smell of the smoke can also stay in your hair and clothes.

How to create a smoke bomb portrait:

When we use smoke bombs, we use them for the color they provide. We love the haze that surrounds our subjects and the billowing plumes. There will be days that it’s advised not to use them. Like briefly mentioned above, it’s always important to use these away from anything that’s overly flammable, or anything that is too dry. So we’d recommend not using them during the dry months of summer if you aren’t immediately near water. It only takes a single spark to cause a big fire, so please keep that in mind. Wind is the enemy with smoke bombs always. If it’s an incredibly windy day, pack them up, and save them for later. They will prove mostly useless since the wind will quickly disperse any plumes and/or haze.

Smoke bombs can really work in a variety of situations when it comes to shoots. There are no rules. We actually travel with a bunch in the trunk of our car on any given day. We do this because we never know when we may want to hop out of the car, and pop off a few frames using them. We also never know when we may want to incorporate them into an engagement session, a wedding day, or even a lifestyle session and more. Whether having a subject stay still as we run circles around them, engulfing them in smoke, or whether they run around holding the bomb themselves, like I said, there are no rules.

Where to buy smoke bombs for a photo shoot

Now, people always ask where do we get our smoke bombs? Well, it depends. We love Enola Gaye Smoke Grenades because, again, they are cool burning with a wire pull system. They are pricey, but well worth it. Availability also depends on where in the United States that you live. When we were living in the Missouri, it was very easy for us to get them, as there were fireworks warehouses all over the state. From Black Cat markets, to Pyro City, to Fireworks Supermarket and more, there are places all over to buy smoke bombs. However, one should know that most often, they will not find cool burning smoke bombs at these places. They do occasionally have them, but not all of the time. This is where the risks stated above need to be given thorough attention and consideration since they will be fused and hot burning.

This article originally appeared on Aaron and Whitney’s personal blog.