Check out our review of the Tamron 85mm lens 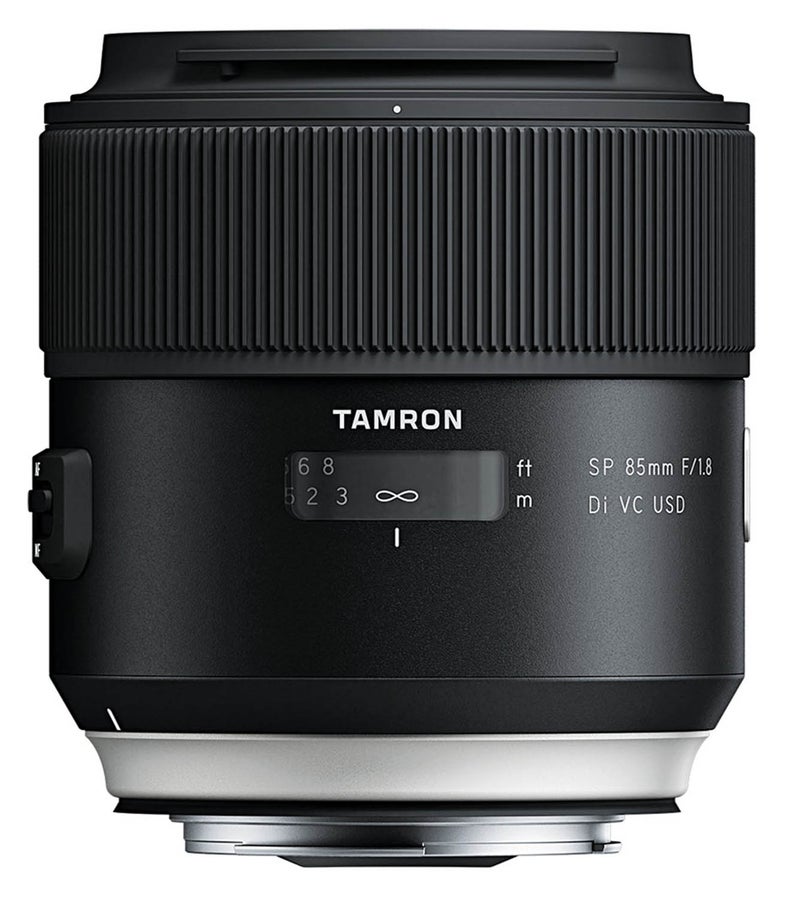 What's Hot: 3-stop Vibration Compensation What's Not: Longer and heavier than most 85mm glass Who It's For: Canon, Nikon, and Sony A-mount shooters who want more handheld versatility.
SHARE

Back in April 2011 we ran a feature story on 85mm lenses titled “One Perfect Lens.” We called the 85mm (with a maximum aperture of f/1.8, f/1.4, or f/1.2) a photographer’s most versatile lens: Its fast speed freezes action for sports; the telephoto focal length makes it perfect for portraits; its wide-open aperture makes it great for capturing in low light. So what could be more perfect than a fast 85mm? You guessed it—an 85mm with image stabilization. And this new $749 (street) Tamron SP 85mm f/1.8 Di VC USD lens is the first 85mm f/1.8 full-framer to have it.

The Tamron 85mm lens has 13 elements in 9 groups, including one LD (low dispersion) and XLD (extra low dispersion) element to combat chromatic aberrations. A fluorine coating on the front element and moisture-resistant construction throughout help protect the optics. You can update firmware, calibrate autofocus, and adjust your preferences using Tamron’s new TAP-in Console, an optional accessory similar to Sigma’s USB Dock. It’s a handy option to have if you want to modify your lens without sending it out for service.

Even though this is an f/1.8, its build feels more like a typical f/1.4. At 3.67 inches long, it’s longer than comparable 85mm f/1.8 glass from Canon and Nikon and slightly longer than most of the 85mm f/1.4 lenses on the market; it weighs in at 1.63 pounds, 0.5 pounds more than the Canon f/1.8 and 0.85 pound more than the Nikon. Its focusing ring, at almost an inch wide, is easy to grip, making manual focusing more enjoyable.

Given the utility of a fast 85, the Tamron 85mm lens has a huge set of competitors—both recent and, like Canon’s f/1.8, fairly old (we tested that one back in 1993). Most of those we’ve tested are f/1.4s: from Nikon, Rokinon, Sigma, Sony, and Zeiss (including both the Milvus and Otus).

In the Popular Photography Test Lab, our SQF tests for sharpness and contrast showed Excellent results, an A+ at our 11×14-inch benchmark size, slightly better than the Canon f/1.8 old timer and the more recent (2012) Nikon f/1.8. In our tests of distortion control using DxO Analyzer 6.1, the Tamron came out with Imperceptible pincushion distortion (0.02%) a fantastic result—slightly better than the Nikon f/1.8 (0.05%) and three of the f/1.4s, and tied with the Sigma and Zeiss f/1.4s.

The Tamron 85mm’s total lack of vignetting proved a surprise; the Canon f/1.8 showed light falloff until f/4 and the Nikon f/1.8 until f/2.5. It even outperformed the expensive Zeiss Milvus and Otus 85mm f/1.4 lenses in this test. Its closest focusing distance, at 29.62 inches, was similar to the Nikon f/1.8 and slightly better than all of the f/1.4 lenses. And with a maximum magnification ratio of 1:6.22, the Tamron also beat both the Canon (1:8) and Nikon (1:6.8).

Then there’s the unique stabilization system. Our tests gained an average of 3 stops in handheld shooting, a very nice result indeed.

Tamron was the first manufacturer to put stabilization in an 85mm lens, and it’s a roaring success. The optics were not compromised at all, and in the case of vignetting this lens beat all of its rivals. Although the other f/1.8 lenses sell for less, this one competes very well with f/1.4 glass and its street price of $749 seems quite reasonable given the addition of stabilization. It seems Tamron is becoming a leader in lens evolution.

*Tested measurement not available due to instrument limitations.