The Sony A1 is the most powerful mirrorless camera on the market right now. 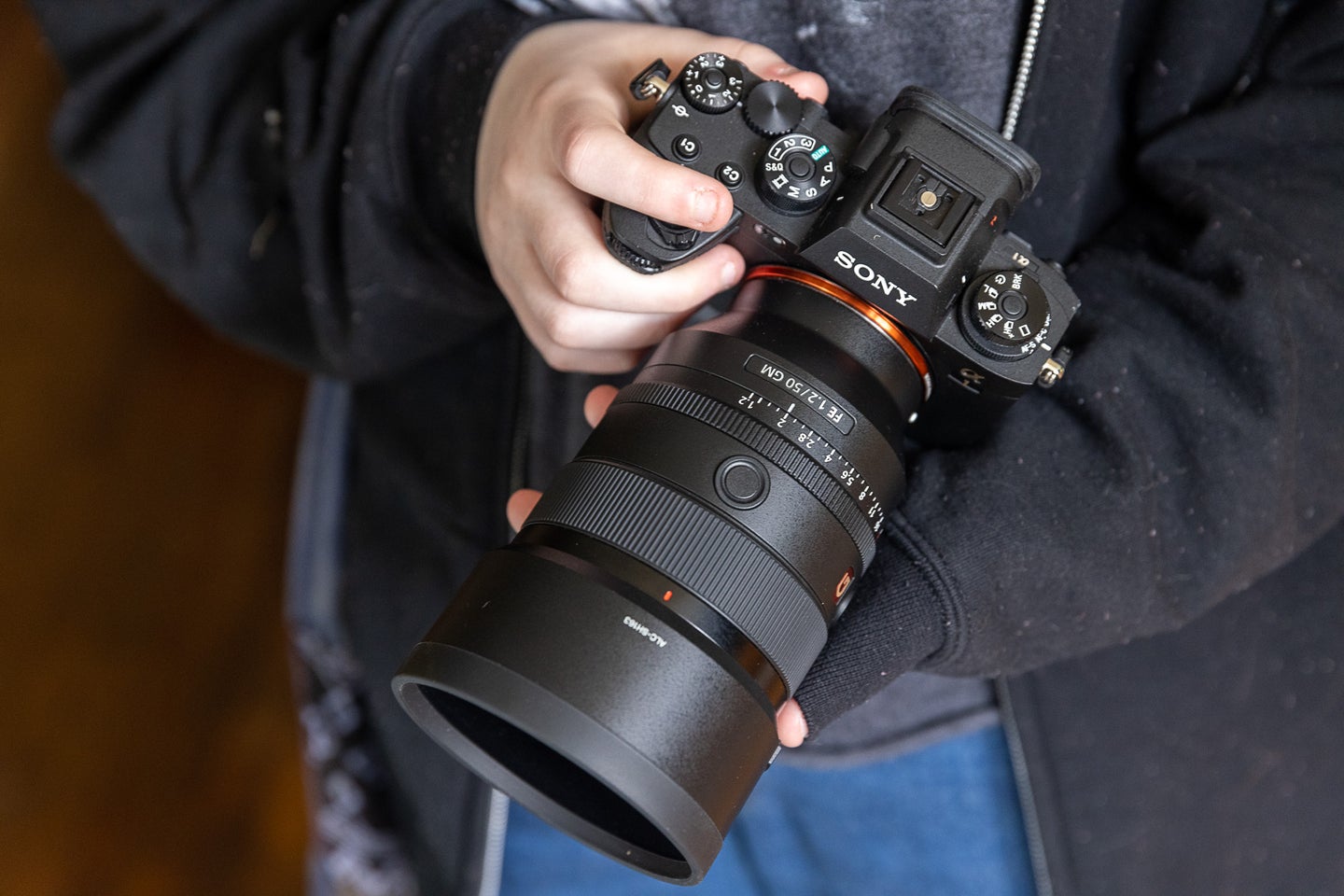 The Sony A1 is the most powerful camera on the market at the moment. Stan Horaczek
SHARE

To borrow a phrase from 2019 internet slang, the Sony A1 camera is “extra.” Scan down its spec list, and you’ll notice that Sony has pushed its flagship camera just a little more than you might expect in almost every single category. Compared to its competition, it has faster burst rates, more megapixels, and it even excels in more niche stats like flash sync speed. Sure, the A1 costs $6,500 (as much as the flagship DSLRs meant for hardcore professionals), but it has, well, pretty much everything you could want in a camera. And while we’re still expecting Canon and Nikon to introduce flagship mirrorless models of their own, the A1 is the top of the heap, at least for the moment.

Sony A1 hardware and specs

Before the A1 showed up, Sony pro shooters had to choose between the speedy, 24.2-megapixel A9 II for shooting action and the burly A7R IV and its lofty 61-megapixel resolution. The new Sony camera effectively combines the best parts of each camera into a powerful photographic Voltron. The A1 employs a 50-megapixel stacked CMOS sensor, which lets Sony integrate essential parts of the system (like memory) directly into the chip. This arrangement allows the sensor to readout extremely quickly, which enables super-high frame rates (up to 30 fps in compressed raw mode) and up to 8K video capture.

Sony’s flagship camera achieves superlatives in some other categories as well. Its electronic viewfinder offers a 9.4-million dot resolution with a 240 Hz refresh rate. In the real world, the viewfinder is every bit as smooth and detailed as those numbers suggest. It offers a matching pair of CFExpress card slots, so shooters can crank out large bursts or super-high-res video and still have redundancy in case one of the cards dies. The A1’s weatherproofing is top notch, too.

How fast is the Sony A1 camera?

Crank Sony’s flagship camera up to full speed, and it can capture 30 raw images per second. At this speed, the camera uses a lossy compression format, so you’ll lose a small amount of overall image quality, but you still get the full 50-megapixel resolution. If you’re not willing to compromise on compression, you can still get 20 fps raw capture for as long as your memory cards can stand it. Those numbers match or exceed any other camera on the market at the moment, including Sony’s own A9 II and flagship DSLRs like the Canon 1D X III and the Nikon D6.

Those are impressive numbers, but the Sony A1 also puts up impressive stats when it comes to its electronic shutter. Even though mirrorless cameras typically do almost everything electronically, a mechanical shutter allows them to get around some inherent limitations that affect electronic shutters. Because electronic shutters read an image from top to bottom, for instance, they can run into issues like banding from artificial light (caused by electrical phasing) or the inability to sync with a flash at shutter speeds fast enough to be useful in the real world.

That speed effectively allows photographers to keep the electronic shutter on in most situations, which means the camera can shoot totally silently—among other benefits that come from letting the mechanical shutter remain dormant.

DSLRs at this level typically offer full-sized pro bodies, which have integrated vertical grips and space for massive battery packs that can last for thousands of shots. The A1, however, doesn’t feel that much different than the company’s other A-series mirrorless cameras.

Dials and buttons occupy just about every bit of space on the Sony A1’s body. The top of the camera alone sports five dials and a pair of custom function buttons that shooters can program to their own needs. The back of the camera has a layout that should feel familiar to Sony shooters already.

If you’re coming from a pro DSLR, though, you will notice the difference in battery life. While something like the Nikon D6 can squeeze thousands of shots out of a single charge, the A1 can get somewhere in the 400-500 range. That shouldn’t be a surprise since the A1 battery is considerably smaller, and the mirrorless camera has to continuously power a lot more electronic features. For roughly $400, you can add a vertical Sony battery grip to the A1, which doubles the battery capacity and makes the body more comfortable to use with huge telephoto lenses thanks to improved balance.

Compared to the Canon R5 (which is one of its closest true competitors at the moment), the A1’s controls aren’t quite as customizable, but that’s due mostly to the Canon’s neurotic levels of tweakability.

I do have one gripe about the overall A1 experience as it relates to its ergonomics. When using a larger pro lens like the 70-200mm GM, the grip sits too close to the lens body and causes it to rub on the last knuckle of my middle finger while shooting. On short shoots it’s annoying, but on long one it actually hurts. If you have typical hands, this likely won’t be an issue, but a few sports photographers I talked to had the same complaint.

Most of the cameras that can shoot anywhere near this fast stick around the 24-megapixel range. That’s plenty for most applications, but extra pixels do come in handy if you want to crop your images or apply noise-canceling software during an edit.

Sony’s 50-megapixel A1 raw files are impressive. I’ve been using Canon’s R5 for roughly a year now, and I found the A1’s images extremely similar when it comes to dynamic range and digital noise across the ISO range.

Ultimately, there just isn’t a lot to complain about here. I still slightly prefer the way Canon’s sensors render colors (photo nerds call this the color science), but the Sony’s low-light performance stands up to post-processing extremely well.

Compared to sports-oriented pro DSLRs, the comparison isn’t even close. The Sony A1 doubles the resolution while suppressing noise just as well if not better in many cases.

Speedy shooting is useless if the AF isn’t fast and accurate. Luckily, the Sony A1 had no problem keeping up in any situation I threw at it. It easily locked onto a friend’s German short-haired pointer as it sprinted across a field. The A1 had no problem keeping up with Crossfitters doing box jumps. The camera even navigated random leaves everywhere when trying to shoot some portraits in the woods. It was excellent throughout.

There are a few tiny complaints. For instance, the AF system can track eyes on humans, dogs, and birds, but you’ll have to manually select which one you want at any given time. Still, overall, this is the best-focusing Sony camera I’ve used and one of the best AF systems around full-stop.

Other stuff that impressed me about the Sony A1

The more I look back on my notes from testing this camera, the more features I found that I really appreciate. With the mechanical shutter, you can sync a flash at up to 1/400th second without having to rely on battery-draining high-speed sync. That’s faster than any camera I own except for my leaf-shutter Hasselblad film camera.

The Sony A1 can achieve AF focus down to -4 EV, which is a full stop darker than many other mirrorless cameras. And while that number is hard to visualize on paper, it makes sense when you point the camera into a dark environment like a night club or a literal cave and the focus locks on without hunting all over the place.

Sony has also improved its menu experience by streamlining the layout, which has been a bit of a sore spot in the past. The A1 offers a huge number of options and finding them is relatively quick and simple. There’s always room to improve here, but I have to give Sony credit for the upgrades.

Who should buy the Sony A1 camera?

If you have $6,500 and you want one camera that will excel in any photographic situation you can throw at it, then this is it. You get beautiful, high-res files, super-fast capture rates, robust video modes, and a burly body that can withstand the rigors of pro work.

While the Sony is the champ at the moment, Canon’s R5 isn’t far behind it when it comes to image quality and overall featureset. That comparison makes the Canon’s $3,800 price seem like a relative bargain. If you’re a hardcore sports shooter, the R5 isn’t on the same level, however, so you’ll have to wait for the upcoming R3 to truly compete with the A1 in that regard.

If you’re already a Sony shooter and you don’t need one camera that can do everything, then you’re likely better off looking down the Sony line for something that fits your specific needs. The 61-megapixel A7R Mark IV is an incredible portrait camera and will cost you less than half of the A1 at $2,999. You’ll lose out on the super-high framerate and the speedy electronic shutter, but those things don’t really matter often during a portrait shoot or in the studio.

If you’re a working pro with a solid gear budget (or a Dogecoin millionaire), you won’t regret taking the leap on the Sony A1.