Cosmic cartwheels: Webb captures the chaos of a galactic collision 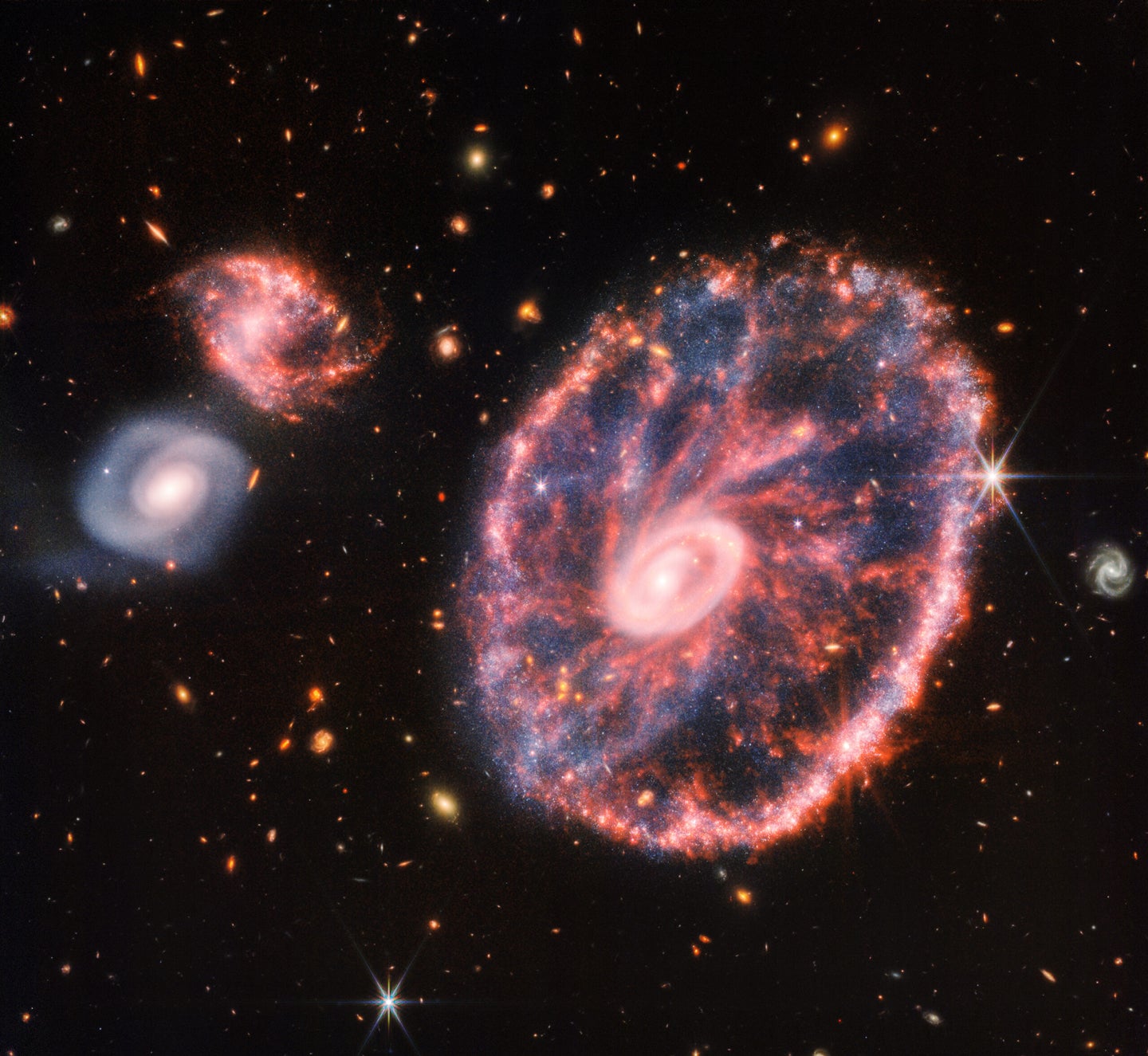 We’re still feasting our eyes on the first set of jaw-dropping images from the James Webb Space Telescope (JWST) and already NASA is back with another cosmic hit. This time it’s a composite of a cartwheel galaxy and its companion, located in the Sculptor constellation. According to NASA, the galaxy dates back 400 million years.

What can you see?

The image combines multiple shots captured with Webb’s Near-Infrared Camera (NIRCAM) and Mid-Infrared Instrument (MIRI). Looking at the cartwheel galaxy (the largest of the three,) two rings are visible including a bright inner ring and a colorful outer one—the galaxy is the product of a high-speed cosmic collision.

Further inspection reveals the shockwaves that expand from the impact center. Despite the collision, the galaxy’s spoke-like “rotating arms” are still visible. The red that we can see in the spirals glows due to hydrocarbon-rich dust. According to NASA, because the galaxy is under competing forces, it is difficult to predict the final form it will take on.

“In this near- and mid-infrared composite image, MIRI data are colored red while NIRCam data are colored blue, orange, and yellow,” NASA writes on the JWST website. “Amidst the red swirls of dust, there are many individual blue dots, which represent individual stars or pockets of star formation. NIRCam also defines the difference between the older star populations and dense dust in the core and the younger star populations outside of it.”

The first of many images to come

This is the first JWST image NASA has dropped since its big debut on July 12. The launch showcased the majestic “Cosmic Cliffs” of the Carina Nebula, the drama unfolding at the funeral of a dying star, and a dance of galaxies known as Stephan’s Quintet—just to name a few.

One of JWST’s future missions will involve scoping out hot exoplanets. Researchers hope that the study will reveal further information about the geological diversity and evolution of rocky planets—including Earth. We’ll be eagerly awaiting the images.