From galaxy evolution to dying stars and distant planets, the JWST’s first images are a dazzling display of cosmic wonder. 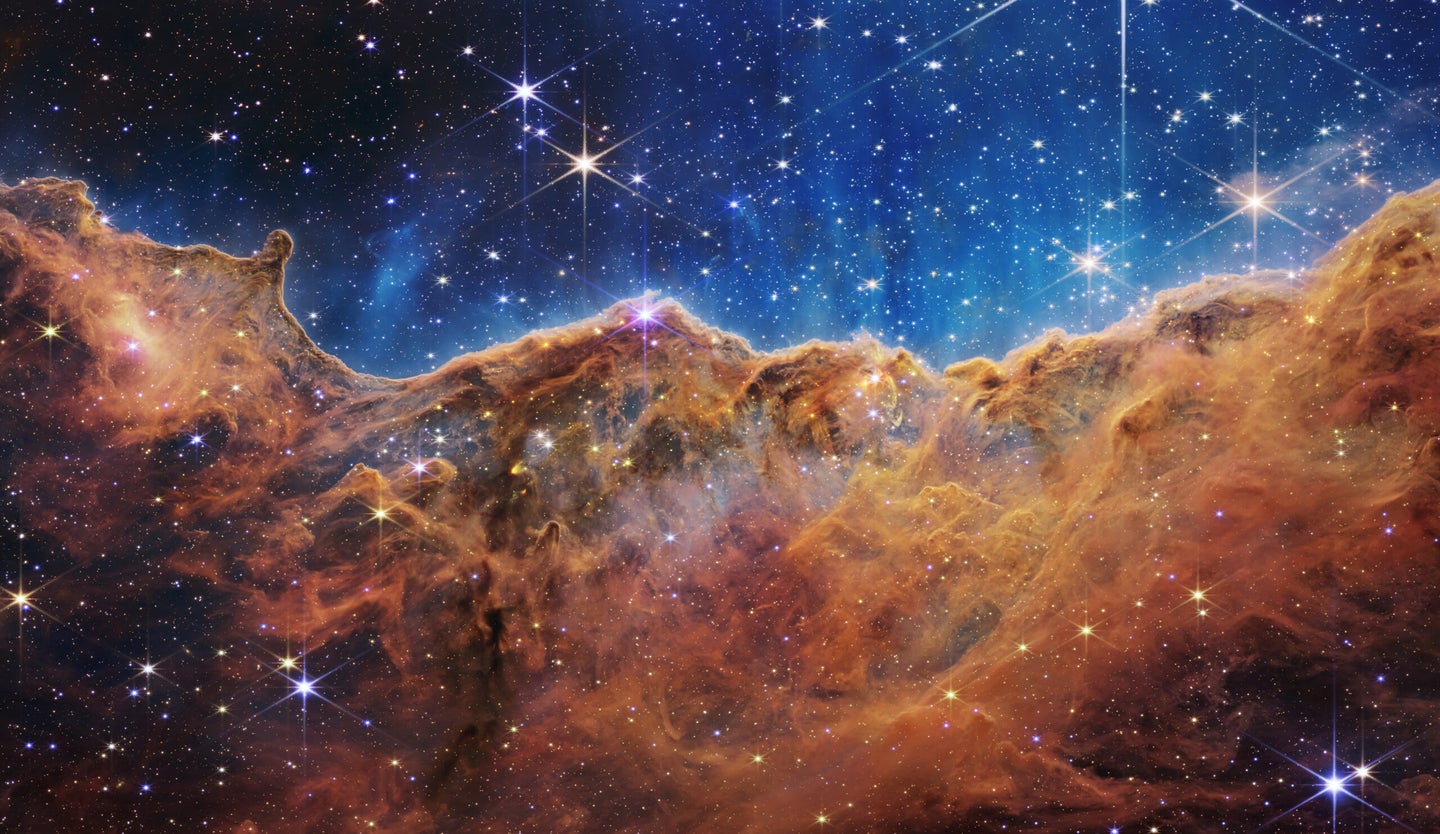 This post has been updated. It was originally published on July 11, 2022.

Puffy gas giants. Cosmic clashes. Stellar nurseries. This morning, NASA presented an additional four images from the James Webb Space Telescope (JWST), each one highlighting one of the deep space telescope’s impressive capabilities. The stellar sights follow up a Monday press conference where President Joe Biden revealed the optics’ first infrared color shot, an image of a galaxy cluster, which NASA Administrator Bill Nelson said represents a fraction of the sky that, in proportion, is about the same size as a grain of sand on a fingertip held at arm’s length.

As noted by the agency during Tuesday’s broadcast, the images were a result of a collaboration between NASA, the European Space Agency (ESA), and the Canadian Space Agency (CSA). Let’s take a look:

Dramatic and dazzling, this image of the Carina Nebula was the final image revealed, showcasing what NASA calls “Cosmic Cliffs.” The shapes are the result of a collection of stellar nurseries and individual stars previously obscured by cosmic dust.

This image is hopefully the beginning of the quest to answer two of astrophysics’ most pressing question about why stars form where they do, and how their mass comes to be.

“The blistering, ultraviolet radiation from the young stars is sculpting the nebula’s wall by slowly eroding it away,” NASA notes. “Dramatic pillars tower above the glowing wall of gas, resisting this radiation. The “steam” that appears to rise from the celestial “mountains” is actually hot, ionized gas and hot dust streaming away from the nebula due to the relentless radiation.”

Located 1,150 light years away, WASP-96 b is a gaseous exoplanet with half the mass of Jupiter but that’s 1.2 times its diameter. Here, temperatures soar well above 1,000 degrees Fahrenheit, as the planet orbits incredibly close to its star—one orbit lasts just 3.5 Earth days.

The resulting light curve shown in this image reveals “the unambiguous signature of water, indications of haze, and evidence of clouds that were thought not to exist based on prior observations,” according to NASA. It was possible thanks to the JWST’s giant 270-foot gold-coated mirror, which is able to expertly gather infrared light. The telescope’s precision spectrographs—sensors that split light into distinct wavelengths—have a wide range, allowing them to then translate the light into many colors. Planetary scientists plan to employ spectroscopy in the study of many other exoplanets, whose surfaces range from rocky to gaseous.

Pull up a chair: This image is a front row seat to a dying star. Closer inspection reveals two stars in a tight orbit, surrounded by planetary nebulae.

“Planetary nebulae are the shells of gas and dust ejected from dying stars,” NASA writes. JWST’s infrared is so sensitive that it pulls the second star into full view. The surrounding clouds are formed by dust and gas swirling around the stars’ gravity. “New details like these, from the late stages of a star’s life, will help us better understand how stars evolve and transform their environments,” NASA points out.

If you’ve watched It’s a Wonderful Life, this image might ring a bell. This image of a cluster of five galaxies, known as Stephan’s Quintet, is composed of 150 million pixels and 1,000 separate images. With a size a fifth of the moon’s diameter, that makes it the largest JWST image just far.

“The information from Webb provides new insights into how galactic interactions may have driven galaxy evolution in the early universe,” NASA shares. In this image, you can observe clusters of young stars, star birth, and gravity pulling on gas tails, dust, and stars. At 40 million and 290 million light-years away, this cluster is close enough to be considered a neighbor. The Quintet will provide insight that will allow scientists to understand galaxies much farther away.

“This proximity provides astronomers a ringside seat for witnessing the merging and interactions between galaxies that are so crucial to all of galaxy evolution,” NASA says.

The image is a composite of many at several wavelengths, for a total exposure of 12.5 hours.  The many specks represent distant galaxies—thousands of them—and is the most detailed view of the early universe, according to the agency. Light travels approximately 186,000 miles per second, and the light we see in this image has been traveling for over 13 billion years. As part of its mission, the JWST will continue to probe deep into the past.

“[The galaxies] have tiny, faint structures that have never been seen before, including star clusters and diffuse features,” NASA writes. “Researchers will soon begin to learn more about the galaxies’ masses, ages, histories, and compositions, as Webb seeks the earliest galaxies in the universe.”