Filled with glimmering young stars, swirling gas, and interstellar winds, the Lobster Nebula is a sight to behold. 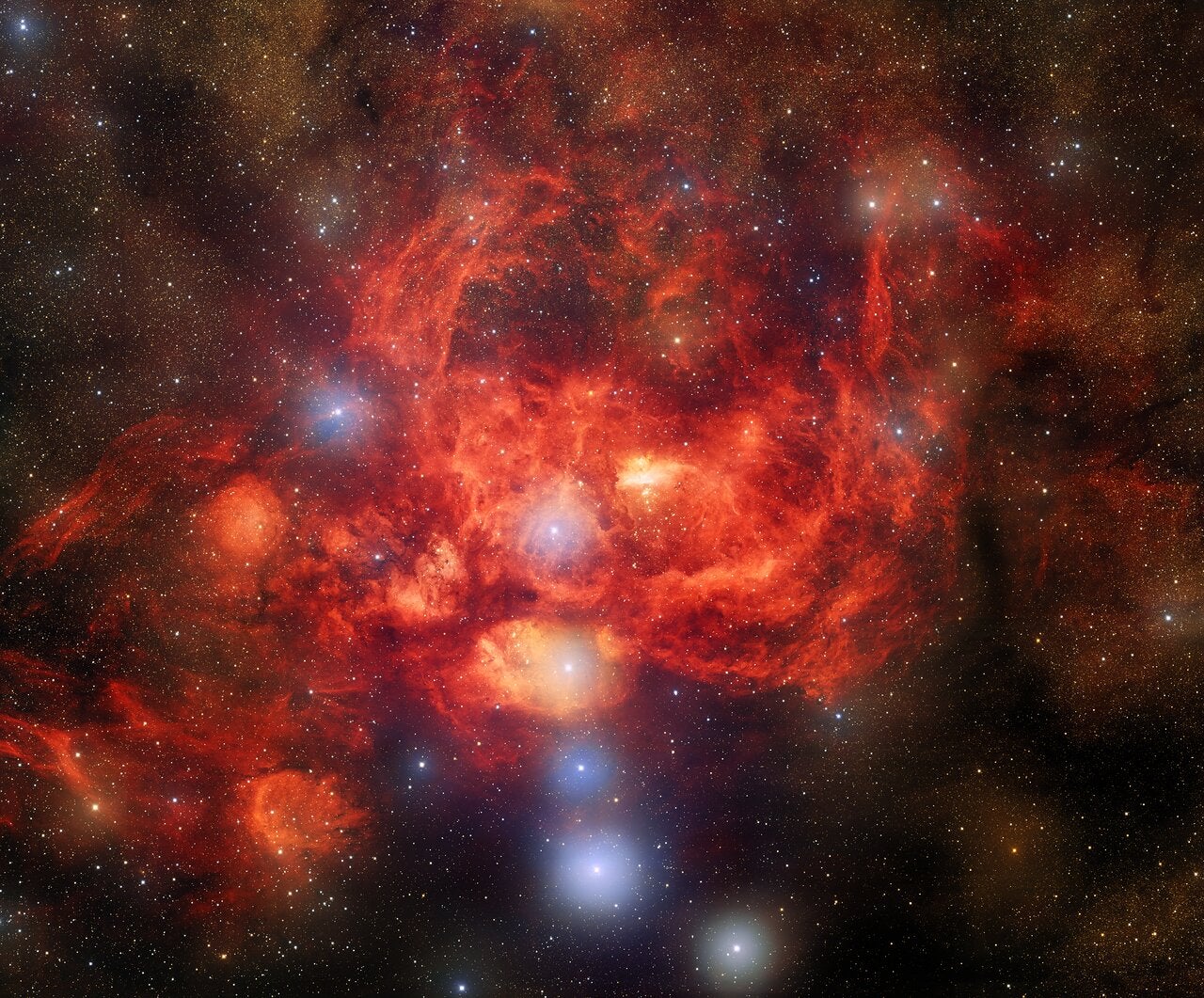 "This image, taken by astronomers using the US Department of Energy-fabricated Dark Energy Camera on the Víctor M. Blanco 4-meter Telescope at Cerro Tololo Inter-American Observatory, a Program of NSF’s NOIRLab, captures the star-forming nebula NGC 6357, which is located 8000 light-years away in the direction of the constellation Scorpius. This image reveals bright, young stars surrounded by billowing clouds of dust and gas inside NGC 6357, which is also known as the Lobster Nebula". CTIO/NOIRLab/DOE/NSF/AURA
SHARE

Lobster, anyone? Another day, another mouthwatering space photo to feast your eyes on. This 570-megapixel image was made using the US Department of Energy’s Dark Energy Camera (DECam), which is located on top of the Víctor M. Blanco Telescope at Cerro Tololo Inter-American Observatory in Chile. Captured as part of the department’s Dark Energy Survey, it reveals thousands of young stars shining in and around a region known as the “Lobster Nebula.”

About the Dark Energy Survey

Operated by the Nation Science Foundation’s (NSF) NOIRLab, DECam has spent the past 10 years hunting far and wide for signs of dark energy. Why? Researchers believe dark energy is the force responsible for a somewhat troubling acceleration in the universe’s expansion. So, as you might imagine, finding and understanding the elusive matter is a top priority.

To commemorate DECam’s decade of service, the NSF released this colorful image of the Lobster Nebula, which is ironically located in the Scorpius Constellation. At about 8,000 light-years from Earth, the nebula, also known as NGC 6357, is filled with thousands of fledging stars on the cusp of birth.

Stretching roughly 400 light-years across, at its center is an “open star cluster” called Pismis 24. Beyond that, you’ll find “a region brimming with newborn stars, protostars still wrapped in their cocoons of star-forming material, and dense cores of gas and dust that will eventually become new stars,” according to a post on NOIRLab’s blog. Interstellar winds, radiation, and magnetic fields also contribute to the twisting “braids” of red clouds.

How the Lobster Nebula image was made

Researchers observed the Lobster Nebula on multiple occasions, employing a different filter each time, to capture a wide range of light wavelengths. The individual images were then stacked to create the final version shown here.

According to the NOIRLab, DECam is one of the strongest wide-field, charged-coupled device (CCD) cameras in the world. It can capture even the faintest sources of light in our universe and is able to deliver up to 500 observations a night. In fact, DECam just hit its one millionth image milestone!

What a year for space photography

2022 is turning out to be a fantastic year for space photography. The James Webb Space Telescope (JWST) has been hard at work since its December 2021 launch, focusing on some of the oldest portions of the universe as well as our own neighbors, while Hubble continues to impress with snaps of star clusters and phantom galaxies (with some help from Webb).

Land-based telescopes have also contributed to the fun. Just a few days ago we were treated to an incredibly up-close-and-personal view of our sun, thanks to researchers using the Daniel K. Inouye Solar Telescope. And now we have this smashing shot of everyone’s favorite interstellar crustacean. Which begs the question, what will we be treated to next?