Webb photographs what may be the universe’s oldest galaxy

In the largest galaxy survey ever recorded, Webb reveals what researchers believe to be the universe's oldest galaxy, plus supernovae and star clusters. 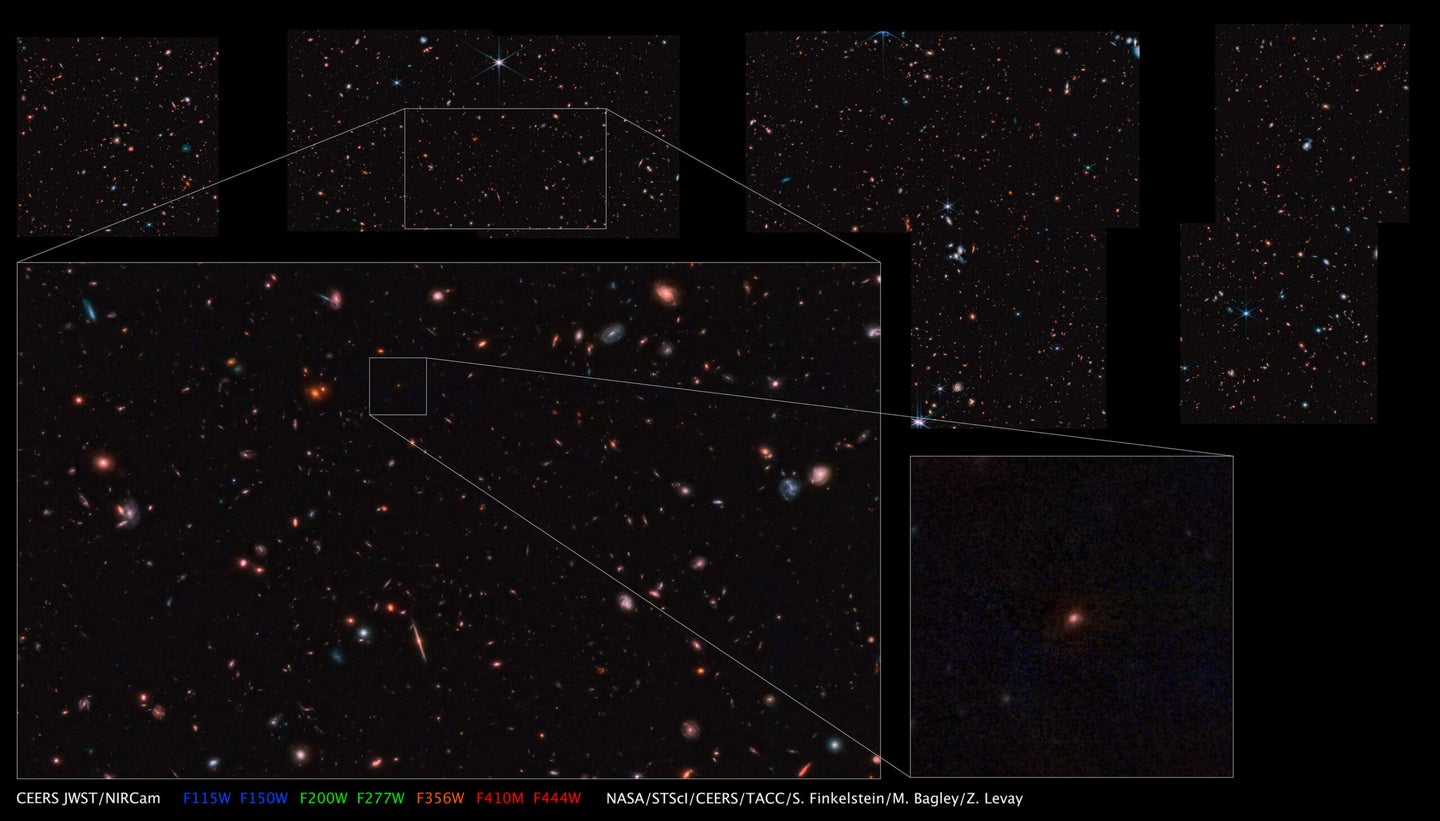 "Scientists with the CEERS Collaboration have identified an object—dubbed Maisie’s galaxy in honor of project head Steven Finkelstein’s daughter—that may be one of the earliest galaxies ever observed. If its estimated redshift of 14 is confirmed with future observations, that would mean we’re seeing it as it was just 290 million years after the Big Bang". NASA/STScI/CEERS/TACC/S. Finkelstein/M. Bagley/Z. Levay
SHARE

In its largest composite image to date, the James Webb Space Telescope (JWST) showcases dazzling details of faraway supernovae and what is perhaps the earliest-known galaxy. The mosiac, released by the Cosmic Evolution Early Release Science Survey (CEERS), consists of 690 individual pictures, and at full resolution is a whopping 268MB. The findings are the first in a two-part survey to be completed by the end of the year.

CEERS Webb mosaic at a glance

The completed mosaic is JWST’s largest survey to date and was made using Webb’s Near-Infrared Camera (NIRCam) and Mid-Infrared Instrument (MIRI). Dubbed Epoch 1, the target of the study is an area of the sky located near the Big Dipper’s handle. The results reveal previously unseen galaxies.

For reference, the CEERS Webb mosaic is eight times the size of JWST’s first deep field image that debuted at launch. However, in its current state, it represents less than half of the full survey researchers intend to complete by year’s end.

What can you see in the CEERS Webb mosaic?

Zooming in, the CEERS team provides details on six regions. They show a diverse group of findings, including spiral galaxies, supernovae, star clumps and clusters, and galaxy pairs and alignments.

Additionally, pending further study and confirmation, JWST may have observed one of the earliest galaxies ever. Dubbed Maisie’s galaxy, it would appear we are observing it as it was less than 290 million years after the Big Bang. Talk about a galaxy far, far away!

Researchers also used the CEERS Webb mosaic to compare JWST’s resolution capabilities to the Spitzer Space Telescope, which launched in 2003. JWST’s MIRI employs wavelengths previously unseen and unstudied at such a resolution, which will allow researchers to observe and distinguish distant celestial objects like never before.

What’s next for the CEERS team? Epoch 1, completed in June, will be followed by Epoch 2, scheduled for December 2022. We can only guess what they’ll uncover next.