Gaze into the heart of a ‘Phantom Galaxy’

Webb's latest cosmic image, made with the help of Hubble, showcases the splendid spirals of the M74 Phantom Galaxy. 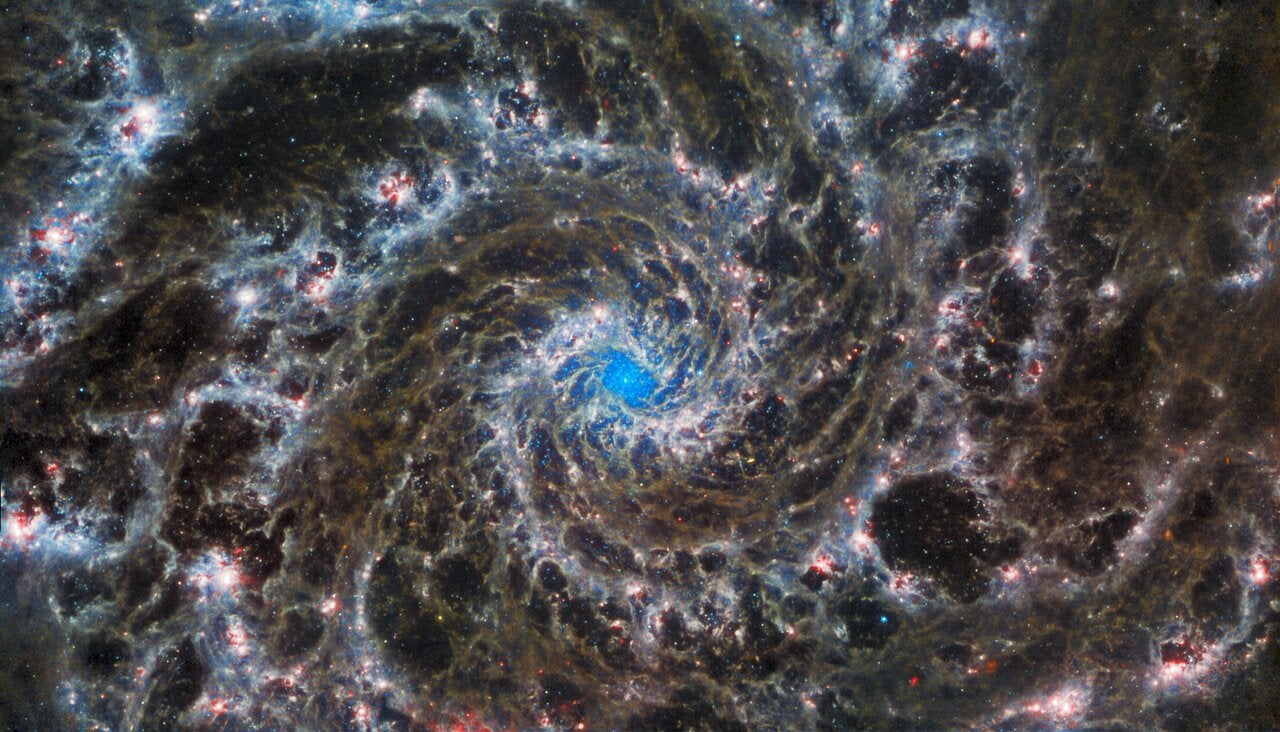 The blue at the vibrant center of the Phantom Galaxy is a nuclear star cluster. NASA/ESA/CSA
SHARE

There’s a phantom in the neighborhood, and the James Webb Space Telescope (JWST) paid it a visit. The European Space Agency (ESA) released a new image of the M74 Phantom Galaxy this week, its majestic spirals on full display. The image combines data from both Webb and the Hubble Space Telescope. Here’s why it’s so special.

The M74 Phantom Galaxy is one of intense interest

Located 32 million light-years from Earth in the Pisces constellation, the M74 Phantom Galaxy is essentially face-to-face with our planet. This makes it a popular subject of study among astronomers investigating the origin and structure of galactic spirals.

According to ESA, this galaxy is considered a “grand design spiral” because its arms are incredibly defined, with dust and gas filaments visible. There is also a brilliantly mesmerizing view of its nuclear star cluster at the center of the galaxy, only visible due to the lack of gas in that region.

JWST’s observations complement others’ of the M74 Phantom Galaxy

Make no mistake, JWST is far from the first telescope to observe the Phantom Galaxy. In fact, it joins the Hubble Space Telescope and ground observatories in studying neighboring star-forming galaxies as part of the Physics at High Angular resolution in Nearby GalaxieS (PHANGS) collaboration.

Hubble has observed the M74 Phantom Galaxy before, focusing on the notably bright areas of star formation, known as HII regions. The telescope’s strength is in the ultraviolet and visible light wavelengths, while JWST specializes in the infrared spectrum. These two, combined with ground radio telescopes, allow researchers a much deeper understanding of the galaxy than if they relied on just a single instrument.

“The addition of crystal-clear Webb observations at longer wavelengths will allow astronomers to pinpoint star-forming regions in the galaxies,” ESA writes, as well as “accurately measure the masses and ages of star clusters, and gain insights into the nature of the small grains of dust drifting in interstellar space.”