With a well-rounded camera, beautiful lens, and affordable yet capable flash, this release has a little bit of something for everyone. 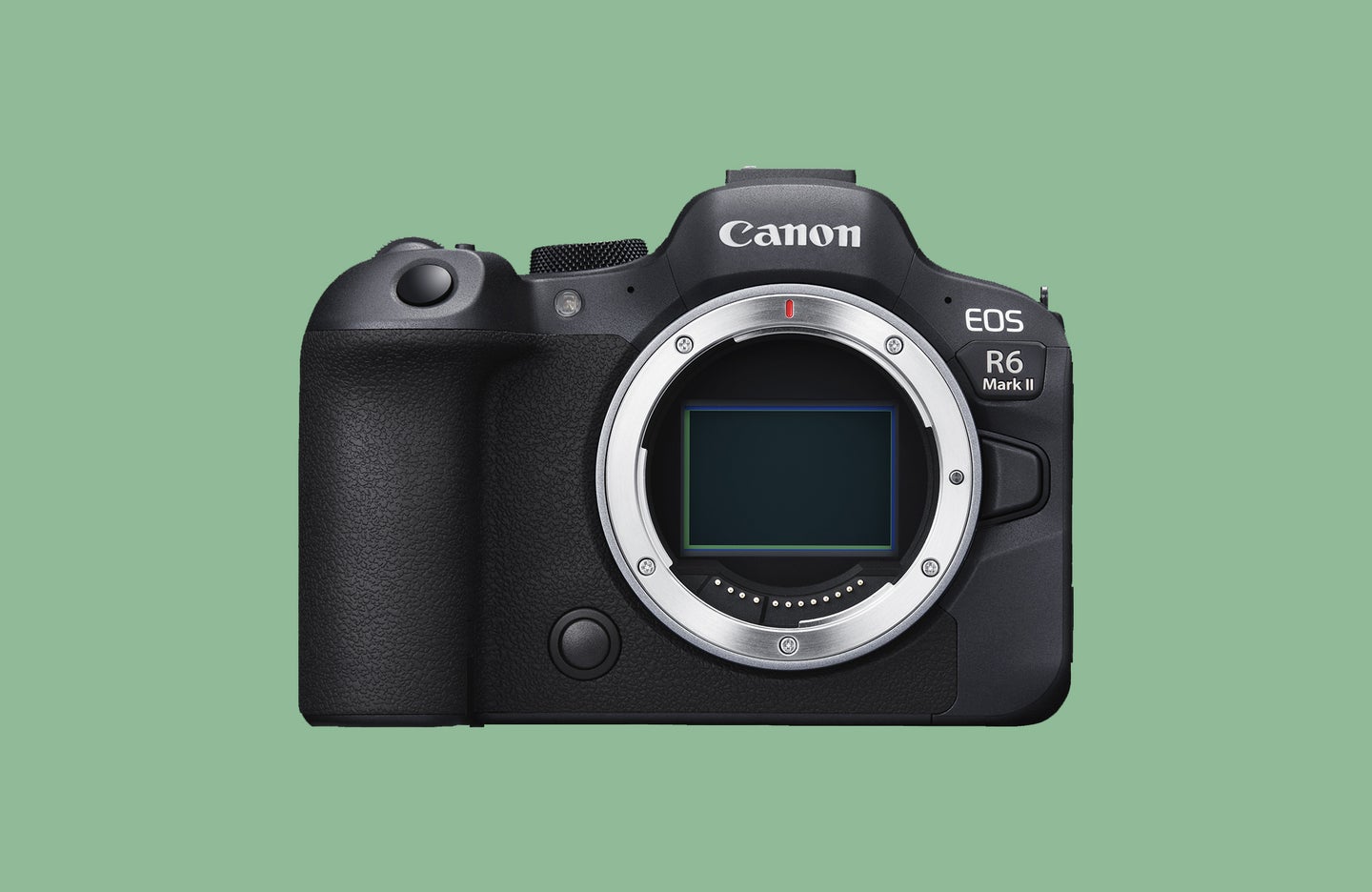 Canon is keeping busy lately with a consistent parade of new gear. Just this summer, it launched the EOS R10 and R7 cameras. And now, it has announced the EOS R6 Mark II, RF 135mm F1.8 L IS USM lens, and the Speedlite EL-5.

These three new pieces of gear should appeal to photographers and video shooters in a variety of different disciplines. The EOS R6 Mark II continues the tradition of well-rounded cameras and offers excellent still shooting and high-quality video as well. The lens should have most sports photographers drooling, while the flash is perhaps a wedding photographer’s dream. There’s a lot to digest, so let’s dive in.

The star of this launch is, not surprisingly, the camera. Canon released the original R6 in the summer of 2020 as a mirrorless replacement for its popular EOS 6D DSLR camera. The R6 was an excellent all-arounder, and the 24.2-megapixel Mark II continues that tradition but with some new tricks up its sleeve.

Canon was very specific in who they think the camera is best suited for. First and foremost, Canon sees this camera as an entry point to mirrorless cameras for DSLR users. The primary market shouldn’t be a surprise, given the trends in the camera industry in the last few years. As smartphones have eaten more and more of the market’s lower end, advanced amateurs have become increasingly important to camera companies. And here, the specs and features are very much tailored toward content creators. It’s an ideal choice for those looking for one camera that can do a lot of things well instead of needing multiple specialized tools to create photos and videos. Finally, it’s very much designed for action, as evidenced by the shooting scenarios they set up on a recent press trip.

At first glance, the R6 Mark II won’t strike you as being much different from the original. In fact, the body remains essentially the same, with the same dimensions, weight, and general form factor. The only external difference is that some buttons on the top have been rearranged on the top of the Mark II. The power switch has been moved to the right side of the camera, and in its place is a stills and video switch. Beyond that, if you know and love the R6, you’ll get a completely familiar experience with the Mark II.

Within the camera, Canon moved from the 20MP full-frame CMOS sensor of the original R6 to a brand new 24.2MP CMOS sensor in the Mark II. It’s worth specifying that this new sensor is not backside-illuminated (BSI) or stacked, which helps keep the cost of the camera down. Canon also says there is new image processing in the R6 Mark II that can produce resolution performance better than the EOS 5D Mark IV, which has a 30.4MP sensor.

The R6 Mark II promises speed. It’s capable of 12fps with the mechanical shutter and up to 40 fps with the electronic shutter at 12-bit raw file size. Additionally, it offers a Raw Burst Mode with pre-shooting when using the electronic shutter. When this is on, and your finger is on the shutter button, you’ll get a half-second of coverage before you press the shutter. For high-speed sports and action images, this could make the difference between getting the shot and not.

One of the most notable upgrades is the video capabilities of the R6 Mark II. Despite having some reasonable video specs, the R6 was best suited as a stills camera. It could record 4K60p video but with a slight crop. It also had overheating issues, which limited recording times.

The R6 Mark II, however, is fully intended as a hybrid camera. It’s capable of up to 6K raw external recording or 4K60p full-width internal recording now. It can also record full HD at 150 fps for excellent slow-motion footage. And Canon says it has improved the heat limitations on the Mark II. It claims the only real limitation to recording length at this point is battery life and memory card space. This is especially beneficial for those who create long-form YouTube videos or live-stream content.

Autofocus is always an area of (pun intended) focus in new camera releases, and Canon has certainly stayed true to that. The R6 Mark II has inherited the autofocus from the R3. The R3 will still offer a bit better performance due to the stacked BSI sensor. But Canon says the R6 Mark II has an improved Deep Learning engine to offer even more accurate subject tracking.

One thing we keep seeing in updated autofocus systems is the addition of new subjects in the autofocus tracking settings. Canon has added horses and trains but has also added an Auto Subject Tracking option. This will likely be the ideal choice for lots of people and should simplify autofocus settings. The new system absolves photographers from having to dig into their settings because the auto mode will do a solid all-around job. The Auto mode selects subjects that are near the center of the frame, larger in size, a person, or something that was the main subject in the previous frame.

One unique feature is the addition of individual eye tracking. You can select either the left or right eye (or auto) to lock focus onto so that even if your subject turns and moves, the focus will stay consistent on that eye instead of moving around on the face. Another exciting addition for video creators is the Detect Only AF, which only focuses on the subject, even if they go behind something. So, if your subject moves behind a wall, for example, the camera won’t shift focus to the wall. This should create a much smoother experience in video.

Sticking to sports and action, Canon is releasing a new 135mm telephoto lens. The lens will likely be most useful for sports photographers and photojournalists, though could be a beautiful portrait lens as well. Canon says the RF version will be much better than the already-excellent EF 135mm in terms of performance and optical quality.

The fast f/1.8 aperture improves focusing and low-light performance and, combined with the circular diaphragm, results in beautiful, smooth bokeh. It features a fast and quiet focusing motor, able to keep up with fast action sports. Though it’s by no means a macro lens, it features a minimum focusing distance of just 2.29 feet. It also provides a maximum magnification of 0.26x.

The lens barrel contains 17 elements in 12 groups. That includes three UD elements to reduce chromatic aberrations. It will accept 82mm filters and utilizes an Air Sphere coating to reduce ghosting and result in clearer images. It also provides 5.5 stops of image stabilization. And when combined with a camera with IBIS, you’ll be able to get eight full stops of stabilization.

It’s not a small lens, though telephotos of this length never are. It weighs 2.06 pounds, which is slightly more than the EF version of Canon’s 135mm. And it measures 5.1 x 3.5 inches, which, again, is just slightly larger than the EF 135mm. It does offer a fair amount of customization, with two buttons and a control ring that have a long list of possible assignable functions so you can quickly access the settings you need most.

The last component of this release is a new, more affordable Speedlite. It’s essentially a junior version of the EL-1, both in price and weight, making it an ideal choice for advanced amateurs or those wanting to start playing with flash. At just 1.08 pounds, it is 20% smaller than the EL-1 and $500 cheaper, but it provides the same power output.

It is important to note that it features the new hot shoe type. As a result, there is limited on-camera flash compatibility at this point. It can be used with other units as an off-camera flash if you don’t have the new hot shoe system, however. In fact, the lower price point of this unit makes it a much more approachable option to building a multi-light setup, even if you don’t have the newest hot shoe type.

One exciting feature is the built-in modeling light. It makes setting up your lighting much easier, especially when working with off-camera flash. The Speedlite also has an AF assist beam, which is power-adjustable, so you can tailor it to the size of the room you are in. It features a custom settings menu and single-button operation to make it much easier to use. And it’s dust and weather resistant. The maximum guide number is 196 feet with a normal recycle of 1.2 seconds or a quick flash of just one second.

The Speedlight EL-5 will start shipping in late March of 2023 and is available for $399.99. All cameras will need a firmware update in order to work with this new Speedlight, which is part of the reason for the later ship date.