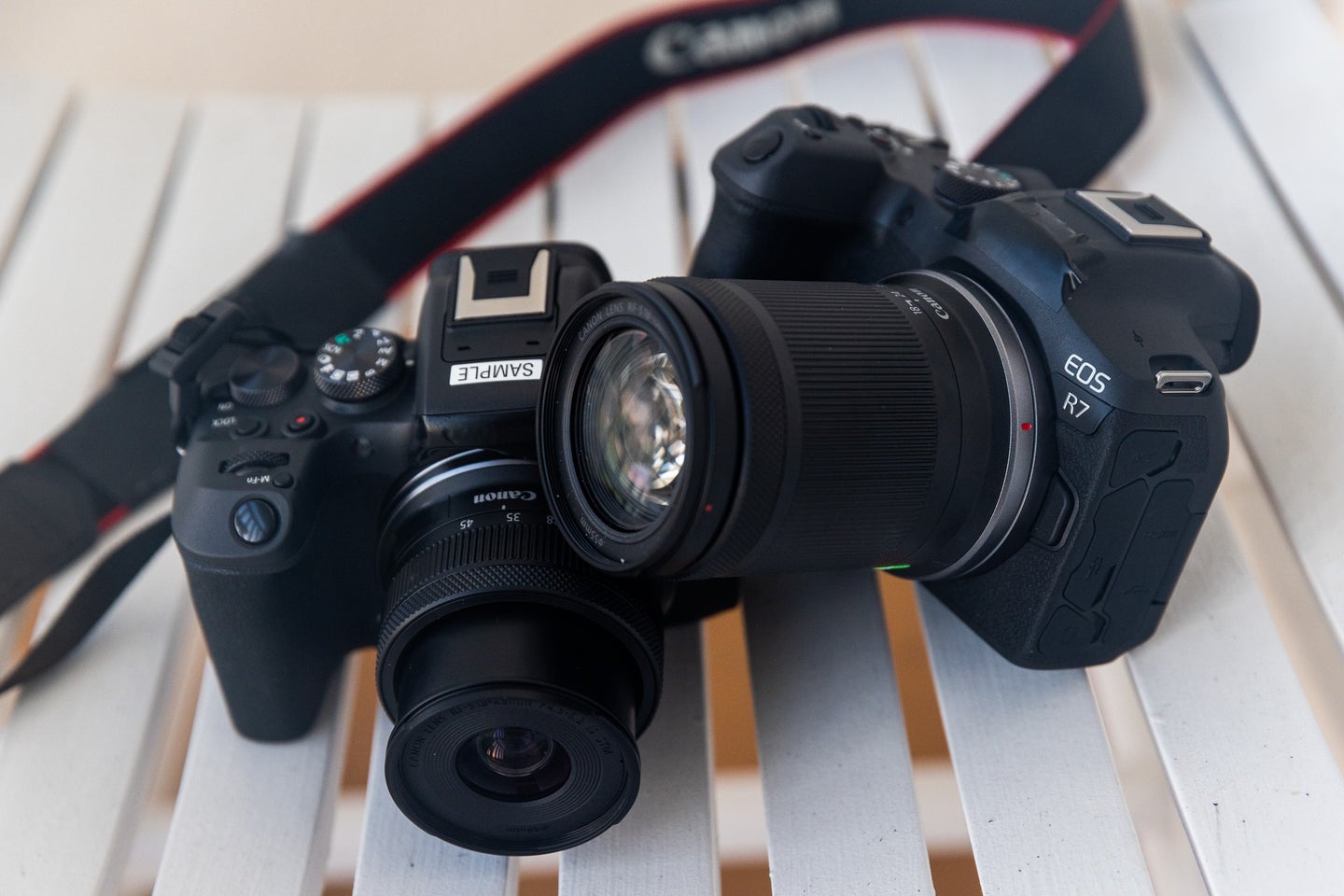 Until now, Canon’s R-series mirrorless cameras have exclusively come equipped with full-frame sensors. Now, with the release of the new EOS R7 (and the simultaneously announced R10), the company has expanded the line into APS-C territory.

Instead of simply working around the limitations that come with a smaller sensor, Canon has leaned into a few of its strengths by keeping the body small, cranking up the maximum shooting speed, and allowing for un-cropped 4K video capture from oversampled 6K footage. Combined with an autofocus system that strikes a surprising resemblance to what you’ll find in the company’s R-series flagship, the R3, and you have a very capable sports and all-around camera for $1,499 (body only).

PopPhoto was one of the first outlets to get to try the new R7 on a recent press trip. These impressions come from roughly two days spent shooting with a retail-ready body. We expect to expand this review down the line when we have extended opportunity to shoot with it.

What is the Canon R7 mirrorless camera?

As its name suggests, the R7 is a spiritual successor to the Canon’s 7D-series DSLRs. The R7 centers around a brand-new 32.5-megapixel sensor that the company optimized for speed as well as image quality. It’s not a stacked sensor like you’ll find in the R3 (or other super-high-end cameras like the Sony A1 and Nikon Z9). In fact, it’s not even backside-illuminated (BSI) as you might expect.

Instead, Canon built a more traditional CMOS sensor that’s capable of churning out up to 15 fps with the mechanical shutter or 30 fps when fully electronic. Those numbers handily beat the R7’s big sibling, the R6, which tops out at 12 fps mechanical and 20 fps electronic despite offering more than 50 percent more megapixels.

This is a camera for shooters who want to cover fast action without forking over tons of cash for an R3. It would be great in the stands or on the sidelines of a school sporting event or out in the woods on a long hike trying to get some great bird shots without compressing your spine under the weight of your gear.

In order to help the R7’s AF system keep up with its speedy burst rate, Canon equipped it with the same basic focusing tech you’ll find in the flagship R3. The R7 isn’t quite as fast or accurate, of course—there are some huge hardware difference in play. But, the R7 does offer the same tracking AI that you’d get with an R3. It can regognize people, animals (including birds and dogs), and cars. Plus, it can keep tracking even when a person’s frame goes out of frame because they turn or an obstruction gets in the way.

I started off our initial review period using the AF as it’s set up out of the box. Except for the lack of eye-control, it really does feel like using diet version of the R3. Press the button (yes, I still use shutter-button AF very often instead of back-button) and it quickly locks onto what it believes to be the subject. We started our shooting in a bird sanctuary and it could quickly hunt down and stay with an avian subject, even in-flight.

If you’re used to the process of telling the camera where to start tracking and then letting the servo function go from there (like I typically do with my everyday camera, the R5), this AF system takes a little getting used to. In most cases, you can simply start the AF and it will grab whatever it perceives as the most likely subject. It doesn’t always get it right, of course, but the multi-directional controller allows switches between detected subjects quickly and easily. Pressing the joystick controller also resets the tracking before starting the process over again, which comes in handy when it stubbornly won’t let go of the wrong subject.

Even though it’s fast and accurate, shooters will really want to dig into the advanced AF menus in order to make the most of the system. It offers pages of custom AF tweaks, including the familiar sports modes carried over from the 1D X- and 7D-series DSLRs. They allow the camera to stay locked onto a subject, even if other objects quickly move into the frame (something that happens a lot with birds and sports). Or, a different mode allows it to quickly grab onto an object as soon as it comes into frame, which can be useful if you’re trying to capture a subject as it travels quickly past a specific spot.

Shooting at a skatepark, I often held the camera up over my head to capture skaters moving around inside the bowls. Even without any tweaking, the camera quickly and easily grabbed and tracked the subjects as they moved quickly across the scene. I didn’t need to look through the viewfinder, which meant I was free to watch for errant boards marauding toward my ankles. It still got the shots.

The high burst-rate also came in particularly handy for the skatepark. Even at full-blast, the R7 can track a fast-moving subject. I did have to turn off the subject switching feature, though, to keep the camera from occasionally getting confused and moving onto the wrong object.

Overall, I was very impressed with the overall AF performance, but it really starts to shine once you get over the learning curve and do some customization.

To be clear out front: I shot the vast majority of my images with the new R7 in large fine JPEG mode because raw support is non-existent in popular editing software at the moment so my overall assessment comes from analyzing images straight out of the camera.

Generally speaking, the R7 performs excellently. I originally thought its non-BSI design may hurt its low-light and high-ISO performance, but I was actually impressed with most of the results. Some of the bird photos I captured pushed the ISO all the way up to 6400, which is a stretch for an APS-C sensor, and they still maintained lots of detail, tame noise, and solid color accuracy. Obviously, you don’t want to be shooting up there all the time, but the drop in overall image quality from low settings to higher numbers doesn’t muddy up the images as much as they have in the past with a camera like this.

With 32.5 megapixels of resolution, it offers a lot of image data to work with during the editing process. That many pixels also allow for considerable noise-reduction without totally obliterating all the fine details in the image along with the ugly noise.

We’ll obviously give this a more thorough test once we have more access and the ability to edit raw files in our typical process, but I think sports photographers will be generally very satisfied with the image quality right out of the camera. It offers solid noise performance and Canon’s color science, which go a long way in action shooting.

While the 7D DSLR models closely mimicked their up-market 5D counterparts, the R7 takes a slightly different approach. First, the R7 is considerably smaller and lighter than the full-frame models. With a battery and memory card, it weighs roughly 21.5 ounces, which is noticeably lighter than the nearly 27-ounce R5. It’s not quite as compact as the Canon M-series mirrorless cameras, but it’s close.

Despite its smaller size, the R7 offers a chunky grip and a very smart control arrangement on the back of the device. The control wheel now surrounds the joystick at the top of the camera next to the viewfinder. It still offers a horizontal wheel where the thumb naturally rests and another wheel in up near the shutter button.

I still ultimately prefer the wheel separate from the joystick—my clumsy thumb accidentally turned the wheel a little when I was mashing the stick. But, that was mostly the case when I was holding the camera one-handed. With just a little bit of practice, I found the R7 extremely easy to navigate, especially after customizing some of the controls to fit my own quirky habits.

The R7 has a built-in vari-angle touchscreen, which flips out and around like the display on its full-frame R-series bodies. It works pretty much exactly as you’d expect, which is a good thing in this case.

There’s a focus-mode switch between the grip and the lens mount, which I hit once or twice by accident, though again, I think that’s more a function of my own clumsiness than a real design flaw. The top of the camera offers a mode dial, the power switch (which also enables video mode), a movie record button, and a dedicated ISO button, which I like. While I do miss the top display from the R5 a bit, it definitely wouldn’t have fit on a camera this size.

With basically one shooting day to test the camera, I focused almost exclusively on evaluating the R7’s photographic chops, but it does offer some solid video specs. It shoots full-frame 4K 60p from oversampled 7K footage. Its video modes can also take advantage of its advanced AF features, it can pass clean footage out via HDMI, and it has a built-in headphone jack. The R7 also offers Canon’s advanced accessory shoe on top so it’s compatible with microphones and other gear.

I shot some quick video just to see how it feels and it looked solid, but look for more in-depth coverage of that down the road.

The rest of the Canon R7 features

Look inside the R7 and you’ll find 5-axis image stabilization, which works well, at least in our short tests. It’s weather-sealed, which is important for a camera meant for sports, and it has a pair of high-speed SD card slots for keeping backups of your images as you shoot. Cameras like this make particularly good use of two slots because it’s often handy to shoot JPEGs to one card for quick editing or transmitting, while shooting raw on the other card for later tweaking.

Who should buy the Canon R7?

Many Canon shooters have been waiting a long time for this body. It’s extremely fast, but doesn’t sacrifice overall resolution. It actually takes advantage of the mirrorless configuration to make the camera noticeably smaller than its DSLR counterpart.

For people who regularly go out birding or spend time on the sidelines of sporting events, it’s hard to think of another camera in the Canon lineup that’s a better fit. Even compared to the R3, the APS-C crop factor effectively adds extra reach to lenses and the $1,500 EOS R7 adds nearly 10 megapixels to the R3’s 24.1MP total. Compared to the EOS R5 and EOS R6, the R7 offers faster burst rates and a more compact body. Plus, it also beats the R6 in terms of resolution.

We’ll put the R7 through a longer, more rigorous test period down the line, but my first impression was very positive and I’m looking forward to chasing birds around with it in the future.