The Canon R10 mirrorless camera offers a lot in a small package, but it has some hardware limitations. 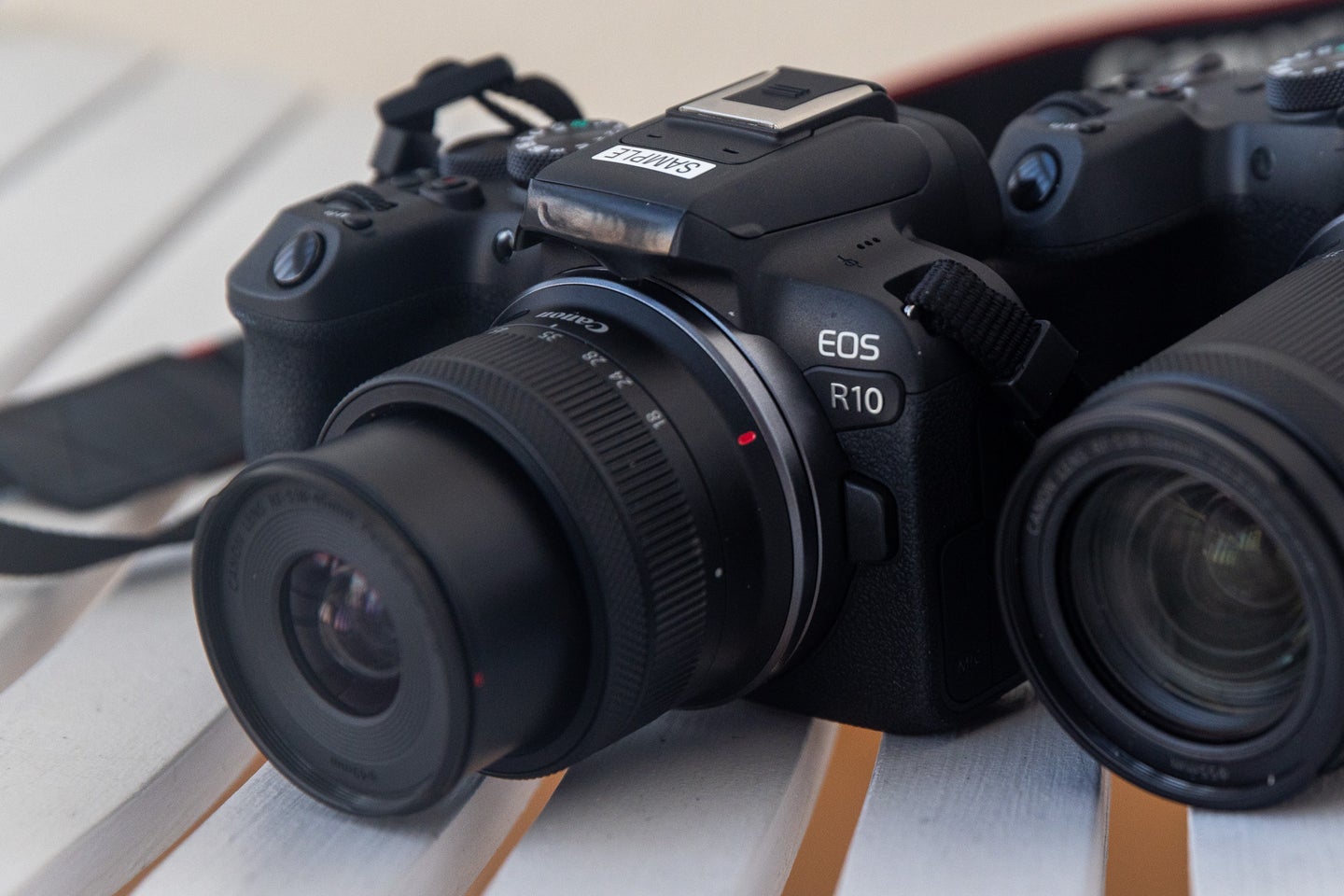 Canon's R10 is even smaller than the R7. Stan Horaczek
SHARE

Pick up the new Canon EOS R10 mirrorless camera and you’ll immediately notice how small it is. Canon gave it a familiar DSLR-style design that’s more in-line with the rest of the R-series cameras than it is with the APS-C-toting M-series bodies. It’s just considerably smaller than its full-frame RF-mount siblings. But, despite its very compact size, the R10 boasts a few impressive bits of technology, including a brand new APS-C sensor, super-fast burst rates, un-cropped 4K video, and an AF system that cribs heavily from the big boss of the R family, the EOS R3.

PopPhoto got an early chance to shoot a retail-ready version of the R10 along with some pre-production samples of the company’s new 18-45mm and 18-150mm kit lenses on a recent press trip to Florida. We’ll be working on a longer review once we’ve had more time to spend with this gear, but here are some in-depth impressions from roughly a day and a half spent shooting with the R10.

At $979, the R10 now sits alongside the full-frame RP as an entry point to the R-series of cameras. The R10 has a brand new 24.2 megapixel APS-C sensor that Canon says it built specifically for this camera—it hasn’t appeared in any other models yet. This is a traditional CMOS sensor with Canon’s focusing tech baked in. Note: It’s not the latest generation of backside-illuminated (BSI) sensors, nor is it a stacked sensor, but that’s to be expected given the relatively low price point.

The autofocus system is a bit surprising for under $1,000, however. Like the EOS R7, which Canon also just announced, the R10 borrows its AF architecture and technology from the flagship R3. Of course, the R3 has a lot more hardware firepower in its sensor and image processing pipeline, so you shouldn’t expect the same level of performance from a camera that costs less than one fifth the price. But, the R10 does offer an impressive amount of customization and can recognize and track objects, humans, birds, and cars just like its big siblings.

This is a camera that Canon intends to sell people when they’re looking to take a step up from a smartphone or a hand-me-down DSLR that’s getting old.

Despite its diminutive size, the R10 still offers a formidable grip. It’s not as robust as what you’ll find on the R7, but it’s easily as good as Canon’s SL3 DSLR, which was the previous champion of tiny Canon system cameras. With one of the new tiny kit lenses attached, it’s comfortable and extremely light—it wouldn’t be hard to cram into a standard backpack or shoulder bag, even if it’s not meant for cameras. The size did become an issue when I attached some much larger lenses to the body. The chunky 50mm f/1.2 RF left so little room between the lens barrel and the grip that I could barely get my fingers in there. It wasn’t very comfortable. Of course, that’s a $3,000+ full-frame lens, which likely won’t spend much time on R10 bodies, but it’s worth noting if you’re thinking about the R10 as a backup body in a pro kit.

The R10 does offer a multi-function joystick, which is a big usability upgrade compared to the RP in my eyes. It doesn’t have dial surrounding the joystick (a feature I really like on the R7), but there is one dial just behind the shutter button on top of the camera. Otherwise, the layout is very familiar for Canon users. I had no problem doing common operations with one hand, especially considering how light the whole thing is.

Like the R7, the R10 offers a vari-angle touchscreen, which would make this a solid option for vlogging, but it sadly lacks a built-in headphone jack, which seems like a missed opportunity.

As with the R3 and the R7, Canon expects the R10 to handle the vast majority of the heavy lifting when it comes to autofocusing (rather than you). In terms of pure performance, the R10 feels similar enough to the R10 when it comes to identifying, locking onto, and tracking subjects to exceed my initial expectations, but not by much. It would sometimes find itself unable to locate the subject or fall off of an object that it should have been able to track. But, it still outperformed it’s sub-$1,000 price tag in this arena.

If you’re going to be shooting a ton of fast action, upgrading to the R7 is likely worth the money for you thanks to the weather-sealing, a better overall button and dial layout, and dual card slots (more on that in a moment). But for everyday situations, I found that I could frequently just leave the R10 on whole-scene AF and let it find the subjects for me.

I was only shooting jpegs because none of our preferred editing software can yet handle the raw files from these new bodies, so a full analysis on image quality will have to come at a later date. Even still, the R10 files look very solid. I was shooting with mostly slow lenses over the course of the review period, which meant regularly pushing the ISO up above 3200, sometimes even to 6400. Even at those high-ISO settings, the R10 does an impressive job of mitigating noise without totally nuking all of the fine detail out of the image. The jpeg dynamic range was impressive, too. Some of my bird shots came out underexposed due to shooting into the sky. I was able to bring detail back out of the shadow without introducing a ton of ugly noise.

The 24.2-megapixel resolution feels a little underwhelming here in 2022, but that’s also in-part because I was directly comparing it to the 32.5-megapixel R7 and my own personal EOS R5, which I was using to capture images of the cameras themselves. Ultimately, the R10 image quality looks very promising and I’m looking forward to seeing what it can do when it has the extra leeway that raw files provide.

Despite its entry-level status, the R10 promises 15 fps in burst mode with the mechanical shutter. Switch to the electronic shutter and that number bumps all the way up to 23 fps. That’s slower than the R7 on the electronic side, but faster than its big siblings, the EOS R5 and EOS R6 in both respects.

In full-auto mode, the camera feels surprisingly powerful. The AF tracks nicely, it shoots absurdly fast, and the Canon color science does its excellent thing. Because I was shooting both an R10 and R7 at the same time, the 24.2-megapixel R10 did feel a little lacking compared to the R7’s 32.5 megapixels. It’s not lacking, but it’s also not pushing the boundary. The much slower RP still offers two extra megapixels if that’s more important than speed for your typical shooting situations.

I’m a big fan of pop-up flashes and the R7 offers one. I didn’t get much of a chance to use it, but I think it’s a great addition to cameras at this level and I’m glad to see it, even if photo snobs tend to look down on this feature.

The R10 has a few very impressive stats under its belt, but this is an entry-level camera after all, so it comes with some drawbacks. First, it uses Canon’s smaller batteries rather than the larger, more versatile LP cells found in the R7 and the full-frame models.

Canon also left off the built-in headphone jack, which is a strike against this body for video shooters. The camera does shoot no-crop 4K 30 fps video oversampled from 6K, which is impressive, but we’ll do a more thorough video test down the road.

Compared to the R7, the R10 also lacks in-body image stabilization and the mechanical shutter doesn’t cover the sensor when the camera is powered off. The R7 also offers more robust weather sealing and a pair of SD card slots. The R10 only has a single SD card slot, which may turn off some higher-end users hoping to use this as a backup in a pro kit. Then again, that’s now the target audience for this body at all.

Who should buy the Canon R10?

In some ways, the R10 is a lot of camera for under $1,000. It offers advanced AF well beyond cameras in tis price range, as well as super-fast burst rates, and the RF mount, which has the vast majority of Canon’s attention when it comes to glass for the foreseeable future. As the company releases more RF-S lenses meant for these APS-C bodies, that last advantage could get even more robust.

Compared to the M-series cameras like the M6 Mark II, the R10 offers fewer megapixels, but makes up for it with improved AF, faster bursts (though, the M6 II can churn a respectable 14 fps), and an integrated electronic viewfinder that doesn’t occupy the accessory shoe. But, the RF mount seems a lot more promising, so it has more potential for the future.