On December 7, 1972, our view of the world was changed forever 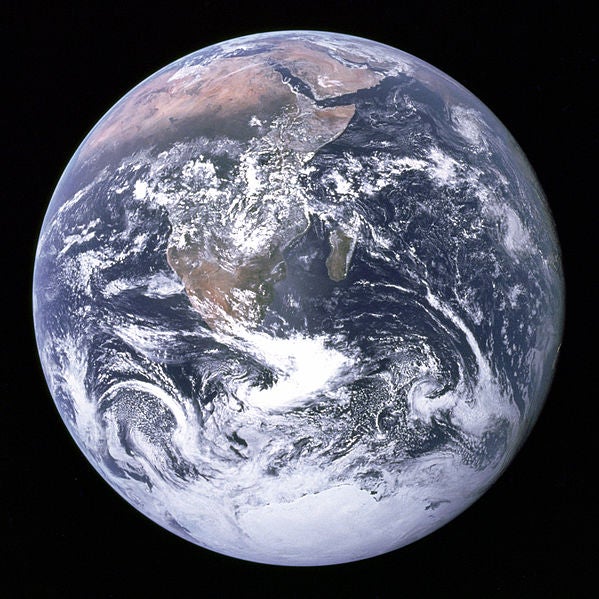 View of the Earth as seen by the Apollo 17 crew traveling toward the moon. This translunar coast photograph extends from the Mediterranean Sea area to the Antarctica south polar ice cap. This is the first time the Apollo trajectory made it possible to photograph the south polar ice cap. Note the heavy cloud cover in the Southern Hemisphere. Almost the entire coastline of Africa is clearly visible. The Arabian Peninsula can be seen at the northeastern edge of Africa. The large island off the coast of Africa is Madagascar. The Asian mainland is on the horizon toward the northeast. NASA/Apollo 17 crew
SHARE

41 years ago on Saturday, a photograph was taken that radically altered the way we saw the world. On December 7, 1972, at 5:39 a.m. EST, the crew of Apollo 17 took a photograph of the Earth. It was named “Blue Marble”, and became one of the most widely distributed images ever created.

Shot at a distance of 45,000km from the surface with a 70-millimeter Hasselblad camera, and an 80-millimeter Zeiss lens, it was jointly credited to all three Apollo 17 crew members: Eugene Cernan, Ronald Evans and Jack Schmitt. This was the last manned Lunar mission, and the photo — while not the first of the Earth from space — was one of the clearest, and arrived at a time where it became embedded in the global consciousness.

Since then, NASA has embraced the Blue Marble as an iconic image, and has used the name for other, high-res space shots of the globe. There were versions released in 2002, 2004, and 2005. And, more recently, one in early 2012, an Eastern Hemisphere one later the same year, and even the Black Marble, shot at night.