Watch a Shark Try and Eat a GoPro 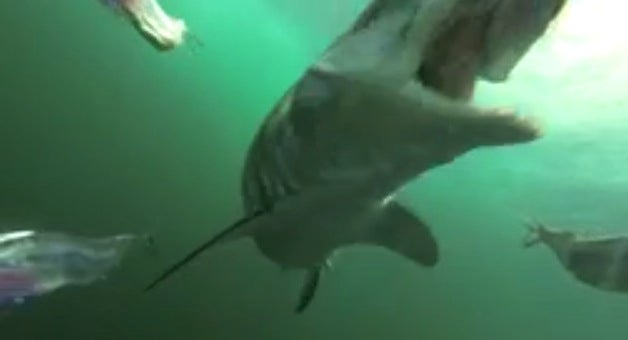 We’re not quite sure what it is about GoPros that make them so appealing to animals to attempt to maul. We’ve seen everything from seagulls to bears to lions chew on, steal, and generally savage the ubiquitous action camera. But this video of a shark getting up close and personal with a GoPro might be the most astonishing yet.

Shot off the coast of Ocean City, Maryland on the 4th of July, the crew of the Pumpin Hard were trolling for tuna from their boat. They had a Gopro HD Hero 3 black off the back if their boat, among the bait. And a shark decided to take an interest in what was going on.

This is apparently a Short Fin Mako, but watching it swim up behind the boat, and grab off the tailing fish is just about enough to scare me off the ocean for good. Between it grabbing entire fish in one bite, and actually trying to swallow the GoPro itself (or at least, that’s what it looks like), you get an astonishing look at an animal in full predator mode. It’s also pretty incredible to watch it open its mouth, and see through its gills at the same time.