Watch a Lioness Try and Swallow a GoPro Camera

No kitty, that's not a chew toy 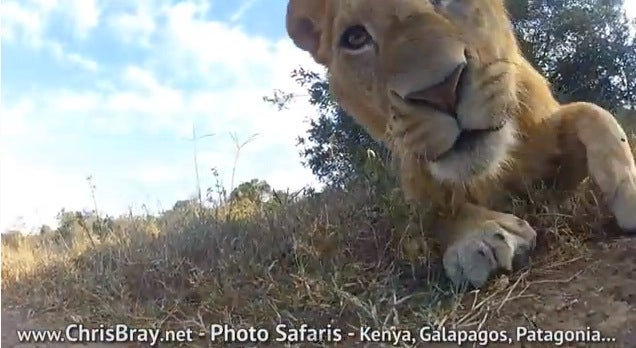 There’s something about action cameras that makes them irresistible to animals, and this video of a lioness trying to chew on a GoPro is no exception. Photographer Chris Bray was shooting in Kenya, and decided to mount his GoPro on a remote control car, and drive it near animals to see what they’d do. As with any cat, this lioness decided the small, fast moving thing going near it was to be played with, and proceeded to do her best to eat the thing whole.

According to Bray’s account, his guides told him that the animals probably wouldn’t mistake it for food — they’d put it in their mouth, realize quickly it wasn’t edible, and then treat it as a toy rather than something to eat. That’s what you can see happen here, with the lioness chewing on it a bit, and then moving on to batting it around to see what it would do.

The video is worth watching to the end to see an elephant contemplate just crushing the whole thing to pieces, and being done with it.