Have you ever wanted to see the world through the eyes of a pet or wild animal? Thanks to tiny cameras like the GoPro, anything is possible 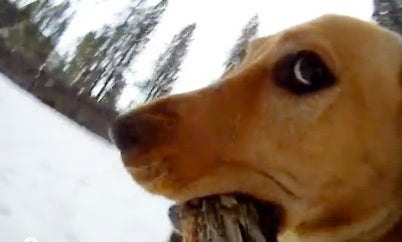 Have you ever wondered what the world looks like from the point of view of an animal? From a pet or wild beast? With the advent of affordable miniature cameras, in the last few years, we’ve seen them attached to just about every critter under sun (or sea). Some were done for research reasons, while others were done simply because a pet owner wanted to see the world through the eyes of their dog. These days, all it takes to get an incredible video from an unusual perspective is a GoPro, and a semi-willing animal participant.

The BBC produced this video as part of its Animal Camera program. Here they’ve strapped a cam to the fastest animal in the world, the Peregrine falcon. With speeds and turns enough to induce 10G of force, you can really get a feel for just how incredibly fast these birds go.

Cormorants are interesting because they bridge the border between air and sea. Capable of diving to incredible depths, this video from the Wildlife Conservation Society tracks a bird as it goes from soaring to swimming. The quality isn’t fantastic, but its a very interesting look at how a cormorant’s body transitions from sky to ocean.

A Beautiful Day at the Dog Park

This comes to us from the official GoPro YouTube channel, and it shows. They strapped a GoPro around the neck of a Great Dane — a dog so big I’d hesitate to call it even a dog — and let it go play in a dog park. The footage is cut between that of humans filming the fun, and some from the dog itself. And boy does that Great Dane look like it’s having a blast.

Dogs are incredibly cute looking critters, there’s no doubt about it. YouTube-user Lorduss1 strapped his GoPro to a stick for his dog to play with, and while this video might not show any great action, just look at that dog’s eyes and mouth as it runs around with a stick. Look at it! It’s freaking adorable!

For some reason, there are a lot fewer cat cam videos than dog cam ones on YouTube — something I’m going to blame on the fact that cats are generally less than amenable to having large hunks of electronics attached to their bodies. This bizarre, low quality video stretches into the realm of lo-fi art. As the cat Squeaky runs around, the camera gets pretty heavily abused, and there’s a fair few glitches along the way.

On the opposite side of the spectrum, you have the ultraslick Cat Diaries, created by none other than Friskies cat food. So yeah, they actually had a budget, with music and special effects, and everything. Even for all its corporate backing, it’s still a good video of a cat’s wanderings, and interactions with other cats. No surprised as to what sort of food it eats, though.

One of the coolest uses of cameras with animals is also unfortunately the one we can’t embedd here. National Geographic’s Crittercam is an ongoing project of attaching cameras to animals. There’s some absolutely incredible footage in that link, including whales, sharks, tree kangaroos and sea lions hunting octopuses.

The Kittycam is actually an offshoot of the Crittercam project, but one focused specifically on domestic cats. Kittycam has been in the news recently because they analyzed the footage, and found that house cats are actually killing a lot more small animals than we had previously guessed. Again, unfortunately, we can’t embed the videos, but hit up the link to see just what your cat gets up to when you let them out for the day.

Eye of the Riley (Runyon Canyon)

It’s a corgi running around a canyon, with a custom made backpack with a GoPro mounted on it. There are few things more adorable in the world than a happy corgi, and Riley seems overjoyed to be off exploring. This video was so popular it even spawned a sequel of more corgi hiking love.

At a very different end of the spectrum, you have this attempt to attach a camera to a large billfish as part of the Billfish Research Project. You only see the footage directly from the GoPro in the last few minutes of the video, but unlike some of these other entries, this was not designed to be attached to the fish for a long time. In fact, it was only in place for 10 minutes, and was used to see how quickly the fish recovered after being tagged.

The BBC’s elephant trunk camera deserves special mention for being quite possibly the least subtle attached camera I’ve ever seen. It’s enormous. However, using a series of cameras designed for elephants, a BBC crew was able to get much closer footage of tiger cubs than they would have otherwise, as the tigers weren’t worried about the pachyderms. Produced for the series “Tiger-Spy in the Jungle”, the resulting footage showed the world a young litter of tigers closer than had ever been seen before.

Not all of these videos are for fun or research — the camera technology being used here serves a much more important purpose. UK firm Wood & Douglas has developed a dog-mounted camera capable of helping to find missing people. Developed for search and rescue situations, the company has created a video camera that transmits footage wirelessly back to a handler, giving a clearer view of what’s they’re facing to potential save a trapped individual.

This footage of falcons from Abu Dhabi just hit the news today, and is another example of the incredible speed and acrobatics of predator birds. They equipped the birds with tiny, helmet-mounted cams, which show them soaring and even fighting with other falcons, it’s powerful stuff.