The fastest full-frame zoom lens in the land has arrived 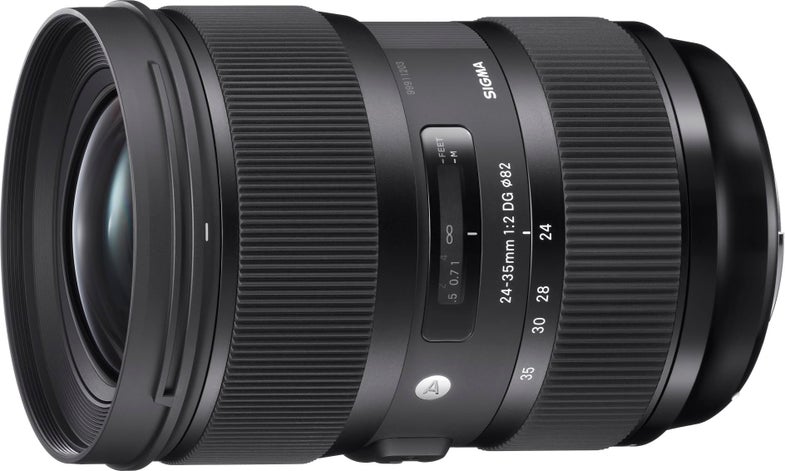 [UPDATE: Official pricing has arrived for this lens and it will be hitting shelves for $999, which seems like a rather insane deal.]

When Sigma first announced their 18-35mm F/1.8 zoom lens for APS-C cameras, it was a pretty big deal. Full-frame shooters were jealous of its super fast aperture. Now, however, Sigma has announced a 24-35mm Art series zoom lens with a constant maximum aperture of F/2. That might look like a typo, but it’s not.

Sigma’s new flagship wide-angle zoom draws on a lot of the same lens tech found in their Art series prime lenses, including the 35mm F/1.4 and the 24mm F/1.4. Both of those lenses are downright excellent in terms of image quality, so that makes this zoom sound extremely promising.

The 24-35mm F/2 Art will have 18 elements in 13 groups, including some large aspherical elements, which pushes the weight up around 33.2 ounces, which makes it more than two full pounds. It’s 3.4-inches across and 4.8 inches wide, so it’s not small either. But, I wouldn’t expect it to be small and it’s important to remember that larger lens body is also what’s affording that full extra stop of light coming in over an F/2.8 zoom.

It focuses down to 11-inches, but interestingly enough, it’s only capable of an F/16 minimum aperture. That may be a bit of a turn-off for some landscape shooters who might otherwise find a high-quality 24-35mm lens extremely appealing.

When you look deeper at the elements, you’ll find an F Low Dispersion element, and seven Special Low Dispersion elements, which is quite a few. The diaphragm is a rounded 9-blade design that should, at least in theory, produce some serious bokeh. And, as you’d expect from a high-end lens, it also has a physical focus distance scale so you can zone focus away during your street photography outings.

At least on paper, this thing looks insanely promising. Not only is it the fastest zoom lens around, but it’s also built with the bones of two of the best new prime lenses we have seen in some time.

The big question, of course, is the price. It’s not unusual for Sigma to announce a product without final pricing and, sadly, that’s the case here. There will likely be no shortage of speculation, though. When they introduced the 18-35mm F/1.8, they surprised a lot of people with a low price tag. This one, however, seems like it would have to be relatively pricy.

I’m pretty excited to get a retail unit of this lens into our test lab, because it could be a real game changer if it lives up to its promises.