Katie Golobic captures the sacred chaos of being a mother

Her B&W images strip away the veneer of perfection in favor of real moments. 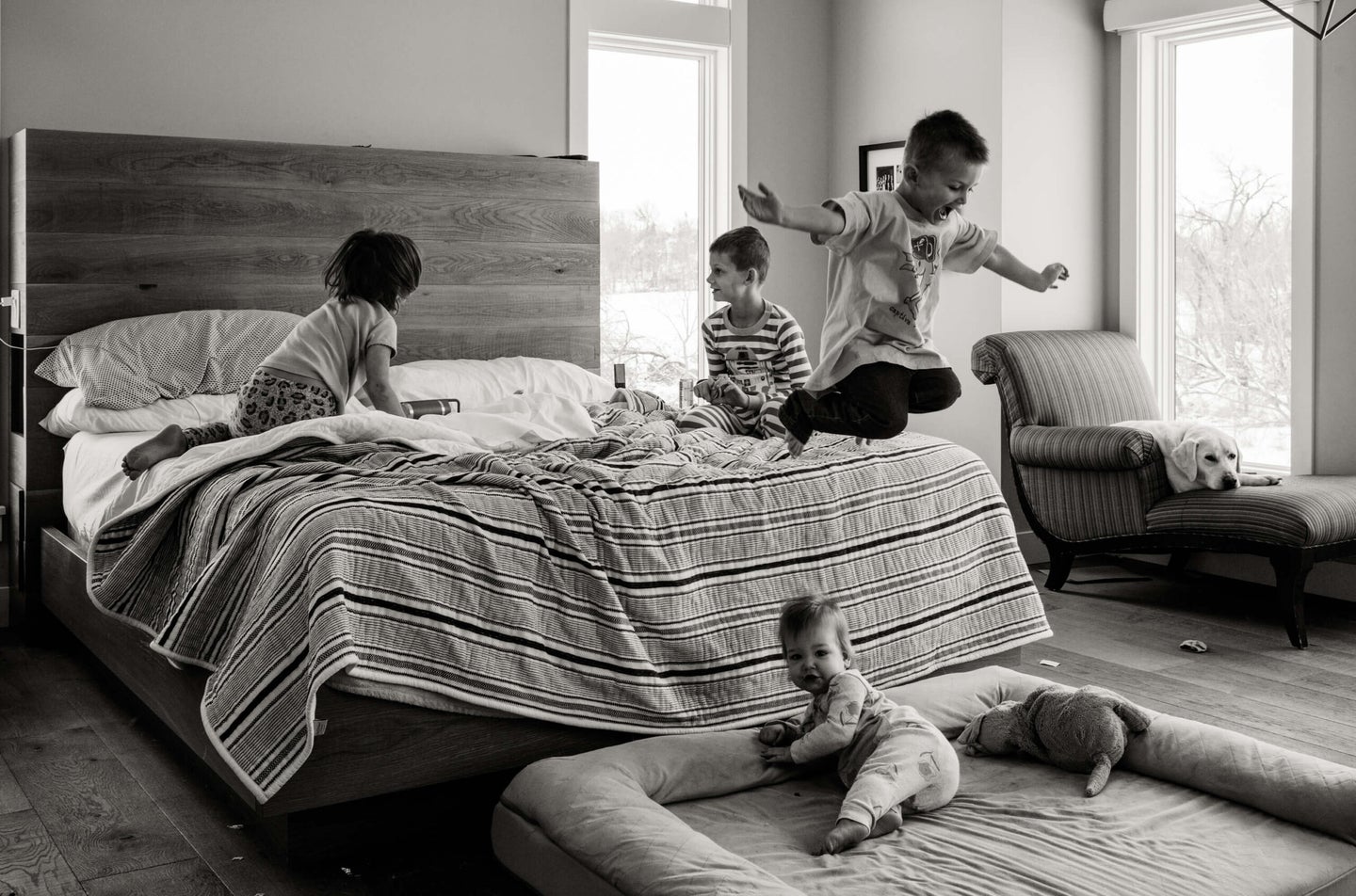 Family portraits often bring to mind a smiling family in their Sunday best, looking at the camera in a portrayal of a picture-perfect life. But for Iowa-based artist Katie Golobic, these aren’t the images she lives for—though she does admit to having a few of them on her walls. One look at her own body of work reveals, rather, a photographer in the pursuit of extraordinary, decisive moments between the chaos and mundanity of motherhood.

“My work is my children,” she shares. “This is why I photograph. I photograph because of them. If they weren’t here I probably wouldn’t be photographing as much or with the intent that I do.”

Golobic’s artist statement boldly proclaims that her work is a love letter to her children. Her Leica M10 Monochom is always within an arm’s reach, and with it, in stark B&W, she faithfully documents this season of her family’s life.

“The timelessness of it, and stripping away…You see the moment for what it is, and you’re not distracted by anything else,” she explains. “It helps me convey what I want to share with the world. That timelessness is important for me.”

Her current running series, “Saturday Mornings on Rosedale,” is an ode to childhood and all the play, excitement, adventure, chaos, and wonder that comes along with it. She plans on working on it as long as her children allow it.

“It’s really about me kind of watching the scenes within our house unfold, and elevating some of the everyday moments that happen,” Golobic elaborates. “Saturday morning…that’s often the time when at least [we’re] all together. I just wanted to evoke the feeling of being at your home with your children, and a lot of people think of Saturday morning cartoons, or Saturday morning pancakes. It’s just kind of that feeling.”

Though she treasures the story behind each photograph, there is one that stands out among the rest: A snowy day, bitterly cold, and a walk down the driveway to retrieve the garbage cans, if only to get outside for a moment. The effort resulted in a joyfully chaotic scene: Her son, then three, attempting to haul the can up the driveway, his siblings in tow.

“It feels like one of those old paintings, Norman Rockwell, this classic Americana life,” she recalls. “I love how the house is just ever so tilted. That’s what it feels like. It almost feels perfect, but life is not, and as a mom, it’s not. It’s messy, there’s chaos happening. That best encapsulates how I enjoy photographing, photographing the chaos. It’s still beautiful, you know?”

So what does this love letter entail? These photographs aren’t doomed, like so many others, to be sucked into the vortex of .jpegs that never see the light of day. Rather, Golobic prints albums, each year amassing favorites for each child that they’ll receive one day.

“It’s my gift to them [to say,] ‘It’s been a blessing to be your mom, and it’s just created magic,’” she says. “I post less and less online these days, only just because I want it for them. I want them to have these sacred moments for themselves, and I’ll share some great ones here and there. But, it’s really for them.”

Striking a balance between mothering and photographing

To create her images, Golobic usually reaches for her Leica, mounted with a 35mm lens. To my surprise (and admiration), she chooses to work with manual focus, despite the fact that her subjects are young (ranging from two to nine years old) and always on the move. She’s learned to embrace things like motion blur, but also admits that working within the constraints of her medium has sharpened her focusing skills. At the end of the day, though, it’s not a pursuit of perfection. It’s a documentary pursuit of love.

The mother of four didn’t seriously, as she says, begin photographing with intention until about five years ago, when the loss of a newborn spurred her to double down on documenting her family. Golobic soon found it was also a way to keep her sanity on some days.

“It turned into a therapeutic thing for me,” she remembers. “It’s an easy way to pass time as a mom. You’re just kind of standing outside in the cold, watching them. It’s like, ‘How can I do this, but still feel like my brain is not turning to mush?’ Then it becomes kind of a game; it becomes fun to compose things differently, or watch for the cool light.”

Now she walks the line between mother and artist, always at the ready to record whatever comes her way. Her documentary approach means that she never tries to alter a scene, and sometimes that results in her quickly making a photograph before the “mom side” kicks in.

“A lot of the time when the mood strikes or I hear something happening, I quietly try to just see what’s going on,” she explains of her creative process. “For me, it’s authenticity too. I’m not trying to alter a scene. Safety obviously takes precedence; the mom gene kicks in really fast. But sometimes it’s like, ‘Oh my gosh, this is really cool,’ click, and then, ‘Okay, hey, let’s cut that out.’”

When asked who she does this for, the creating, the photographing, the answer always leans two ways. This is her work. Being an artist is a part of who she is—and it always will be. But there’s no doubt that her family is the “why” for it all.

“At the moment I do it for myself because it artistically fulfills me. But at the end of the day, I’m doing this for them, you know?”

Encouraging parents to document the real and the chaos

“I [was] so frustrated before. My house wasn’t pretty and the kids weren’t dressed nicely. So it was like, ‘No, they don’t have to be, it doesn’t have to be. These are my people, this is where I’m meant to be.’ I love the mundane and the messiness; that’s the kind of person that I am. I talk about the crap. Motherhood is beautiful, it’s this amazing gift, but every day is not sunshine and roses, and that’s okay.”

For parents wanting to document their own families, Golobic encourages them to just start. With a phone, a point and shoot, a film camera, it doesn’t matter. Get out there and photograph the messy. You won’t regret it.

“You will never have this moment back, and life changes in an instant,” she says. “Photographing does kind of take you away from the present, but for me, it does record that present moment, and makes you remember, ‘Wow, that happened,’ or, ‘Wow, look at who all got together.'”

On working with kids—yours and others’

One thing Golobic is adamant about is that her children have a say in the images she creates. If they say no, then it’s a no. She doesn’t force it.

“Your children take the lead,” she asserts. “If they say they don’t want their photograph taken, don’t take it. I’ve never forced my kids to take a photograph that they didn’t want to take. I’ve never made them do something they didn’t want to do, and that’s really something that is at the core of my artistic process, not altering or directing a scene. That’s not my nature, but also my kids never listen to me anyway.”

Of course, sometimes we’ve envisioned a composition that we really hope plays out, or hope that we can somehow direct, to no avail. Don’t be discouraged. Roll with chaos, and something good will come.

“Embrace what is in front of you and just take their lead,” Golobic advises. “Honestly, what you expect them to do will not happen, and what they end up doing is probably more gold and more brilliant than you could even hope for.”

And for the parents who need an extra nudge, who might feel that everyday life isn’t fantastic enough to warrant the effort, she acknowledges that though, at times, it feels like “nothing special,” parents have a unique window into their families’ lives—and that itself is extraordinary.

“You know [your family] better than anyone else. That’s what I try to remember when I’m grouchy and haven’t traveled anywhere. As mothers…only we know this.”